Father’s Day for those dads who have lost a child 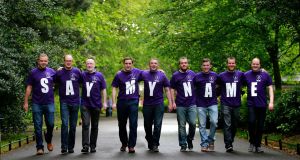 On Father’s Day, Ken Walsh will receive a card from his three daughters. Lesley-Ann (12) and Niamh (9) will write the card. Their baby sister Caoimhe died as she was being born in 2012, but her siblings always ensure she is included in gifts and messages.

“I have three kids, but one of them can’t be with me for Fathers’ Day,” says Ken. “However, she will be very much on my mind.”

Ken and his wife Linda were expecting their third child when a 20-week scan at Dublin’s Rotunda Hospital showed a heart abnormality. After amniocentesis testing they learned their baby had Edwards syndrome.

“They call it an incompatibility with life,” explains Ken. “We knew at 23 weeks that she wouldn’t survive outside the womb. We treasured every kick and every moment as we were never sure if it would be her last. Linda carried her until 39 weeks and was induced on November 12th. We held out hope that we would get a small bit of time with her, but unfortunately that didn’t happen.

“People often say that’s awful, how did you mange for 17 weeks. And I say, what about the couples that walk into the hospital expecting to come out with a newborn baby and don’t? We had a chance to plan things and do things our own way for the time that we had with her. We’re very grateful for that.”

For Eanna Daly, Father’s Day is never an easy day. “I’ll just try and keep busy,” he says. Previously, his wife Teresa would have given him a card, but now he finds it’s easier not to get one.

However, his son, Eanna Eoghan, will be in his thoughts, as he is every day since being stillborn in 2014, and they will visit his grave close to their home in Gurteen, Co Galway.

The couple were expecting their first baby when a routine scan at 34 weeks showed excess fluid, their first indication that something was wrong. A series of scans and amniocentesis followed, with hopes raised and dashed and raised again. Finally, during an appointment with a foetal specialist, the couple learned there was no longer a heartbeat. They had lost their baby.

“We were referred back to Portiuncula Hospital in Ballinasloe and thought Teresa would go straight in to have the baby, but the pastoral care worker there, Niamh Brennan, was brilliant,” recalls Eanna. “She explained what we could expect and told us to go home and get our heads around what had happened. We spent that time together and my parents came down to visit. Everyone rallied around us. We now had to plan buying a plot instead of a cot”

The following week Teresa returned to hospital to be induced, and baby Eanna Eoghan – named for his father and his maternal grandfather – was stillborn on Tuesday, October 14th.

Both men say they benefited hugely from the support provided by their hospitals, and from Féileacáin, the Stillbirth and Neonatal Death Association of Ireland. The charity sent memory boxes for their children, and organised photographers to take family pictures.

“The memory box had kits for foot- and handprints, and a hand-knitted blanket and teddies,”recalls Ken. “It was all about us garnishing as many memories as possible in the short time we had with her. It felt surreal, but was very, very welcome when we realised how useful everything was. She was actually buried in the blanket.”

Having photographs taken after the birth was more difficult. “I felt very uncomfortable because I didn’t like the whole idea of modelling, of posing with her,” says Ken. “I wanted it to just be us. However, looking back those photos are priceless.”

“When they suggested photographs I thought it was mad,” adds Eanna. “Now, in hindsight it’s brilliant. We have pictures, and mam and dad have pictures. She took photos of us and the baby, and the baby on his own, and even with an eternity ring we had got.”

Ken’s most treasured memories are the two days Caoimhe spent at home before her funeral. “She was in the front room here when everybody called. We also brought her up to our room for one of the nights and the girls slept in with us.”

Eanna and Teresa spent two nights with Eanna Eoghan at the hospital where Féileacáin supplied a Cuddle Cot, a Moses basket containing a cooling unit that allows families spend more time with babies after death.

“The hospital has a special room so we could stay with him. My parents were there when he was born and our families came in to meet him. On the Thursday we felt it wasn’t fair to keep him with us any longer, and we had the Mass in the little chapel, which was lovely.”

Both men are now promoting Féileacáin’s “Say My Name” campaign for Father’s Day, asking people not to avoid talking to bereaved parents about their loss.

“The best way to honour a father’s child is to say their name,” explains Ken. “Talking about your children helps the healing process. When other people come up to me and mention Caoimhe by name, that’s fantastic for me.”

Eanna agrees. “It’s brilliant when someone talks about Eanna Eoghan. Teresa’s niece is particularly great. Most days we mention him. We don’t want him to be forgotten.”

The couples didn’t receive counselling but they attended regular Féileacáin meetings. “It’s a club that no one else wants to be in, and nobody understands unless they’ve been through it, that’s why it helps so much,” says Eanna.

What advice would they have for other fathers who find themselves bereaved in similar circumstances?

Both men agree that focus is often on bereaved mothers, and men feel they need to keep strong for their partners. “I’d say to men, don’t be offended when not too many people say ‘how are you?’,” says Eanna.

Taking time off work to grieve with and support your partner is very valuable, he adds. “Also, don’t be afraid to ask for help. It’s only in hindsight that I know I probably could have done with talking to someone. Both our families were great, but the two of us if we had a few rough days would say we hadn’t grieved properly.”

Ken says as a father and husband his first reaction was “how can I fix this?”

“But there are some things we just can’t sort. That’s one of the hardest parts. The message I would give is don’t try to fix things, just be there. And don’t be afraid to pick up the phone. There’s lots of support out there now.”

Missing your grandchildren during lockdown: ‘The pain is physical’
10