Break through the back pain barrier that stops you exercising 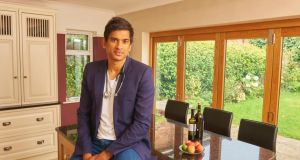 Dr Rangan Chatterjee of the BBC’s ‘Doctor in the House’

Ten years of back problems took their toll on Dr Rangan Chatterjee. He was always in pain, which added to the stress of the GP’s work, but worse still he had to give up playing competitive squash. He visited physiotherapists, musculoskeletal therapists and even a spinal surgeon, among other professionals, to little avail.

“I got short-term relief at best before the pain came back. Some people said I’d just have to put up with it as I’m 6ft 6½in, but I was driven to find a solution,” he says.

Adding to it all was the fear of pain and also of doing more damage to his back. “I would never lift a sofa to move it. Fear of pain was a big hurdle for me to overcome,” he says. This is a fear shared by many, given that about 80 per cent of Irish people, including myself, suffer from back problems at some time in their lives.

For many, it stops them exercising and more importantly from taking part fully in their lives, whether playing with the kids or taking part in sports. But it doesn’t have to be that way for everyone.

There are serious conditions that preclude exercise, however, so it is best to have those ruled out by a doctor first. “Only about 5 per cent of back pain requires surgery and only about 1 per cent has a serious or sinister cause such as a tumour,” says Alison Quinn, a physiotherapist with the Rehab Rooms in Blackrock, Co Dublin. But for most of us, the pain is non-specific, so relief may be found.

If you pay attention to the small, everyday things, downstream the consequences can be mind-blowing”

As anyone who watches Doctor in the House on the BBC will know, Dr Chatterjee is not one to give up. In that show he spends weeks with a family so he can get to the bottom of their health issues, whether it is unexplained weight problems, severe headaches or back pain. Over the following months, he looks at diet, medication and lifestyle, with much success.

For Dr Chatterjee the answer to his own pain came with a visit to movement specialist Gary Ward, who is a trained sports therapist. He examined Dr Chatterjee’s gait. “No one had corrected my movement pattern, which was part of the problem. Gary said, ‘Your right foot is not working properly.’ He gave me a series of exercises to do, which takes me a maximum of five minutes each morning while the coffee is brewing – you can see me do it on my blog – and the pain started to lift almost immediately. ” Dr Chatterjee is back playing squash.

A recent patient was helped by working on movement, doing tai chi to de-stress and taking vitamin D. “As it was for me too, stress was not the cause of pain, but it can make it worse,” he says. “My philosophy is to optimise everything we can and take pressure off the system. If you pay attention to the small, everyday things, downstream the consequences can be mind-blowing.”

Dr Chatterjee uses a standing desk when doing administration or on the phone, gets his 10,000 steps a day, and likes playing in the garden with his children, as well as going to the gym. It all helps, he says. “I’m still amazed at how simple changes to the working day can make a difference. It helps me feel I’m doing something proactive too.”

Quinn says her experience is that people are put off exercising when they have pain, especially in the back or the neck. “Not only are they afraid to exercise but they are afraid to move even at a basic level,” she says. “I’ve seen people who are afraid they will end up in a wheelchair because of what they have seen on a scan.”

Many don’t realise that exercise could be helpful. “Someone with a weak back may benefit from Pilates and specific back-strengthening exercises,” she says. “A person with chronic pain who finds it hard to tolerate weights or Pilates may benefit initially from a walking or hydrotherapy programme.”

Quinn agrees with Dr Chatterjee that one size doesn’t fit all. “The type of exercise depends on where the pain is coming from and what symptoms the person has,” she explains. “For example, if a patient has significant leg pain or sciatica type symptoms, you would not advise them to use weights initially, but you might get them to do specific exercises that help to ease the nerve pain and decrease muscle spasm.”

Those with very stiff backs may benefit more from a flexibility programme. “Others may have back pain due to weight issues,” says Quinn. “So it may be more appropriate for them to start with cardiovascular exercise to help with weight loss in addition to dietary changes.”

In my case, I had had intermittent back pain since I was in my 20s. After doing my training in fitness, it became chronic and intense. An MRI scan highlighted the source as inflammation in my lower back pressing on a nerve going down my leg. It was six months before I could do more than easy walking and trying to stay seated was torture. Painkillers didn’t seem to work for me, though I was afraid not to take them in case the pain worsened. But slowly, with the help of twice-weekly physiotherapy sessions in addition to Pilates, the pain started to recede.  I will never be a squash player, but I’m now stronger than ever – and have abs of bamboo, if not steel.

A report published in January, 2017 through the US National Library of Medicine (Pubmed) on a number of reviews concludes: “The evidence suggests physical activity and exercise is an intervention with few adverse events that may improve pain severity and physical function, and consequent quality of life.”

Pain can be draining, debilitating and dispiriting. So if it is keeping you from being active, you might want to get help to see if you can tackle the cause, rather than just the symptom.

Easy ways to take the pressure off