‘My husband will carry out instructions but why must I ask in the first place?’ 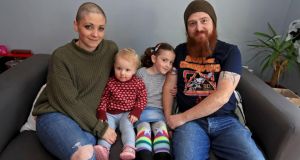 Geraldine Walsh: “As the matriarch of the house, there appears to be an unwritten rule engraved on my very bones.” Photograph: Donall Farmer

My house is not clean. It’s tidy, but not necessarily clean to the level of being disinfected to the satisfaction of Mrs Hinch. My floors have an invisible layer of dirt that I know is there but choose to ignore. The kind of dirt that shows up when the sun blisters through the window mid-morning, smudge marks in all their glory, leaving the tell-tale blackness on the bottom of white socks turned grey – no matter how much Vanish you throw in the wash.

Mopping the floor has been strategically put to the bottom of the list because we all know the toddler will have the perfectly polished and disinfected floor filthy in 3.45 seconds so, what is the point?

When you’re mentally overloaded with a list longer than you care to admit or have the ability to get through, your standards drop and priorities change. The three-second rule turns into a two-hour rule.

And yet, I know the dirt is there.

Knowing it is not going anywhere goes against my natural instincts of wipe, clean, dust, tidy, order, order, order. I work from home, meaning I see the 273 jobs that need to be done daily. And I do as many as I can without ignoring the kids or burning the dinner. My husband works outside the home, meaning the house does not necessarily fall under his radar when he walks in the door. Not because I have the house ship shape in time for the kids to fall into bed and the mess has disappeared, but because his eyes glaze over any disorder spiralling through the house.

He does his share. Of course, he does. Most men do.

Women are inundated with the mental load of remembering. Simply that. Remembering it all needs to be done, whether its done or not

He will put the dishes away, tidy up the kid’s books, bring them to bed and heat up the obligatory night-time milk. He is the dedicated mower of the lawn, drags the bins to the gate, and complies with the laws of heavy lifting better than my petite frame.

Most importantly, he will dutifully carry out the orders I ask of him.

But why should I have to ask in the first place?

As the matriarch of the house, there appears to be an unwritten rule engraved on my very bones. The home is mine to sprinkle the magic fairy dust of order and cleanliness, because it is I, who will remember: the uniforms need to be ironed, the lunches made, the weeds pulled, the bins put out, the dishes washed, the playroom reorganised, the bedsheets changed, the mattress flipped, the chalky sour milk needs to be wiped away from the bottom of the fridge, the lint removed from the dryer, the dirt cleaned off the window frames, the bathtub rinsed out, the tinfoil changed on the oven trays, the weekly shop bought.

I will remember the dates of vaccines, school tours, playdates, birthdays, and to cancel the milk order. And I will hunt out the smell of stale milk that lingers somewhere in the sitting room.

Women are inundated with the mental load of remembering. Simply that. Remembering it all needs to be done, whether its done or not. And it’s exhausting.

If I can veer into diplomacy for one moment, my husband can adequately clean the house, which I am grateful for, but the ensuing battle of who ticks more chores off the list is won by me every time. I am that bit more conscious of the list and how quickly it grows.

I know to time the washing machine, so the spin cycle is finished before the thundering drum wakes the baby from her nap. I know to buy loo rolls before we’re on the last sheet. I also discard the empty tubes rather than leave them sitting in the bathroom.

I realise that not every mother is the household manager and that there are plenty of dads who take on the mental load. Yet, on average, it’s the woman in a relationship who takes control quicker of the daily chores. Men were not specifically raised to bear the load and we’ve learnt to be tolerant of each other’s expectations of household duties.

The argument is less about our partners physically loading the dishwasher and unloading the washing machine, although no one is going to stop them. Rather it is about recognising the mental load we as mothers carry and ticking a few items off our to-do list without being asked.

If I was working outside the home, the situation remains the same. The rules of the house are not generally specified so what is enough in his book is not necessarily in mine. This gender imbalance has been forged by years of social conditioning. We have different priorities and a varying awareness as to what is going on in the family.

The pressure to be the one who knows, remembers, and sees everything that needs to be done is overbearing

While I am thinking about when the kids last took a bath, had their nails trimmed and if they’re getting enough vitamin D, he will be more conscious of the fact the plumbing needs upgrading or that the scart lead needs to be changed on the playroom TV. And yet, it will fall to me to get quotes and the next time I’m running errands to pick up a new scart.

It suffocates us in a way, because the pressure to be the one who knows, remembers, and sees everything that needs to be done is overbearing. I don’t mind staying on top of the house. The cleaning and tidying away is not what creates the burden. It’s the necessity to be the one who recognises it all needs to be done and remembers to finally do it, ticking off the mental list that replenishes itself instantly.

So, I drop my standards because I can’t keep up with the mental load of carrying a household with multiple personalities all vying for me to remember something else for them. The floor will stay dirty until the mud prints become too obvious or someone else in the house takes out the mop.

Which is unlikely to happen.