Fertility treatment and coronavirus: ‘The Covid-19 baby boom jokes are hard to take’

Fertility clinics reopen next week. What does that mean for those awaiting treatment? 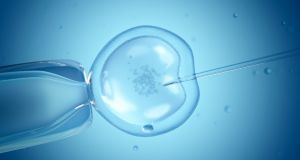 In vitro fertilisation (IVF). The majority of Irish fertility clinics are planning to reopen from next week.

“The rest of the country only now have the experience of living with life on hold – something I’ve been dealing with for nearly three years, as well as my grief for my lost babies. This lockdown will end for most soon. Not so for us,” says Elizabeth.

The emotional and psychological toll of undergoing fertility treatment is, she says, its own kind of “lockdown”.

In March, what Elizabeth describes as the “lonely and heartbreaking wait” for a baby was thrown into further uncertainty, when the European Society of Human Reproduction and Embryology (ESHRE) recommended that “all fertility patients considering or planning treatment, even if they do not meet the diagnostic criteria for Covid-19 infection, should avoid becoming pregnant”.

Patients whose treatment was already under way were advised to defer. But no such advice was given to those who did not need assisted reproductive treatment (ART) to become pregnant.

In March, the European Centre for Disease Control advised that there is “no current evidence .. that infection with Covid-19 during pregnancy has a negative effect on the foetus … no evidence of transmission of Covid-19 from mother to baby during pregnancy”.

Fertility clinics were not originally classified as essential services. But 'the longer this goes on, the more essential we become'

This caused distress and confusion for those undergoing treatment. “I feel very discriminated against because there was no advice for ‘normal’ women not to get pregnant,” says Elizabeth.

Dr John Kennedy, medical director of the Sims Fertility Clinic in Dublin, says that the decision by Irish clinics to close was made in the national interest. “Nobody actually formally directed us to close. But of course it is impossible to practice fertility treatment and maintain social distancing.”

Fertility clinics were not originally classified as essential services. But “the longer this goes on, the more essential we become,” he says.

Last week, the ESHRE recommendations were updated to state that the pandemic is stabilising and “the return to normal daily life will also see the need to restart the provision of ART treatments”. The majority of Irish fertility clinics are planning to reopen from next week.

Even so, there remains a lot of uncertainty for the estimated 5,000-6,000 people who undergo fertility treatment in Ireland each year. Even before Elizabeth’s donor egg treatment was postponed, she had already experienced long delays – including the nine months it took from her initial consultation to embryo transfer, a cycle which sadly ended in miscarriage.

At 43, she is acutely conscious of time passing. “I haven’t had any updates from my clinic, just that they’ll be contacting everyone. I’m really hoping I can get started in June. Time goes by very slowly for women like me, and there can be many obstacles and delays.”

The jokes about “a Covid-19 baby boom are hard to take,” she says.

“It’s time-sensitive, especially for the patients in their 40s. It’s enough to make your mental wellbeing really poor,” says Dr Bart Kuczera of the Beacon Care Fertility Clinic, which will also reopen next week.

But while the clinic will be open, he warns that “you won’t be able to start on Tuesday and have all the services available on Wednesday”. Fertility cycles follow human reproductive cycles. “So it will take at least a month for everything to be back.”

For the clinics to reopen, major changes have had to be made in their operation, says Kennedy. “We’re completely changing how we work: longer days with less staff; there’s going to be social distancing where possible for staff and patients; there’s going to be appropriate use of personal protective equipment (PPE) which we’re in the process of sourcing.”

Consultations will be virtual where possible, and some supportive drug treatments like immunotherapy and steroid treatment, won’t be immediately available. “All of the core things – egg collection, ICSI, pre-implantation genetic screening – will be proceeding as normal.”

The early advice from ESHRE, that candidates for fertility treatment should avoid becoming pregnant, has left some women with lingering worries about potential risks. “Every answer anybody gives has an asterisk beside it. We just don’t know for sure. We think there aren’t any impacts – unlike Sars and Mers, there doesn’t appear to be an increased risk. It all appears safe,” Kennedy says.

Even when the Irish clinics are once again up and running, for those had been undergoing treatment abroad, there are likely to be further delays.

I’m 42 and started this journey over two years ago. I never ever thought I would be still here

Miriam travelled to Prague in the final days before international flights stopped so that she could undergo egg retrieval. She is very grateful for the care she received and has no regrets about her choice to undergo IVF there. But, she says, “now we have no clue when we might get there to retrieve our embryos. It costs approximately €1,500 to have them shipped, and who knows the risks of that. I hope the governments of both countries recognise the trauma the ESHRE [recommendations have] caused to women like myself.”

The Irish Times recently published a letter from another woman, Sarah K, describing the impact of the closure of clinics on her. Sarah K says now: “Along with the universal uncertainty ... fertility patients have had to bear the added uncertainty as to whether this delay in treatment will affect their chance of becoming a parent. I’m 42 and started this journey over two years ago. I never ever thought I would be still here, in this horrendous, anxiety-filled holding pattern.”

As with everyone who spoke to The Irish Times, Sarah K is relieved at the updated ESHRE guidelines. Still, the waiting game goes on. “I’m still not sure as to when I will get to do my embryo transfer. I can only hope it is soon. Some might think it is only a few months’ delay, but for me every hour, day, month delay is an hour, a day and a month I won’t have with my much longed-for child, and my parents won’t have with their much sought after grandchild.”

Our children have sacrificed so much – educationally, socially and mentally
3