Coronavirus: Contact tracing taking ‘too long’ and app should be considered, GP says 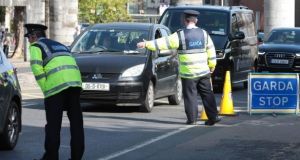 The only way to improve and speed up contact tracing is by using technology, Dr Liam Glynn says. Photograph: Collins

Contact tracking apps will have to be considered to determine the level of community transmission of corona virus, a GP and academic has said.

Dr Liam Glynn, who has been tracking the spread of Covid-19 in Ireland, said that while the speed of testing had improved, there was still an issue with delays in contact tracing.

Dr Glynn, who is the Professor of General Practice at the Graduate Entry Medical, University of Limerick, said the issue of the virus in nursing homes and residential care homes was being tackled, but the issue of community transmission was still a concern as for every person identified there were still 10 to 20 that had not been identified.

Dr Glynn’s comments come as the number of new cases of Covid-19 reported daily will have to move in a consistent downward trajectory before any substantial lifting of restrictions will be considered, Opposition party leaders were told in a briefing by public health officials on Wednesday.

Last night, a further 376 Covid-19 cases were reported, more than half of which related to nursing homes. The total number of confirmed cases has now exceeded the 20,000 mark, and stands at 20,253.

The deaths of another 31 patients diagnosed with Covid-19 were reported by the National Public Health Emergency Team (NPHET) at its briefing on Wednesday, bringing the total death toll in the pandemic to 1,190 in the Republic.

“The problem is we have to continue to suppress the virus to save lives, but we can’t suppress it too much or we won’t have herd immunity,” Dr Glynn told Newstalk Breakfast.

Dr Glynn, who practices as a GP in Ballyvaughan, Co Clare, said he recently sent a patient for testing. He made the appointment in the morning, the patient was tested that afternoon and the result was back the next day. But testing was only one link in the chain, he said. “The weakness in the chain is tracing. It is taking six days and that is too long.”

A contact tracing app that can identify 50 per cent of a person’s contacts “at the touch of a button” would have to be considered despite concerns about privacy, he said.

“The whole system is as weak as the weakest link.”

The only way to improve and speed up contact tracing was by using technology, he said. It was essentially “a hand shake between phones” using bluetooth technology. “That will allow us to ramp up efficiency.”

Dr Glynn said that the efforts taken to date by the Government and the response of the public had helped suppress the virus. If that had not happened hundreds more lives would have been lost and there would have been more pressure on the health system.

Tackling community transmissions was going to be “a complicated decision,” he warned. “There is no good way to do this.”

A drug used to treat Ebola patients has shown “very promising” early results in a trial of people admitted to hospital with coronavirus, scientists said. Patients given remdesivir had a recovery time that was almost a third faster than those given a placebo, the first results from an international clinical trial showed. More than 1,000 patients have been recruited across the world, including 46 from the UK, for the Adaptive Covid-19 Treatment Trial, which began at the start of April.

Prof Paddy Mallon, consultant in infectious diseases at St Vincent’s Hospital in Dublin has said that reports of the success of remedesivir in treating Covid-19 were encouraging. However, he cautioned that peer reviews will still have to be completed.

Prof Mallon told RTÉ radio’s Today with Séan O’Rourke show that the drug is traditionally used for viral infections and it blocks the ability of the virus to replicate. “This is good news,” however, the results will still have to be validated and research cannot rely on just one trial, he said.

Prof Mallon said that Ireland is very active in the search for a cure for Covid-19 conducting stand alone trials while also participating in larger international trials.

“There is a lot of work going on in the world, but we need research and further studies to be up and running rapidly.”

Prof Mallon said he thinks there will be a treatment drug for Covid-19 before there is a vaccine and his hope is that in the short term the medical profession will be able to control the virus, not eradicate it.

While the number of new cases would need to move towards the lower hundreds before any substantial lifting of restrictions will be considered, public health officials said in Wednesday’s briefing, they also warned politicians that there is “no single magic number” as the case figures could be skewed by the number of tests done and reported on a particular day”.

Some sporting and recreation facilities could be reopened in the initial phase of the plan to ease coronavirus restrictions under draft proposals being worked on by officials.

This would only apply to such activities where social distancing can be maintained, such as tennis courts and golf courses.

The draft plans are also understood to allow some sports team training in the initial phase – but only where there is no contact, where the groups of people training are very small and social distancing can be maintained.

While the latest drafts of the plan do not specify dates, earlier drafts spaced the phases out in periods between early May and September.

NPHET is expected to sign off on a final version of the plan at a meeting on Friday, before it is sent to Cabinet for consideration.

In tandem with public health advice on how to ease restrictions, the Government will also announce some policy measures to help families and businesses.

Some sources suggested such a package could be announced to help “sugar the pill” of little or no restrictions being lifted after May 5th, with hope still held out that recommendations around the over 70s may be eased.