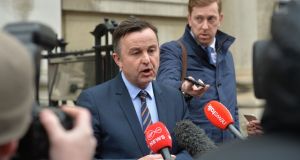 BPFI chief executive Brian Hayes; “These measures may need to remain in operation for some time or may only be lifted gradually with an unknown impact on the economy going forward.”

Irish borrowers affected by the economic crisis caused by Covid-19 will be able to extend breaks on loan repayment from three months to six after banks and other mortgage lenders and servicers signed up an extension of a relief scheme announced last month.

Over 65,000 mortgage payment breaks and more than 22,000 small- to medium-sized enterprise (SME) payment pauses have been granted since the industry agreed as a whole to provide relief on March 18th, Banking & Payments Federation of Ireland (BPFI) said on Thursday.

“The existing public health measures put in place by Government, aimed at mitigating the impact of COVID-19, have been extended since the original BPFI announcement of payment breaks up to three months,” said BPFI chief executive Brian Hayes.

“These measures may need to remain in operation for some time or may only be lifted gradually with an unknown impact on the economy going forward. BPFI members strongly appreciate the severity of the impact on families, individuals and businesses and it is for this reason, that we believe an extension of the existing payment break beyond three months may be required by many customers.”

Lenders that have signed up to offer payment breaks include the five main Irish retail banks, non-bank lenders such as Dilosk and Finance Ireland as well as a group of loan servicing firms that manage loans on behalf of investment firms – or so-called vulture funds – that snapped up tens of thousands of distressed Irish loans in the wake of the financial crisis.

The Central Bank said that borrowers availing of payment breaks of up to six months will not be classified as having missed payments on its Central Credit Register, while it is understood that the Irish Credit Bureau will adopt the same stance.

“At the end of the agreed payment break, the Central Bank expects borrowers who can return to full repayments to be given the option to either repay the loan within the remaining term or extend the term of the loan,” the organisation said.

However, banks will be expected to start assessing how parts of their loan books will ultimately become impaired as a result of the economic shock and start taking loan loss provisions in their accounts. The Central Bank said that provisions do not need to be set at this stage against individual loans.

Almost 600,000 are currently receiving special Covid-19 unemployment payments in Ireland, while nearly 350,000 workers are having their pay subsidised by a Government scheme aimed at helping companies that have been hit by the crisis as much of the economy has been put into lockdown.

BPFI said that banks will be “actively contacting” customers who have availed of payment breaks in the coming weeks and months about the possibility of extending their new arrangements. “Customers do not need to contact their lender. Providers will contact customers,” Mr Hayes said.

Payment breaks of up to six months will also be offered to Covid-19 impacted borrowers who have yet to apply for relief.

Meanwhile, European credit ratings firm Scope said in a report on Thursday that it expects some payment breaks to evolve into loans moving into default.

“We expect a rapid deterioration in mortgage defaults as household income significantly shrinks, especially among re-performing loans,” Scope said, referring to loans that had been restructured following the financial crisis and are where borrowers are meeting their new terms.

1 Race against time: The inside story of Ireland’s Covid Tracker app
2 Ryanair and Aer Lingus cut flights as travel restrictions continue
3 Dublin City Council brings new challenge to Ronan dockland tower
4 Judge strikes out Clontarf residents case against development
5 EU court rejects data transfer arrangement with US
6 Blockbuster Schrems decision to impact nearly every business
7 ‘I set up an investment club many years ago with a bunch of friends’
8 The 7 key things the Government has to consider to jump start a recovery
9 State gets €8.8m EU grant to study Dart expansion into Kildare
10 UK developer gets green light for 245 new homes in Lucan
Real news has value SUBSCRIBE