‘A life-saver’: The daily online exercise class for older people 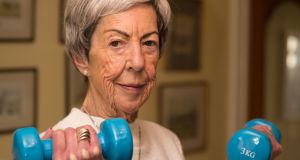 The old saying of you never know what is going on behind closed doors has never been as true as during this time of Covid-19. Anne McGuire has her daily schedule in rhythm now. She has framed her day around her morning exercise routine.

“I wouldn’t get up until after Tubridy is finished,” she explains. “Then I’d potter around, exercise and have lunch.”

By “exercise” she means participating in the 11am workout session broadcast online by Siel Bleu. Anne is a retired primary school teacher, cocooning alone in Navan and is living with non-Hodgkins lymphoma. She is also used to being a bundle of activity.

The new dispensation was tough for Anne to get her head around. Her nephew mentioned the online classes in passing. Each day features a different instructor. There is no need for previous experience or fancy gym stuff. Immediately, Anne was hooked. She could knock down a 15km walk without a thought. But this was new.

“What I discovered was that I had so many dormant muscle groups. So after five weeks, I have found my posture, my balance . . . my mental state is so much better. And I would make note of the exercise I had difficulty with and I would practise that. Different trainers would concentrate on different parts of the body.

“This is what amazes me, having been a teacher myself, is that it is so well structured. Because they must have been thrown into it. And it has made me diet-conscious too. I was making sure I had plenty of protein because I was moving to two meals a day: brunch and an evening meal. So there were two pluses for me straight away: structure and diet. And, of course, the exercise.”

When she started the class, it was during the cold snap of late March. “The exercise warmed me up in the morning and I’d light a fire and relax in the afternoon. So there was a bit of a saving on heating too!”

We are using tins of beans, rows of cling films, a sweeping brush and utilising household items

Siel Bleu is one of many community initiatives forced to instantly and radically switch frequency after the national lockdown took hold. Before the pandemic, it had provided instructors to give physical classes for more than 6,000 people around Ireland, directed at older adults and patient groups. The switch to online classes – at 11am and 2pm – is attracting about 2,000 people to each session.

“We are using tins of beans, rows of cling films, a sweeping brush and utilising household items so you don’t have to rush out and get dumbbells and kettle bells and these kinds of things,” says Thomas McCabe, national manager of Siel Bleu.

“The WHO guideline for the older population is 150 minutes of exercise a week. If you break that down to 30 minutes five times a week, it becomes achievable.”

McCabe instances the example his grandmother, who lives on her own in Cavan. She is 95 and, he testifies, is “as healthy as a horse”.

“But there is a strong risk for her of that muscle loss which can be hard to regain, and that leads to loss of balance, higher risk of falls, a loss of confidence and then you are straight into a spiral of decline. Ireland has the youngest population in Europe but our population of over-65s will move from 640,000 to a million over the next nine years.”

That programme is one of several community-sponsored ideas associated with ChangeX, which was set up to give voice and funding to social movements such as the Men’s Shed, which can simply and instantly improve the quality of life for its members.

“To my mind, there should be as many Men’s Sheds in Ireland as there are GAA clubs,” says Paul O’Hara, founder of ChangeX. “And we went looking for those good ideas.”

Among its more conspicuous successes are Grow It Forward, which sends out food packs to households interested in growing their own food; the Street Feast movement; and, vitally during the time of indefinite isolation, the forthcoming Age Action Ireland launch to train elderly people in how to use social tools like Facetime or Skype to stay in touch with family and with one another.

“We are trying to build a network of citizens in local communities who will go out and train older people in how to use that video technology,” says O’Hara.

For Anne McGuire, the enforced reappraisal of her lifestyle has made her realise that she might even have been living a bit too socially. The hour of exercise, alone but within a virtual community, has been a revelation.

“I can never be idle. And maybe I wasn’t making enough time for myself. So I might just factor that in now. But the other aspect of this is the fun aspect of it because the instructors chat and talk and joke and when you live alone it is lovely to have that.

“I have told friends about the classes and even yesterday I got a message from one saying the classes are a life-saver. And I am not given to depression but I honestly feel that if I didn’t have this, I would be going up the walls at this stage.”

From Marianne to Claudia Winkleman: The rise of the lockdown fringe
10