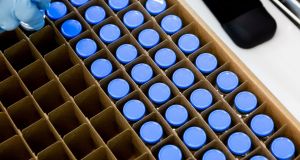 A drug used to treat Ebola patients has shown “very promising” early results in a trial of people admitted to hospital with coronavirus, scientists said.

Patients given remdesivir had a recovery time that was almost a third faster than those given a placebo, the first results from an international clinical trial showed.

Abdel Babiker, professor of epidemiology and medical statistics at UCL, told BBC Radio 4’s Today programme: “These are very encouraging results from the first large-scale randomised trial to report on any treatment of Covid-19.”

He said the group of adults admitted to hospital with advanced coronavirus who received remdesivir recovered “much faster” than the group that received a placebo.

Preliminary results also suggested a survival benefit, with a lower mortality rate of 8 per cent for the group receiving the drug, compared with 11.6 per cent for the placebo group, the National Institute of Allergy and Infectious Diseases (NIAD) said.

More than 1,000 patients have been recruited across the world for the Adaptive Covid-19 Treatment Trial, which began at the start of April.

Scientists involved in the study defined recovery as a patient being well enough to come off oxygen, being discharged from hospital or even returning to normal activity levels.

During the trial, which involved more than 70 hospitals worldwide, patients were given the antiviral drug every day for 10 days while they remained in hospital.

Prof Babiker told the BBC that the preliminary findings would face a “rigorous assessment” from regulators, even if a licensing process was “fast-tracked”.

He said: “It’s the only drug where we have evidence that it helps patients and I’m sure the drug manufacturers are now in discussions with the Food and Drug Administration in the US to speed up the licensing of the drug and I’m sure they will also come to the European Medicines Agency for the same thing.”

A separate, smaller study in the Chinese city where coronavirus was first detected, found the drug did not speed up recovery or reduce deaths in people with Covid-19 compared with placebo in patients admitted to hospital.

That study, published in The Lancet on Wednesday, involved 237 adults from 10 hospitals in Wuhan.

But the authors said that, because the trial was stopped early, the true effectiveness of remdesivir remains unclear.

Profe Bin Cao, from China-Japan Friendship Hospital and Capital Medical University in China, who led the research, said it was not the outcome his team hoped for but recognised they were limited in the patients they could enrol. – PA