Jogging past some shops early on a spring morning, I saw my reflection 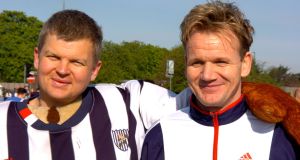 Adrian Chiles and Gordon Ramsay during the 2005 Flora London Marathon at The Mall in London. Photograph: Niki Nikolova/FilmMagic

Joggers are coming in for some stick, what with all their droplets and rule-infringing pavement hogging. I feel no anger towards them, only concern and pity – because there are some gaits from hell out there. Arms flail around, above legs unco-ordinated with them; often the legs barely co-ordinate with each other. They are making it so hard for themselves and will surely get injured. It’s not their fault; it’s unlikely they’ve ever been taught how to run properly.

I got into running when I was about 30. I weighed 18st (114kg), about three stone of which I plainly needed to lose. At the time, there wasn’t a lot of this HIIT fast interval training caper around; it was all about putting in lots of slow, steady miles. As we all keep saying, it is very important to follow the science, so that is what I did: hours and hours plodding streets, parks, river paths, hills, fields and mountains. After each run, again following the science (well, my interpretation of it anyway), I troughed carbohydrate-heavy fare in great quantities. My longest training run lasted six hours. My biggest post-run feed involved an entire wholemeal loaf and bunch of bananas.

My first marathon was in New York. I romped home in several seconds less than five hours. For a week I couldn’t get up or down stairs, or on or off a toilet, without assistance. In all I ran three more marathons, running many hundreds of miles in training, without losing an ounce. In my last race, I beat four hours by all of 17 seconds; if there was an 18 stone-plus category, I may have been well-placed. I only eventually lost weight by running less, and eating a lot less, but that’s another story.

Slow and heavy as I was, I still rather fancied myself as a runner. But then, jogging past some shops early on a spring morning, I saw my reflection. And what a shambles I was, lolloping on, shoulders hunched and head bowed. My posture is terrible at the best of times. On a good day, I resemble the chap in second place on that drawing of the five evolutionary stages of man. On a bad day, I’m the one behind him. While running, I was the one behind that.

There is a lot more to it than this, but I will pass on a couple of tips

I went to see a running coach, Mike Antoniades, who filmed me on a treadmill. The most bizarre thing was my arms. The left one pumped backwards and forwards, while the right arm pumped to and fro across my body.

“Do you carry a shoulder bag much?” he asked.

I called Mike this week and, predictably, he is in despair at what he is seeing out there. There is a lot more to it than this, but I will pass on a couple of tips. First, the arms, which Mike says are important: “Think of them as pistons.” They should be bent at around 90 degrees and should pump back and forth in as straight a line as possible, and never across the middle of the body. Concentrate on thrusting the elbows backwards a good way, and the arms’ forward movement will look after itself. It is similar for the legs: keep them moving in a straight line and make sure that each time a leg goes back, the lower half (the calf bit) of it finishes at least parallel with the ground.

Sadly, my joints are now so knackered from the mega-hours of plodding I put in 20 years ago that I can’t run much these days.

I am still embarrassingly slow, as the grandparent who overtook me pushing a pram yesterday will confirm, but by God, I’m good to look at. Poetry in slow motion. – Guardian

Róisín Ingle: My body has seized up while in lockdown
6