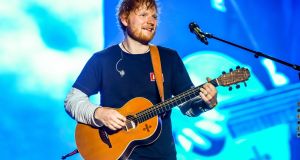 Ed Sheeran has opened up about how he used to binge on junk food until he vomited. File photograph: Luigi Rizzo/Getty Images

There is no amusing or pleasant way to say this: Ed Sheeran used to binge on junk food until he vomited.

In a candid interview with Hay House, a US self-help publisher, the singer talked about struggling with anxiety, addiction and body image problems at the height of his career. Sheeran said he had been reading Elton John’s autobiography and saw a lot of his behaviour reflected in it. “There are so many things that he did that I do. He would be like: ‘I would just go on an ice-cream binge and eat four f**king desserts until I threw up,’ and I was like, ‘I’ve done that before.’”

I have done that before, too: I lost several years of my life to anorexia and bulimia. But that is probably not a huge surprise: women are expected to have a torturous relationship with food. Guys like Sheeran, however? Not so much. Despite the fact that the prevalence of eating disorders in men has been rising rapidly and about 25 per cent of those with eating disorders are male, it is still thought of as a “female” affliction.

This means that male eating disorders are underdiagnosed and overlooked.

John was explicit about his bulimia; to be clear, Sheeran does not call himself bulimic in his Hay House interview or say he had an eating disorder. He talks instead about having an “addictive personality” and being “an all-or-nothing kind of guy”. However, I don’t think it is inappropriate to call his bingeing and vomiting disordered eating. Indeed, I think it is important to call it out; too often when a man has a problematic relationship with food it is glossed over or even glamourised by the media.

Jack Dorsey, the CEO of Twitter, is known to go on occasional water-only fasts. If Dorsey were a woman, I have no doubt that his diet would be heavily analysed and every inch of his body scrutinised; words such as “anorexic” would be thrown around. As it is, Dorsey’s extreme fasting is simply lumped in with the “biohacking” that is all the rage among Silicon Valley tech bros.

The late Steve Jobs is another example of how we mythologise rather than pathologise unhealthy eating in important men. According to his official biography, Jobs would sometimes live on only apples and carrots for weeks and would fast for days on end in an attempt to induce euphoria. That is something I did when I was 15 and it was quite rightly labelled anorexia. Jobs’s dangerous eating habits, on the other hand, were often framed as being part of his idiosyncratic genius. We look at the same behaviour very differently when it is a male executive doing it rather than a teenage girl.

But perhaps that is slowly starting to change.

Sheeran is far from the only male celebrity to have spoken recently about his relationship with body image and food; more and more men are starting to speak candidly about such problems.

Robert Pattinson and Zac Efron have both opened up about the pressures of having to maintain a ripped body. Russell Brand, Christopher Eccleston and Zayn Malik have talked about their eating disorders. Earlier this year, Andrew Flintoff, a former England cricketer and a host of Top Gear, announced he was making a BBC One documentary on his battle with bulimia.

It is hard to overstate how important these voices are. For every man who speaks up and redefines what an eating disorder looks like, there is someone out there who will realise: “I have done that before.”

There is someone out there who will realise that they are not alone and that there is no shame in getting help. – Guardian

What sold for €540k in Donnybrook, Naas, Killiney and Castleknock
8