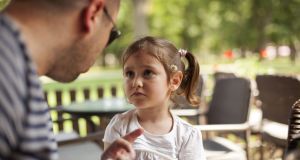 I’ve seen my fair share of parents losing the absolute rag with their kids. And it’s almost always the dad. Photograph: iStock

This happened about a year ago, but I think about it often. It is a mildly upsetting story, so to respect the anonymity of the participants I will change some key details.

We were walking through a well-known Dublin city park that rhymes with Steevum’s Breen. It was a pleasant day, and the park was full of families and tourists enjoying the fine weather.

I was busy concentrating on not letting my child fall into one of the many ornate fountains dotted throughout the park when I heard a man giving out to his son. I couldn’t make out what the dad was saying, but he was laying it on thick, clearly very angry. I did, however, manage to hear the very last thing he said before turning his back and walking away: “You always do this. You’re always so negative.”

The child was, at most, six years old. After that final parting shot, the boy followed sadly behind, head hanging low like a particularly dejected Charlie Brown.

Usually, I would never judge. But I thought it was a cruel thing to say to a child. In that moment the little boy clearly felt terrible, and I’d wager he had no idea why

Usually, I would never judge. Everyone deserves the benefit of the doubt; we all have our off days. Having said that, let me say this: I judged that man swiftly and severely. I thought it was a uniquely cruel thing to say to a child. In that moment the little boy clearly felt terrible, and I’d wager he had no idea why. If so young a child is “always so negative” they need help and encouragement, not public admonishment.

Over the past four years I’ve spent considerable time in parks and playgrounds, and I’ve seen my fair share of parents losing the absolute rag with their kids. And it’s almost always the dad. Are men more prone to fits of irrational rage than women? I couldn’t possibly say. Although, upon opening any history book, you would have to conclude the answer is a resounding yes.

One possibly paper-thin theory is that men simply don’t spend enough time with their children, especially when they’re young. They work during the week, spend an hour or two with the kids before bed, and take them to the playground at the weekend. I know this is a little reductive, and of course it’s not just dads, but it seems to be a common experience. It’s certainly not something to feel guilty about. Problems arise when that very limited “quality time” turns out to be more stressful and difficult than previously imagined.

This is where gentle parenting comes in.

There are those who roll their eyes at the words “gentle parenting”. New-age, hippy-dippy, molly-coddling claptrap, that’s all it is. This reaction boils down to variations of the “In my day we did things this way, and I turned out fine” argument. To those people I would say, just give it a shot. Automatic hostility toward ideas that don’t conform to your own experience is the exact opposite of progress. You don’t have to treat your children the way your parents treated you.

There is no point punishing a young child for 'bad' behaviour. In fact, shouting at a child, or sending them to their room, or taking away their favourite toy just creates confusion and further pain

So what is gentle parenting?

It is a broad approach to raising children that places a strong emphasis on empathy and respect. In other words, understanding what our children are going through, and trying to connect with them on a meaningful level.

In practical terms this means, among other things, there is no point punishing a young child for “bad” behaviour. In fact, shouting at a child, or sending them to their room, or taking away their favourite toy is more often than not counter-productive, and just creates confusion and further pain in the child’s mind. This is because, quite simply, they don’t understand how their actions have consequences until at least the age of four. On top of that, their actions are turbo-fuelled by their emotions until well after the age of four.

Have you seen Pixar’s Inside Out? That’s what it’s like for young children – they experience emotion on a visceral level. If they’re angry, they’re angry. There’s no rationalising or compartmentalising in their little underdeveloped brains. And if they lash out when they’re angry, and you give out to them for it, what are they going to think? They can’t separate the action from the emotion. They’ll grow up thinking it’s not okay to be angry. Or like the little boy in Steevum’s Breen, that it’s “negative” to give voice to your emotions.

This is just one tiny aspect of gentle parenting. You could fill a whole book with the ideas and practical applications associated with it. And, in fact, a lot of people have. If you’ve never thought about parenting “styles” before, or if you’re having a hard time with your kids, head to your local library and pick up a copy of The Gentle Parenting Book by Sarah Ockwell-Smith, to start.

If it all sounds like the sort of laissez-faire, hands-off parenting that gives the “In my day” crowd hernias; it’s not. It requires Herculean levels of patience and consistency. Gentle parenting is not permissive parenting.

There are times you’ll want to throw in the towel and blow a gasket.

The good news is patience can be learned (who knew?), and in the long run the effort is worth it.

The new rules of house viewing: strict appointments, layers of cleaning, no time-wasters
7