Back in the pool: the new rules of swimming

Booking systems and colour-coded armbands are in; saunas and hair dryers are out as eager swimmers’ return to pools 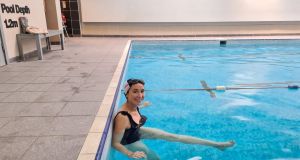 Mary McCarthy at The Dartry Health Club: ‘I love the pool because I can zone out - after five minutes I go into a kind of trance that’s really calming’

I missed swimming so much in lockdown; a bit for fitness, but mainly for its magical effect of processing a grumpy mood into a light one.

Everyone was raving about the sea, but while the endorphins from the cold water shock were welcome, two minutes was enough. And when a friend got bitten by a jellyfish I got wary.

Ben Dunne might want to close his pools but with 6.2 per cent of Irish adults swimming over 30 minutes weekly (according to a ESRI/Swim Ireland report) - there would have been a large cohort like me missing their fix.

I love the pool because I can zone out - after five minutes I go into a kind of trance that’s really calming. I used to go three times a week - around 20 minutes swimming, a nip into the sauna followed by a splash of cold water in the shower - and I never realised, until it was gone, how much this routine enhanced my week.

But now it’s back.

My pool is in a gym, The Dartry Health Club, and while gym users can’t shower, thankfully swimmers can as heading home in wet togs holds little appeal.

You have to book your slot – a generous 75 minutes.

In the changing rooms every second and third locker is closed off to allow for two metres social distancing.

Apart from fewer people and no hair dryers – even the machine that dries the swimsuits was off – it was a lovely return to normality; lowering myself into the water the pandemic felt like a bad dream. Everything was clean and with reduced numbers there was no problem keeping a distance.

Manager Seán Gavin said demand was strong with the booking system going down well with aqua aerobics particularly popular (classes are now halved to 10 places) even though some attending this class are in their 70s and 80s.

Next on his agenda is figuring out where to put the family swims and to sort the kids’ swimming lessons.

I was sad to see the sauna closed and professor emeritus of epidemiology of infectious diseases at University of Nottingham Keith Neal told me this would be low down the reopening list. “Although the heat and dryness of saunas mitigates against risk, the problem is distancing in a very enclosed space with multiple people.”

The HSE has said coronavirus can’t be transmitted in properly chlorinated water and Neal was unequivocal about the impossibility of picking up the virus in the water. “The chlorine in swimming pools kills Covid-19. No ifs, no buts, it kills it. I think the big issue is the changing facilities and showers and maintaining safe distances and clean surfaces.”

Pools could reopen on June 29th and while many did, large numbers of Ireland’s 398 pools (of which 35 per cent are public) will only open this week - with a few waiting later still.

The reason, according to Trish Mayon of Swim Ireland, is that initially pools were aiming towards phase four of the roadmap. “Many of the bigger groups, such as Coral Leisure, which has nine pools around Ireland, were waiting until July 20th – (as per) the initial announcement. The same for Gym Plus in Ashbourne, Drogheda and Newbridge, and Kingfisher in Galway and Waterford. There was just one week’s notice of the earlier date and it was insufficient to get facilities prepared, to bring staff off furlough, and in some cases, re-fill the pools.”

She said 300,000 adults swim weekly so there will be many eager to get back this week, along with the thousands of children who swim regularly.

“We have 160 swimming clubs around Ireland and it’s been a long, tough stretch though it could be worse with the 60 pools in Northern Ireland not allowed open until August 7th,” she said.

Swim Ireland have detailed plans on their website offering advice on how to reconfigure changing rooms and safely give lessons – such as the instructor remaining on deck and not giving out equipment – but says, depending on size, there has been a mix of approaches to opening.

The Swan Centre in Rathmines in Dublin are members only for the moment. There is a one in, one out system with manageable numbers so far for family swims and lane swimming.

Lorcan Beggan is a swimming teacher who has been answering the phones until the lessons start again this week, and says so far there’s been no need for a booking system but he is conscious that non-members are keen to get back.

UCD are also on normal hours with no need to book, though you might need to wait a few minutes at certain times. The lanes have been widened - instead of 10 there are five - with every second shower closed. They are now running the children’s swimming lessons that had been cancelled.

Dublin City Council runs seven pools. Ballyfermot and Markievicz have been open for weeks, with Crumlin and Coolock to open this week or shortly. Another three - Sean McDermott Street, Ballymun and Finglas - are closed for repairs.

The Markievicz is open to all, though non-members need to provide contact details. They are open as per pre-lockdown hours and run a coloured armband system to show what time you got in, with one hour allowed.

Robbie Murtagh says numbers have been steady with all the “hardcores who come at 7am back”.

In Ballyfermot you need to book your 45 minute slot, with the pool open just four days a week with a maximum of 16 people.

Duty manager Amy Heather says the over 60s have been especially keen, with their initial two hour slot increased to four hours. They close the pool to clean after each session, with just half of the 32 cubicles available. “It’s bonkers the demand. The customers missed it, we all did. We’re delighted to see each other. It’s been no issue getting them back in the door. Trying to get them to leave – that’s the problem.”