President signed Bill repealing Eighth into law, but it will be doctors implementing it in a clinical setting 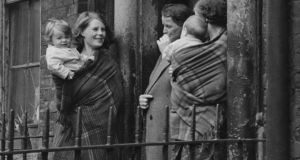 Mothers chatting at the entrance to a tenement building in Dublin, circa 1945. The contraceptive pill arrived in Ireland in 1963, however contraception was not legalised here until 1980 Photograph: Hulton Archive/Getty Images

“How many children have you?” asked
The big Redemptorist.
“Six, Father.”
“The last,
When was it born?”
“Ten months ago.”
“I cannot absolve your mortal sin
Until you conceive again. Go home,
Obey your husband.”
She whimpered:
“But
The doctor warned me…”
Shutter became
Her coffin lid. She twisted her thin hands
And left the box.
The missioner,
Red-bearded saint, had brought hell’s flame
To frighten women on retreat:
Sent on his spiritual errand,
It rolled along the village street
Until Rathfarnham was housing smoke
That sooted the Jesuits in their Castle.
“No pregnancy. You’ll die the next time,”
The Doctor had said.
Her tiredness obeyed
That Saturday night: her husband’s weight
Digging her grave So, in nine months, she
Sank in great agony on a Monday
Her children wept in the Orphanage…

The powerful poem by Irish poet Austin Clarke reflects the long, complex and often tragic history of women’s struggle for control over their reproductive health in Ireland.

This year marks the 50th anniversary of the Irish Institute of Obstetricians and Gynaecologists at the Royal College of Physicians of Ireland and to mark the occasion, the college’s annual St Luke’s Day Symposium will include a special heritage event on Thursday, October 18th, which will reflect on the history of the specialty in Ireland.

2018 also marks the 50th anniversary of the Humanae Vitae, a papal encyclical by Pope Paul VI, which outlined the Catholic Church’s outright ban on all forms of artificial contraception.

According to Prof Mary Daly, emerita professor of modern history at UCD, who is due to address the St Luke’s meeting on “Contraception and the Irish Medical Profession”, the challenges and dilemmas Irish doctors have faced over the last 50 years in caring for women under the constraints of church and State have remained largely hidden and deserve to be recorded.

Dr Michael Solomons, a consultant gynaecologist at the Rotunda Hospital in Dublin, ran one of the first family planning services in the country at Dr Steveens’ Hospital in the early 1960s, under the auspices of a gynaecology clinic.

It is reported that Dr Solomons, on seeing the detrimental impact multiple pregnancies and no access to any form of contraception had on women’s health in Ireland, wrote that, for them, pregnancy was “a death sentence”.

“He didn’t do it in the Rotunda because he claimed that respectable families might not send their daughters to train there if they heard there was a family planning clinic in the place,” Prof Daly said.

The next family planning pioneers in Ireland after Dr Solomons were consultant gynaecologists Dr Kieran O’Driscoll and Dr Declan Meagher who established a clinic in the National Maternity Hospital in Holles Street in Dublin in 1963. “They were really targeting this appalling Irish phenomenon of women who had maybe eight, nine, 10 children, really huge families, generally poor, working class which were more common in Ireland than almost anywhere else at this stage,” Prof Daly explained.

According to Prof Daly, the early family planning services in Ireland which advised women on natural contraception, were extremely important as for the first time it meant that Irish women did not have to accept the inevitability of a pregnancy every year or 18 months. The clinics targeted high-risk women with medical conditions who lived in very poor circumstances with very large families and soon after the other maternity hospitals began to follow their lead.

Prof Daly added that doctors were also instrumental in establishing the Fertility Guidance Company Ltd in 1969, which later became the Irish Family Planning Association. “A lot of the early contraception however inadequate it was in Ireland, is actually medical led.”

The contraceptive pill arrived in Ireland in 1963, however contraception was not legalised here until 1980 with the introduction of the 1979 Health (Family Planning) Act. Under the terms of the legislation, contraceptives could only be used “for the purpose of bona fide, of family planning or for adequate medical reasons” and were only available on prescription.

Under the 1979 Act, condoms were only available on prescription. Some doctors refused to prescribe them on moral or religious grounds, and Prof Daly said some pharmacists also refused to stock condoms, even when it was legal to do so, and this continued up to the mid 1980s.

Prof Daly said that, by the 1970s, there was a certain degree of acceptance that married couples would have to be enabled to have access to contraception. However, it was also widely believed that “the country would fall apart” if it became available to single people.

Sterilisation was another option of birth control that became available in Ireland by the 1970s. However, access to sterilisation was a “very gendered story”. Prof Daly explained that while it was relatively easy for men to get a vasectomy on an outpatient basis in the privacy of a GP’s surgery, it was not quite so easy for women, as tubal ligation required a hospital stay, an anaesthetist and theatre nurses etc. A woman’s husband would have to sign a consent form before she could get a tubal ligation.

Prof Daly said that in the late 1970s, under the direction of the then Archbishop of Dublin, Dermot Ryan, all the Dublin voluntary hospitals established ethics committees, which began to “police” all activities. As a result, she said that by the 1980s it became practically impossible for women to access sterilisation in Dublin.

She added that there are reports of nurses walking out and refusing to assist in a tubal ligation as well as gynaecologists being forced to wheel their own patients to theatre as porters also refused to co-operate on religious or moral grounds.

According to Prof Daly, the introduction of legislation on contraception in Ireland begged the question of who was going to police it, and doctors suddenly found themselves forced into the role of moral gatekeepers for the country.

Fifty years on and while thankfully access to contraception is no longer an issue for most women, doctors continue to find themselves central protagonists in Ireland’s reproductive and sexual health history.

Last month, the President Michael D Higgins signed the legislation that removed the Eighth Amendment to the constitution, allowing unrestricted abortion up to 12 weeks in Ireland for the very first time. However, as the dust settles, and the legislation is bedded down, it will once again fall to doctors to implement it in a clinical setting.

Dr Cliona Murphy, consultant obstetrician and gynaecologist in the Coombe Women and Infants University Hospital and Tallaght University Hospital was recently appointed the first woman chair of the Institute of Obstetricians and Gynaecologists in its 50-year history. Dr Murphy advocated for a Yes vote in the recent campaign to repeal the amendment to the constitution.

For a profession traditionally known to be reasonably conservative, the fact that more than 1,000 doctors lent their voices to the campaign as part of the Together for Yes group, sent a powerful message.

Dr Murphy said, that like a lot of her colleagues, she was reluctant and unsure as to whether or not to get involved in the campaign. “We felt our role was in giving medical evidence, giving the experience that we had seen in our working lives and trying to give a voice for some of those women that would not be strong enough to stand up and give their personal stories,” Dr Murphy said.

Dr Murphy’s priorities for the next three years as chair of the institute include: the implementation of the Maternity Strategy, focusing on the quality and accessibility of gynaecology services and the recruitment and retention of doctors, nurses and midwives across the health sector.

She also said that the recent vote to repeal the amendment required implementation, underpinned by resources and that the institute was committed to playing a key role in its implementation.

On taking up her role as chair, she paid tribute to her predecessor, another strong advocate for women’s health, Dr Peter Boylan, for his “outstanding contribution to women’s health in Ireland and his dedication to the Institute of Obstetricians and Gynaecologists over the past three years”.

Earlier this month, Dr Boylan was appointed by the HSE to assist with its preparations for the implementation of arrangements for the provision of termination of pregnancy in Ireland.

Once again with the implementation of new legislation, society will look to doctors to take the lead.