Do something positive for the disabled in your community 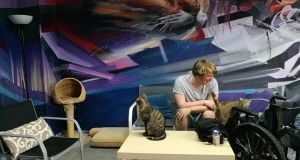 In May, 2018, Ireland held an historic referendum, repealing an anti-abortion amendment to our Constitution. (Full disclosure right out of the gate: I did not personally vote, as I was still more or less bedridden on polling day from an operation. But an extraordinarily fair-minded man, who was planning on abstaining, voted Yes on my behalf.)

Frankly, it seemed to me that disability was discussed more frequently across the Irish media last month than at any other time in my life. And while I am generally in favour of open discussion and visibility of disabled issues, it bears remembering that Down syndrome Ireland made a statement in January asking both sides to “stop exploiting children and adults with Down syndrome to promote their campaign views”.

Disappointingly, the advocacy group was ignored.

But we have to move on from that and assume the intentions of all involved in these campaigns were good. I am sure that a great number of Irish people were concerned about the birth-rate issues raised by the No campaign. I’m concerned myself – I would very much like to live in a country where disabled life is valued as equal to abled life. Although, due to the decisive nature of the Yes campaign’s victory, restrictions on abortion is no longer a viable method of pursuing this equality. Proposals such as Independent TD Michael Collins’ suggested amendments to ban the abortion of foetuses diagnosed with a disability are unworkable and, whether we like it or not, undemocratic.

Besides, trying to bolster disability rights with restrictions on abortion is, to me, like trying to remove a brain tumour with a hammer. You probably won’t succeed, but, even if you do, the cost absurdly outweighs the benefit. It is my strong belief that accessibility (in the deepest sense of the word; meaning barrier-free education, housing, employment, etc; as well as a general public committed against discrimination) will solve these birth-rate issues before they exist.

And here’s where I make a direct appeal to No voters and campaigners, especially those who were introduced to disability issues over the course of the recent campaign. Because there is so much that individuals can do to make Ireland more accessible.

Maybe you work in a school – why can’t you and your colleagues organise a course in ISL (Irish sign language) or Lámh (used by children and some adults) for your students?

Maybe you own a business – are your premises accessible not just to disabled customers, but also to disabled employees?

Maybe you are a television producer – when was the last time you put a sensitive, positive portrayal of someone with a disability on screen?

I would bet my life’s savings that every single person reading this article can do something to make Ireland a better place for people with disabilities.

While writing this article, I was in touch with Peadar Tóibín, one of the most visible TDs who campaigned for a No vote. We discussed an early intervention programme in his constituency for children with Down syndrome – and the 60 per cent funding cut it took at the start of this year. I have to admit, I was impressed at how quickly and decisively Mr Tóibín moved past the issue of abortion and chose to focus on the changes he could try to make in the lives of his disabled constituents.

I’ve been thinking a lot about referendums more generally.

I think, and indeed hope, that my generation of Irish people (I was 18 voting for the first time for marriage equality) will carry with them a sense of cultural and political empowerment. Because it is a very empowering thing, to tick a box on a piece of paper and watch your world change as a result.

And I can also imagine how disempowering losing a campaign like this would feel. But it is a mistake to think that politics only happens on polling day. Yes or no, do we challenge the person shouting racial slurs on the 46A. Yes or no, do we believe the assault allegations made against our favourite celebrity. Yes or no, do we report the teenager we spot shoplifting in New Look.

These, in a way, are all little referendums on what kind of society we want to live in.

Ones where your votes really matter.