The NHS and its Irish staff: 70 years of service 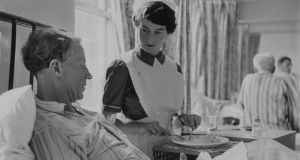 “No society can legitimately call itself civilised if a sick person is denied medical aid because of lack of means,” said Mr Aneurin Bevan, UK minister of health 1945-1951) and chief architect of the National Health Service (NHS).

On July 5th, 1948, the NHS was launched in the UK, with the first public information leaflet stating: “Anyone can use it – men, women and children. There are no age limits, no fees to pay. You can use any part of it, or all of it, as you wish.”

At a time when Ireland has missed several key deadlines for the implementation of universal healthcare in the form of Sláintecare, our nearest neighbours are celebrating seven decades of free healthcare based on clinical need, not the ability to pay.

Over the past 70 years, thousands of Irish healthcare professionals have served the NHS and their personal stories are woven into the fabric of the service. These include Irish nurse Kathleen Connolly (nee Murphy) from Co Mayo, who dedicated her professional career to the NHS. “When I started as a student nurse the consultant used to come on the ward on Christmas day and carve the turkey and we all stood around and served the patients,” says Kathleen. It was a time when consultants were treated like Gods as they carried out daily rounds on spotless wards, and every drug cabinet was equipped with a bottle of brandy to help a restless patient sleep or soothe a grieving relative.

Kathleen was one of those who shared memories with The NHS at 70 – The Story Of Our Lives, a project that aims to capture the social history of the NHS through real-life stories.

Dr Stephanie Snow, medical historian at the University of Manchester, is the director of the project and she explained that it aimed to capture the heritage of the NHS, which since 1948 has been interwoven in the lives of everyone in the UK. “It has been part of our lives from birth through work, illness, communities, death, across the UK and it seemed a really interesting way of, first of all, understanding what meaning and value the NHS has to people and also how we have experienced change over time across society as well. So, for example, the role of religion in healthcare, the way diet has changed, the difference of the diseases and the spectrum and the way that has changed over the time.”

The project is currently based in Greater Manchester and South Wales with 12 volunteers in each area working to collect stories from patients, staff and anyone with a tale to tell about their experiences of the NHS. The aim is to roll out the project to other parts of the UK later this year, including Northern Ireland.

Among the many Irish-trained healthcare professionals who made a real and significant contribution to the NHS include the late Prof Anthony Clare, consultant psychiatrist, and the late Prof Aidan Halligan, who turned down the chance to become the first head of the HSE and rose to a very senior level within the NHS.

Mr Kieran Ryan, managing director of surgical affairs at the Royal College of Surgeons in Ireland (RCSI) outlined some of the Irish-trained surgeons who have made an extraordinary contribution the British health service. “Among the most renowned is paediatric surgeon Prof Edward Kiely, who led the successful separation surgery procedure of the Benhaffaf twins, Hassan and Hussein, from Co Cork, at Great Ormond Street Hospital for Children in London.”

Prof Anthony McCarthy, consultant perinatal psychiatrist at the National Maternity Hospital in Dublin, spent almost a decade in the UK, where he worked as a consultant psychiatrist and clinical director for adult mental health at Guy’s Hospital in London. When he left to work in the NHS in the 1980s there were just two higher training posts in psychiatry in Ireland therefore “the invitation to work at Guy’s Hospital in London was impossible to turn down”.

Despite the many opportunities, Prof McCarthy acknowledged that the move to the UK was not without its drawbacks. “Moving to the UK was very demanding on my family and financially came at a very significant cost. Sometimes, the standard of clinical practice was significantly deficient compared to some of my training opportunities in Ireland.”

Like many Irish-trained doctors Prof McCarthy said he always hoped to return to Ireland eventually but only if the right position came up. He said doctors should always establish what specialty they wished to work in and see if there are opportunities to train and work in that area here in Ireland. “If so, and if it is of the right standard, stay here. If not, go, because the most important issues always is that you are working in the area of medicine that you most enjoy.”

Dr Anthony O’ Connor, consultant gastroenterologist at Tallaght University Hospital in Dublin qualified in medicine in UCC in 2004 and worked in Leeds, England from June, 2014 to October, 2016. Working in the NHS served to improve his skills as a doctor and also taught him about the importance of value for money in healthcare. “I encountered a great level of specialist care. I also got a great appreciation for the costs of healthcare and that every pound spent one place cannot be spent in another. Value for money is embedded in the DNA of the NHS. It can be frustrating at times, but, when you get used to it, it is educational.”

He said the main benefits of working in the NHS were “the joy of booking a test or procedure for a patient and knowing it is going to be done usually in a few weeks”, which he added could “never be underestimated”.

The drawbacks were that the system in the UK could be “a bit dictatorial from the top down,” he said. “You lose some autonomy, but what you lose there you gain in being able to promptly access tests and treatments for your patients.”

He said he believed Irish staff had made an invaluable contribution to the NHS and added it would be “a great tragedy of Brexit if it doesn’t continue”.

The threat of Brexit looms large over both the UK and Irish healthcare landscape. According to the latest figures from the General Medical Council (GMC) in the UK, at the end of December 2017 there were 3,216 doctors who graduated from an Irish medical school registered and licensed with the GMC. (A registered and licensed doctor may practise in the UK but this does not mean that all 3,216 are currently practising).

Prof Anthony Staines, professor of health systems, School of Nursing and Human Sciences, DCU said he thought Brexit was unlikely to make it more difficult for Irish-trained staff to work in the UK as the rights of Irish citizens to travel, live and work in the UK preceded the EU and have been in place since 1923. However he said there was work to be done to ensure that the UK continues to recognise Irish qualifications.

“At present neither the UK nor Ireland train enough healthcare staff, especially nurses, for their own needs,” said Prof Staines. “Both rely heavily on importing staff. However, EU staff are unlikely to choose the UK after Brexit, and indeed numbers are dropping now. There is a real risk of a loss of Irish staff to the UK post-Brexit. In any event, the NHS staffing crisis will get much worse, and the Irish crisis may get worse too.”

Prof Staines said that in the 1940s the UK “took a different path” to Ireland and developed “one of the best healthcare systems on earth, at a very low cost”.

“By contrast, we have failed repeatedly to grasp the nettles of Irish healthcare, and we have one of the most expensive services in Europe, and it is far from world class. We could learn that from the NHS. The NHS has offered wider horizons, and better opportunities for generations of talented Irish healthcare staff. Maybe we need to reflect on why it is so much more attractive then our service?”