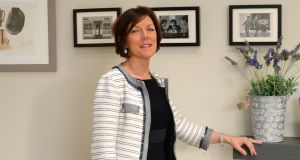 Dr Íde Delargy: “When doctors resort to self-management with alcohol or prescription drugs, the risk of suicide is higher.” Photograph: Cyril Byrne

Support rather than report is the ethos of the free confidential counselling for doctors, dentists and pharmacists available through the Practitioner Health Matters Programme run by Dr Íde Delargy.

The programme, which was set up in September 2015, has seen a steady increase in the numbers of health professionals – mainly doctors – seeking help for stress, burnout, depression, anxiety and misuse of drugs/alcohol in the last three years.

“We are seeing quite a lot of young trainees and recently qualified doctors, particularly women, suffering from stress, burnout, anxiety and depression,” says Dr Delargy. The introduction of graduate-entry medicine programmes into Irish universities has, according to Dr Delargy, given some people with other careers unrealistic expectations of what working as a doctor is like.

She describes stress, burnout, anxiety and depression as preliminary problems to alcohol and drug addictions. “When doctors resort to self-management with alcohol or prescription drugs, the risk of suicide is higher and doctors are more likely to complete a suicide because they have the ways, means and knowledge to do so,” she says.

International studies suggest that more than 10 per cent of healthcare professionals will experience problems with alcohol or drugs. Excessive drinking of alcohol is often part of the culture in medical school and because doctors have access to medicines, they are more likely to misuse prescription rather than illicit drugs.

Dr Delargy says working in healthcare has become more intense and complex in Ireland. “There is no slack in the system now because the recruitment and retention of doctors is difficult. The fear of failure is greater because mistakes result in inquiries, and hearings at the Medical Council are now held in public.”

Some doctors continue to suffer psychologically even if complaints against them are not upheld. “People think that doctors just walk away when something goes wrong. But they can get extremely upset. Some doctors suffer from post-traumatic stress disorder or what’s called second victim syndrome after a series of adverse events. Yet there is not a lot of sympathy for doctors, who are seen as well-trained fat cats who should be able to suck it up,” she says.

Dr Delargy says the workplace needs to be more accommodating to young trainees and recently qualified doctors. “Some are struggling and tell me that they have no one to turn to. They are mistrustful of contacting people in their workplace or training body for fear of displaying their vulnerability. It’s a competitive environment and the culture of bullying and harassment still exists, even with more women working in the profession,” she says.

She also suggests the public needs to be more understanding of the pressures doctors are under in the Irish healthcare system. “The public has become more demanding and doctors are expected to be on full alert. There is a constant bashing of doctors now, which results in lower morale. Doctors are not robots. They can have relationship issues, a sick child or a family bereavement just like anyone else. They are resilient after all their training and exams but something else in their lives can diminish or deplete them.”

Long hours and few opportunities to have breaks and eat nutritious food also play a role in stress and burnout. “Many doctors still work very long hours – in spite of the European Working Time Directive. Many don’t have time for lunch and sometimes hardly have time for a bathroom break,” she says. The European Working Time Directive stipulates that non-consultant hospital doctors (registrars) work no more than 24 hours on site on call and no more than 48 hours per week, with a 15-minute break for every 4½ hours worked or a 30-minute break for every six hours worked.

Dr Delargy says there is a lot of unpredictability in some specialities, which means it’s impossible to guarantee that staff will get their breaks. “Some doctors cope better with this than others. It is very important to have good sleep, time to eat nutritious food and reasonable levels of exercise. The more these three things slip, the less well you’ll feel. We’re not mindful enough of the working conditions of doctors,” she says. One of the first recommendations she makes to doctors who come to see her is to switch off their social media accounts and take some time out.

The Practitioner Health Matters Programme is funded by the HSE and professional health organisations yet separate from professional regulatory bodies such as the Medical Council, the Dental Council and the Pharmaceutical Society of Ireland.

Dr Delargy sees this independence as hugely important so that health professionals in need of support will trust the service. “Shame, guilt, stigma, fears around confidentially and fears of their future ability to practise if their difficulties become known prevent many doctors from seeking help early,” says Dr Delargy.

Delaying seeking treatment for a drugs/alcohol misuse or mental-health problem means that often when health professionals do eventually look for help, their problems are more severe. “Doctors can find it difficult to go to another GP colleague for help – especially in rural parts of the country,” she adds.

International studies show recovery rates are good once doctors engage with programmes such as the Practitioner Health Matters Programme. “The vast majority of doctors go back to work safe and well. They have good insight and with the right help can tackle their problems and get well,” she says.

Dr Delargy is, however, concerned that many doctors, dentists and pharmacists still don’t know the programme exists. “All the professional bodies endorse it but I’d like to see it promoted better and put on the home page of their websites. Families of doctors need to know about it too. We know that there are more doctors out there who need help and aren’t seeking it.”