Tell Me About It: ‘I thought we were close despite the geographic distance between us’ 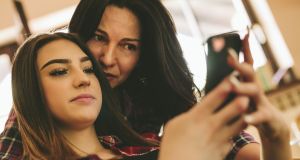 “My husband feels embarrassed and ashamed about the way he behaved, but he is mostly sad that she didn’t feel that she could confide in us before.” Photograph: iStock

Question: Our only child, a daughter who is 26, has lived abroad for the past five years. We have always been in almost daily contact, mostly by social media or text, but also often by phone.

During the summer we took a long-haul flight to visit her for the first time in her new home. We were very excited to see her as it had been two years since we got to spend time with her. Even though it was in the mid-morning when we arrived and we were jet lagged we went for lunch in an airport restaurant. None of us are big drinkers but we shared more than one bottle of wine to celebrate our reunion.

Just as the lunch was coming to an end, our daughter announced that she was in a relationship with a woman and that we would meet her partner of one year when we arrived at her apartment. I never suspected that she was gay or bisexual as she had a number of boyfriends throughout her teens. I always thought that both I and my husband were opened minded and we both have a number of gay friends, whom we are very close with. I immediately gave her a hug and had a little cry but that was probably just a combination of jet lag, alcohol and emotion. I was a little disappointed that she hadn’t told us before, as she is the most important person in our life and I always thought we were very close despite the geographic distance between us.

My husband who is a fine man, but has never been known for his eloquence got very annoyed and became somewhat insulting not about her sexuality but the way in which she came out. In turn she started to argue with him and we ended up staying in a hotel for the entirety of our holiday, which was not the plan. She did visit us but it was very awkward and she never brought her partner. My husband feels embarrassed and ashamed about the way he behaved, but he is mostly sad that she didn’t feel that she could confide in us before.

I am not angry with him, as even though it was not his greatest moment, I don’t think the circumstances were right for what should have been a very special memory. Our daughter remains in contact with us both, but just not as often and the communications are not as warm as before. My husband is distraught and wants to make everything okay. He is very keen that we book another trip to see her after Christmas. I am not sure, we cannot really afford it as the last holiday was a lot more expensive than we had planned.

I also think that it might be a bit forced and if it doesn’t work out it could destroy our family.

Answer: This is a situation where everyone is suffering huge pain at the loss of what appears previously to have been an almost prefect relationship between parents and child. If you were living in the same country, family therapy or family mediation would be ideal to help you all negotiate this difficult emotional field as the rawness experienced by all of you is making communication difficult. However, communication is needed and it is needed urgently as the hurt seems to be increasing as the time elapses.

As your daughter feels the most wronged, she should be the one to set the terms of the communication and I wonder if you can ask how, and under what circumstances, she might be able to re-engage with her father. It seems that her relationship with you is less torn so she may be able to discuss this with you. The aim of the process is to establish the steps that might allow her to introduce her partner to you both so you can include her relationship in your connection with her. I know that it is very expensive to travel to where your daughter is but this may be the kind of grand gesture she needs to believe in your good intentions.

The fear that the relationships will become more damaged is one to challenge as you are being guided by love and genuine affection and a willingness to bear whatever is needed to repair the relationship. It is likely that your daughter will need to see evidence that your husband is honest in his sorrow and perhaps if she can accept this, she may be able to hear his hurt at being excluded from knowledge of her relationship and sexuality for such a long time. This is going to take many conversations and engagements and you may have to have a long-term perspective as pretend-fixing will not suffice for anyone.

Trust takes effort and evidence to grow and all of you are suffering from the loss of what was beautiful and untarnished. There is no returning to what was but all of you can develop a more adult and honest relationship and there is a real opportunity in front of you now. If you fear that your husband will blunder into saying something he will later regret, he may benefit from developing his self-awareness through counselling and your daughter may see this as confirmation of his sincerity to heal the relationship.

In any case, the time for action is now and do not let the opportunity pass as all of you will grow even more hurt and resentment.