Get your arse in gear: the fitness obsession with bottoms 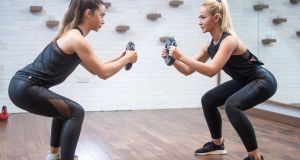 The hottest gym in LA right now is Bünda: Portuguese slang for bum, the “home of the better butt” – a gym entirely dedicated to working your posterior.

It promises a “total body change”: “Once you Bünda, you will never look back . . . well, maybe for a selfie.”

The trend has hit gyms on this side of the Atlantic too, with a number now offering a range of classes focused only on glutes, from “BadAss” to the “Kylie Butt Lift” – named after Minogue, not Jenner. But it is the rise and rise of Jenner and the Kardashian family, whose bottoms have grown with their bank balances, that has led to a seismic shift in workout culture.

While many women have, of course, always taken pride in well developed glutes, the emphasis on a firm, or “juicy”, bottom has now overtaken the flat stomach as the fitness holy grail in mainstream women’s health magazines.

Instagram is the biggest platform for the trend, with #squats having reached 16.3 million mentions and #glutes 4.6 million as fitness influencers such as Tammy Hembrow and Katya Elise Henry profit from millions of followers wanting to know how to achieve their own butt transformations.

With the Kardashians’ big bums and tiny waists the beauty benchmark for many young women, despite their multiple rumoured surgical enhancements, fitness trainers are finding that their clients increasingly approach them with unrealistic demands.

These people manage to have humungous backsides, but their thighs, hamstrings and calf muscles are non-existent

“People bring me a photo of the bum they want, and I have to say: ‘Okay, let me talk you through the picture’,” says personal trainer Kelechi Okafor. “They did not do this from training. These people manage to have humungous backsides, but their thighs, hamstrings and calf muscles are non-existent. I’m having to take a step back from taking on so many clients because it is so draining dealing with people’s expectations.”

Some fitness experts say the trend is not just about aesthetics, and endorse glute-activation warm-ups as the best way to start a workout and get the body firing on all cylinders. Pilates trainer Hollie Grant says any form of glute activation helps people to bring their pelvis back to a more neutral position.

“Most people have lazy glutes because, when they are sitting down, it lengthens and stretches the glute muscle. That has the effect of switching it off.”

Grant enthuses about the benefits of strong glutes in preventing knee injuries and back problems, and also for postnatal women whose gluteal muscles have lengthened during pregnancy as a result of the relaxin hormone. “Plus, when your glutes are firing, you’re quicker at running and more powerful at doing squats and deadlifts.”

Jim Pate, head physiotherapist at the Centre for Health and Human Performance in London, agrees that getting our glutes active is positive. “Glute exercises such as squats, deadlifts and lunges are good because they are compound – meaning they use many muscle groups, including the core.”

But both Grant and Pate warn that the idea of “spot training” to isolate and train just one part of the body is a fallacy. “Over-focusing on one muscle group is going to mean that other areas are neglected and will remain undeveloped or, worse, will deteriorate if neglected over time,” says Pate. “Imbalances in different muscle groups’ strengths that are used together can result in poor functional performance or injury. An all-round programme will result in better, more sustainable results than passing fads.”

With all the focus on women’s bottoms, there is a small group of health professionals hoping for a positive impact on the less visible muscles in and around our glutes: the pelvic floor. Amal Hassan, a sports and exercise medicine doctor, is one of the founding members of the Pelvic Floor Patrol, which aims to improve health services for women with pelvic floor dysfunction. “Your glutes support your pelvic floor,” she says. “So if you’re at risk of pelvic floor dysfunction and you’re not firing your glutes in functional movements – so sitting to stand, going upstairs – those deep pelvic muscles can become tight and cause pelvic pain, pain on sex, or propagate symptoms of incontinence or prolapse through weakness.”

Even so, glute activation can be difficult to achieve, and Hassan advises using a resistance band to pinpoint the correct muscles. Additionally, she says, postnatal women should first prime the pelvic floor – by exhaling and lifting the muscles – before attempting loaded glute work such as weighted squatting, deadlifting, or even standing in the saddle at a spin class. Untucking the bottom can also help with posture.

Despite the many functional benefits of stronger glute muscles, Grant says she still feels sceptical about focusing so heavily on a single part of the body. “If (this trend) gets people using and thinking about their glutes, fine, as long as we don’t become obsessed with it as a body part and instead think about function. My issue with this is that, yet again, we’re putting one body part on a pedestal. You can change the endurance of a muscle, and you can improve the function of them but I’ve never been a massive believer that you can grow a big juicy bum. I think it’s misleading to suggest you can dramatically change.”

Okafor is dismissive of the idea this is a “body positive” movement just because it allows for a few curves. “We’re told this trend is progressive and inclusive, but body shaming and fat shaming is still going on. It’s not as if now that bigger bums are in we’re embracing everybody. It’s only a particular aesthetic that’s acceptable. What is progressive about that? We’re just creating real-life Barbie dolls.”

Many black fitness professionals are angered by the fitness industry’s new interest in larger bottoms that has led to, for instance, tennis star Serena Williams – her body a product of her sporting talent and discipline – grossly caricatured, while the same attributes in white women are considered desirable. “Remember when Caroline Wozniacki stuck towels down her skirt making fun of Serena?” says Okafor. “When it’s on a black woman it’s something we all laugh at – ‘look at this barbaric woman with her big bum’ – but a non-black woman with the same body is profitable.”

Chrissy King, a personal trainer and powerlifter based in Milwaukee, who blogs about intersectional fitness, says “It’s the profitability of this cultural appropriation that is the burn. White women have been able to take something that black women have always had, popularise it and make money from it when black women can’t.”

So should we rush out and join an ass class?

The fitness professionals agree that strong gluteals are important for a well-functioning body. But as King asks her clients: “Do you want a bigger butt because, societally, you think this will make you feel more accepted? To me, this just feels like another example of fitness capitalising on women’s insecurities about their bodies.”

Like Okafor, King is battling the way society pressures women to exercise to look a certain way, rather than focusing on fitness and strength for health and functionality. She despairs of the approach of many personal trainers and fitness influencers on social media. “I see the same things all the time – fitness videos filmed at an angle that shows their butt from behind.”

She laughs. “Personally, I film my squatting videos for technique. No one would ever judge a squat technique from behind.” – Guardian

The Irish ice-cream maker who was diagnosed with diabetes
10