Childcare: ‘You try and do your best and you feel attacked all the time’ 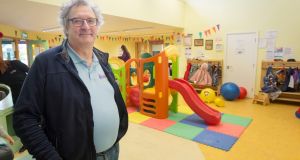 Steve Goode, manager of two childcare centres in Limerick. His centres have already had to cope with the loss of about €40,000 of State funding after being found ‘non-compliant’ over attendances. Photograph: Liam Burke/Press 22

Two childcare centres in Limerick city that serve one of the most disadvantaged areas of the State are already “running right at the edge”, says their manager Steve Goode. “Under the current schemes we barely survive.”

But he fears the National Childcare Scheme (NCS) will adversely affect the community they serve, with knock-on effects for sustainability of the centres – in Ballynanty and King’s Island – which are run by the Northside Family Resource Centre, covering an area from Moyross to St Mary’s Park.

Nearly all the centres’ children are on targeted, subsidised schemes for full- or part-time places. The current families can continue on those but incoming children can only be registered for the NCS, which is likely to be less favourable for them because of their circumstances.

The area topped the country’s list of unemployment blackspots based on the 2016 census, with rates of 54 per cent in the King’s Island area and 44 per cent in Ballynanty. Often one parent is working and one not, Goode explains, and it tends to be the mother who has a job. Those are the sort of households for whom the NCS is not good news.

His two centres have already had to cope with the loss of about €40,000 of State funding after being found “non-compliant” over attendances because families were not using all the hours they were enrolled for. Inspectors from Pobal have been conducting what providers describe as “forensic” audits after rules were tightened.

The rigidity doesn’t seem to allow for the myriad reasons a child may miss days or be late coming in or early leaving. In Goode’s experience, these range from settling-in periods, sickness and traffic congestion to parents getting days off work, grandparents wanting time with grandchildren and sometimes chaotic home lives.

Childcare providers point out that they can only operate budgets around enrolments and their running costs are the same, regardless of whether or not every child turns up for every hour allotted.

Having been asked by Pobal in one audit to re-register more than 50 children for reduced hours, on the basis of their attendance in a test window, the Northside Family Resource Centre appealed that decision, giving reasons for the apparent discrepancies in every case and only conceding that five should have registrations amended.

In making the argument for maintaining hours, it explained the extenuating circumstances around two families in particular. In a reply, seen by The Irish Times, rejecting the appeal, a Pobal official writes: “The Department of Children and Youth Affairs and Pobal have fully considered your request for a review of the compliance findings due to the family and child’s individual circumstances and while we fully appreciate the difficulties you outlined, unfortunately there is not the latitude in the scheme rules to apply discretion in this instance.” Goode says: “We were very shocked when we got it because it was the Department of Children saying rules are rules and they’re not taking individual needs of children into account.”

“Non compliance” has been the death knell for one Dublin inner-city, school-age care service providing breakfast and an after-school hot meal for up to 30 children during term time, and projects during the holidays. The Donore Education Network, operating in the former St Teresa’s Gardens on €61,000 funding from the Department of Children and Youth Affairs, has decided to close on December 31st with the loss of five part-time jobs. It came within a day of closing in March after being told all funding would be cut, but then came to an interim arrangement.

Patricia Condron, who is retiring as the co-ordinator, acknowledges the service was “majorly non-compliant” for not logging children’s time, but believes the system is “not fit for purpose” for an out-of-school project like theirs, where children “pop in and pop out”.

“We are trying to assist children who are from really disadvantaged homes, sometimes just to get a hot meal. We are not trying to give them childcare for a mother who is working – most of our mothers aren’t working – but the children do need to be in some sort of community setting.”

There is no understanding, she adds, of how operating a service in chronically disadvantaged areas is just not compatible with the “rules”.

Ironically, the NCS will herald a relaxation of rules around attendance. Minister for Children and Youth Affairs Katherine Zappone has said that these “will seek to reflect the reality of children and parents’ lives and the need for services to operate as businesses”, while “honouring the requirement to ensure that exchequer funding is used for the purposes it was intended”.

In light of these impending changes, Marian Quinn, chair of the Association for Childhood Professionals (ACP), says it is “unbelievable” that they were continuing to “penalise the centres, which ultimately penalises the children”.

Goode sums up the frustration of being a community childcare provider in a disadvantaged area: “You try and do your best and you feel attacked all the time.” It would be very easy to fill their centres, he adds, with children from all over Limerick, because there is such a shortage of childcare places, “but we wouldn’t be serving our community”.

Pobal looked to take €40,000 in funding from the childcare service at the St Andrew’s Resource Centre on Pearse Street, Dublin, over non-compliance, but “we fought it”, says childcare manager Martina McKenna. The service, which has 40 children aged two to three, explained that many of the reduced hours were due to settling-in periods, and the cut was lowered to €4,000, “otherwise we would have closed”.

However, it did have to restructure “almost overnight” last February, cutting its hours to 8.30am-3.30pm, instead of being available to 5.45pm, and also asking all community scheme-subsidised families to take full-time places (five hours plus), for which they then needed to pay €30 a week. (The unsubsidised fee is €175 a week.)

The “biggie for us”, adds McKenna, is that new families joining now only have the option of the NCS.