‘Some medical notions, thought to be folklore, actually do have a scientific basis’ 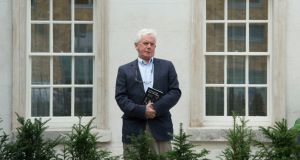 Do teething and fever go hand in hand? Can classical music raise your IQ? Were vampires really just sick people?

These are just some of the questions that have intrigued paediatrician Dr Michael Hefferon, during a career-long interest in medical myths.

The beliefs of both patients, and doctors, are often at odds with medical evidence, explains Hefferon, and modern research is now proving, and disproving, beliefs that have existed for generations. “Myths are widely held but false notions. But some medical notions, thought to be folklore, actually do have a scientific basis.”

Hefferon, who grew up in Rathmines, Dublin, studied medicine at UCD. He became one of the many Irish doctors who emigrated to Canada in the 1980s, when the expansion of its free health system – and a shortage of medics – coincided with a moratorium on the recruitment of hospital consultants at home. Consequently, he says, there is an Irish doctor in most towns across Canada.

'The concept of a vampire... Like many myths is based partly in fact'

He and his wife Catherine, a Montessori teacher, eventually took their family to Kingston, Ontario, where he remains a consultant paediatrician, and an assistant professor in Paediatrics and Oncology at Queen’s University.

Hefferon’s interest in medical history and myths began in college. “All of us who trained in Dublin were imbued in stories, against the backdrop of renowned Irish doctors like Corrigan, Stokes, Collis, and St John Gogarty.”

In his new home, he quickly realised that like the Irish, French-Canadians were steeped in folklore, and often loyal to old remedies.

At the university he introduced Continuing Medical Education seminars on Paediatric Myths and Old Wives’ Tales for doctors and nurse practitioners, examining evidence versus beliefs for common health topics. “I started asking questions like: “Does teething really cause fever?”; “Does eating chocolate and not washing cause Acne?” The short answers: “Teething may cause low grade temperature elevation, but not fever spikes; Acne is mainly caused by testosterone imbalance.”

His interest culminated in a book, Of Plagues and Vampires: Believable Myths and Unbelievable Facts from Medical Practice, published in 2017. In it he awards “the prize for the best example of myth entangled with medicine” to Bram Stoker.

“The concept of a vampire appeared in Balkan folklore, predating his Count Dracula. Like many myths, it is based partly in fact,”explains Hefferon. “They were most likely people suffering from a genetic blood disorder called porphyria - prevalent among the nobility and royalty of Eastern Europe, due to inbreeding.”

Porphyria is a malfunction in the production of haemoglobin, which carries oxygen from the lungs to the body tissues. “Consider the symptoms: Sensitivity to sunlight; Fangs - repeated attacks of the disease result in gums receding, exposing the teeth; Blood drinking - Because the urine of patients with porphyria is dark red, folklore surmised that they were drinking blood. In fact, some physicians recommended that patients drink animal blood; Aversion to garlic. The sulphur content of garlic could lead to an attack of porphyria, leading to very acute pain.”

However, just as previous generations may have believed that porphyria patients were vampires, beliefs remain central to medicine. Even doctors hold dubious beliefs, says Hefferon. “If you trained in the 1970s about half of what you’re going on is based on whatever was believed at the time.”

A sizeable industry, he notes, has built up around the concept that listening to Mozart raises IQ

An openness to changing medical beliefs can have an instant impact. Hefferon cites how the “back to sleep” advice for infants has brought about a massive decrease in the incidence of cot deaths. “We used to admit these poor kids’ siblings and do heart and breathing tracings on them – and then put them back on their tummies to sleep.”

While medical students today are far more scientifically trained than his own generation, Hefferon says some may still hesitate if asked if it is true that women have an extra rib compared to men. “It isn’t true, but somehow, our brains will jumble what we learn in medical training with what we’ve heard early in life. Their upbringing is central to what people believe.”

Having worked in paediatrics for three decades, one of the first questions he now asks parents is what they believe about their child’s condition. “What’s very common is parents believing that they have done something wrong. That’s often because someone has said to them, ‘You didn’t wrap them up warm enough up to six months. That’s why he’s shaking’. Or, maybe they had a couple of glasses of wine while pregnant and think this is the reason their baby isn’t sitting up.”

It is hard to blame people, adds Hefferon, for adhering to traditional folk remedies that appear to work - “if we wait long enough. Even as nineteenth century medics bled, and leeched, and purged people, some were cured.”

One belief from folklore, however, that now has scientific backing, is that cranberry juice can help prevent urinary infections; “though nobody has figured out yet how much cranberry you need to take, and in what concentration.”

So does he follow only evidence-based prescriptions and practices? “I’m very open minded. I don’t think there’s any red-line in medicine, particularly in paediatrics. Every day you come across something that changes your mind. Take for example the idea of giving Calpol before you give shots to infants, to blunt any reaction. The scientific evidence says no to pre-dosing, but because I grew up with idea that you did, I do think that infants are more comfortable with pre-dosing.

“You can have a good outcome, but have a miserable time when you’re recovering. And having a comfortable time during recovery doesn’t tend to come into scientific research.”

A sizeable industry, he notes, has built up around the concept that listening to Mozart – even in the womb – raises IQ. This is based on a group of 36 students who listened to a Mozart sonata, and scored slightly better in spatial reasoning. And though further studies declared the phenomenon non-existent, the belief is still prevalent.

Hefferon is currently talking to publishers about a second book: “Medical myths – A sceptic’s Journey”, which will pose questions including: “Does a caul prevent drowning?”; and “Is it a myth that doctors have bad handwriting?”. Spoiler, it isn’t! He will also discuss some “disappearing diagnoses”, and revisit Mozart, this time to find evidence that his music really does help people relax, and lowers blood pressure.

What sold for €310k and less in Blackrock, Clonsilla, Bray and Co Meath
3

I am a victim of emotional abuse ... it felt like my husband had died
6

What are your funeral options if you don’t believe in God?
8