Are burgers your poison? 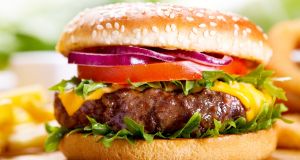 Many of us associate food poisoning with eating shellfish in dodgy restaurants in foreign holiday resorts or eating undercooked chicken or pork at a summer BBQ, but a recent survey by safefood has shown that the new trend for eating gourmet beef burgers less than well done is putting people at risk of food poisoning.

The growing trend of serving burgers less than well done in restaurants across Ireland has raised concerns for the regulatory authorities, including the Food Safety Authority of Ireland (FSAI) and the HSE’s Environmental Health Service.   An online survey by safefood, the all-Ireland food safety board, found that more than 50 per cent of adults admitted they eat undercooked burgers when in restaurants.

Earlier in 2017, the FSAI issued new advice to caterers to only serve beef burgers that are fully cooked.   “A burger is not like a steak which is often eaten medium or medium rare, so we are reminding people that the safest way to enjoy burgers is to always ask for your burger to be well-cooked,” adds Dr Kearney.

However, undercooked beef is not the only cause of food poisoning and often it’s hard to know exactly what has caused food poisoning.   Dr Lisa O’Connor, chief specialist in biological safety at the Food Safety Authority of Ireland (FSAI), says often people blame the last meal they ate or the last meal they ate out, but 50 per cent of outbreaks reported by the European Food Safety Authority happen in the household and 50 per cent happen at catering or restaurant level.

Although she says it’s a good idea to contact a restaurant if a few people have suspected food poisoning after having the same dish, Dr O’Connor cautions people against self-diagnosing.  “Unless you have evidence that the source was food, you can’t be sure.  You can have many of the same symptoms through direct contact with infected animals or contaminated water. Only a doctor can confirm food poisoning with a stool sample,” she explains.

There is little you can do to stop food poisoning once you have eaten contaminated food.   Rehydration is key to recovery so drinking plenty of fluids – water, apple juice, broth or an isotonic energy drink with electrolytes. Fortunately, most forms of food poisoning (see panel) last between one and three days.  However, some forms such as listeria can be fatal.  For this reason, food safety experts recommend four simple rules to prevent food poisoning.

The first rule is to always wash your hands before and after handling and eating food, after going to the toilet or playing with pets or animals.   The second rule is make sure that food is thoroughly cooked so as to destroy any harmful bacteria that might be present.  The third rule is to keep food cool and make sure that your fridge is at five degrees centigrade or lower.  And, finally, separate raw and cooked foods during storage and never let raw meat come in contact with food that is ready to eat.

Camplobacter is the most common bacterial cause of food poisoning.  It is mainly spread through consumption of undercooked chicken or pork, contaminated water, unpasteurised milk or direct contact with infected domestic or farm animals.  Following an incubation period of 3-5 days, symptoms will include abdominal pain, diarrhoea (often bloody) with nausea and fever.  There is usually no vomiting and diarrhoea may continue for up to 10 days.

E.coli 0157 is one of a large group of bacteria called Escherichia coli (E.coli for short). It is a harmless germ in cattle but can cause serious disease in humans. It is spread through the faeces of animals.  Any meat, vegetables, milk or water that has been contaminated by animal faeces can contain E.coli 0157.  The symptoms of E. coli food poisoning are abdominal pain, cramps, nausea, vomiting and diarrhoea with blood.   Usually, there isn’t a fever.  Most people recover without antibiotics or other specific treatment in 5-10 days.

Listeria monocytogenes is a bacteria that causes mild flu-like symptoms, however it can cause severe illness for pregnant women, unborn babies, new babies and people who have serious illnesses already.  Listeria can live in meat, milk, butter, cream, yogurt and vegetables.   The four simple rules to prevent food poisoning (see main article) are particularly important to avoid listeria.

Salmonella is a bacterium found on raw meats, poultry, eggs and in unpasteurised milk. It can be transferred from raw to cooked food by hand or contact with kitchen surfaces and equipment.  The symptoms of salmonella food poisoning are diarrhoea, cramps, vomiting and fever.  The time between contact and illness (ie the incubation period) is usually between 12 and 36 hours.  A stool sample is needed for accurate diagnosis and severe symptoms may require hospitalisation.