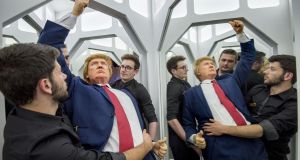 No more heroes any more: In real news, a fake Donald Trump gets installed in the new National Wax Museum in Dublin earlier this year. Photograph: Brenda Fitzsimons

Do you regard somebody as heroic? If so why? I don’t mean what makes them heroic. I mean, why do you need to regard anybody as heroic in your life?

I began to wonder about all this when I read about the death of Buddhist teacher Michael Stone who was held in extremely high regard by followers around the world.

Not long ago, he took a trip into Victoria in British Columbia, and reportedly tried to buy a controlled drug  from a pharmacy. He was refused and after getting a haircut and doing some exercise, he bought a street drug which contained opioids and fentanyl. The drug killed him.

Although he was receiving treatment, his condition had been worsening for some months

It appears, from a family statement that he had suffered from bipolar disorder for many years and that he unnecessarily hid this from his followers. Although he was receiving treatment, his condition had been worsening for some months. On the day of his death, he had been seeking an opium-related substance to treat the disorder.

This tragic event and its background distressed his fans worldwide.

Aside from the human tragedy there was another source of distress, I think. This is what one of his friends described in the Buddhist magazine Tricycle, as “the myth of the heroic self, of the one who finally gets it all right”.

Why do we see people in this way, as bigger than they are, as heroes?

Perhaps hero worship has something to do with the powerfulness of the parent to the very small child. For instance, my father was probably an ordinary man who worked hard on the farm, had a tough time making money out of it and kept worries at bay by making up rhymes in his head. I said “probably” because I feel bad about describing him as an ordinary man. In my heart, I think of him as extraordinary without being able to define what I mean. Perhaps my heroes reflect the qualities I saw in him as a child.

What makes a hero? Who knows? Fighting successfully against the odds is part of it

The problem with heroes, though, is that we become uncritical about them, even when critical thinking would be a good idea.

For instance, many of Donald Trump’s supporters offered him uncritical adulation and helped put him into office at a time when outside observers could see that many supporters were acting against their own interests.

But he was their hero and critical thinking went out the window as the hero worship was whipped up. We await the results when disillusion comes along.

What makes a hero? Who knows? Fighting successfully against the odds is part of it. Being in a leadership position is another. A certain level of fame is yet another because it is hard to be a hero if nobody knows about you.

By this criterion, for instance, Katie Taylor is a hero. She fought (literally and metaphorically) her way to the top although, for a long part of that journey, the public took relatively little interest in what she was doing. She is a leader in the whole area of women’s boxing and in its growing popularity. And she is famous.

When the hero succeeds, we feel good about it and so it is with Katie Taylor. But the thing is that she occupies a position greater than herself.  We project into her all of those positive aspects of ourselves that she embodies.

It’s odd how surprised, often gleefully vindictive, we are if they act like ordinary people

It isn’t easy being a hero and yet we need heroes. In that sense, hero worship is selfish. It’s all about us and not really about the hero who, when the audience goes home, is just a man or a woman alone in a room. It’s odd how surprised, often gleefully vindictive, we are if they act like ordinary people.

As for Michael Stone, with whose story I began this  column,  I will continue to read what he has written because the validity of what he passed on remains untarnished. And it’s okay that he was an ordinary man after all.