Can being a Girl Guide help develop life skills for being a woman in the 21st century?

Ignite 2017: When Girl Guides gathered to learn to be strong women in the 21st century 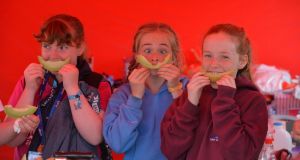 Girl Guides from Swords, Portmarnock and Rathfarnham at the Glow 6 Camp at Ignite 2017, where more than 600 tents were needed. Photograph: Alan Betson

Can being a Girl Guide help develop life skills for being a woman in the 21st century? That was the big question I carried with me when I arrived at Ignite 2017, the international Girl Guides camp in Rockwell College, Co Tipperary, in early August.

Seeing the historic boys’ boarding school (girls have been attending since the mid-1980s) thronged with some 1,400 10- to 16-year-olds girls and their leaders, camping out in more than 600 tents, is the first sign of girl power that strikes the visitor.

Girl Guides and Girl Scouts from Australia, Canada, Finland, Georgia, Malaysia, New Zealand, the Philippines, St Vincent & the Grenadines, the UK and the US mingle with 98 Girl Guide units from all over Ireland.

Within minutes of my arrival, I’m witnessing groups of teenage girls engaged in activities under themes of Be a Survivor, Be Unique, Be an Advocate, Be Limitless and Be Inventive. The titles alone inspire confidence.

The Be a Survivor theme includes sleeping out overnight in a makeshift shelter in the woods. Siobhan Kilduff from Ardagh Girl Guides in Co Longford participated in this activity. “We learned great social and survival skills, but we also learned about flooding in Honduras and how people have to react quickly and take care of each other if there is a red-light warning for a flood,” says Kilduff. In another Be a Survivor activity, the girls partake in a mock-up medical disaster and have to work as a team to carry the “body” through difficult terrain.

Teaching girls how to be responsible citizens is another key theme of Ignite 2017 and activities under the Be an Advocate theme include learning about the UN Sustainable Development Goals, climate justice, refugees and gender equality.

“Every girl at the camp does two of these activities and it gives them a sense of power and ownership and helps them realise that they can do something about these issues,” says Aisling O’Boyle, the Trinity College student/Girl Guide leader who organised the Be an Advocate activities.

Sitting in on a session in the Unicef tent, I see girls as young as 10 asking and answering questions about refugees.

“It gives them an awareness that refugee children can have a very different life to theirs – with fewer school supplies and clothes,” says Barbara Bowyer, a Girl Guides leader from St Louis, Missouri.

In one particularly immersive experience, the girls are given a note which they can’t read and are then tossed out of the tent without warning, leaving them confused and anxious. Bowyer explains the rationale for the activity. “At some point in their lives, one of these girls might be a hiring officer or an immigration official so we want them to realise what it is like to be an immigrant who isn’t able to read instructions,” she explains.

A large Irish Girl Guides poster identifying the nine grounds of discrimination that are illegal in Ireland flaps in the wind as a reminder to everyone that bullying of any form is not tolerated.

Confidence-building is a central theme of the entire camp and guide leaders are keenly aware of the challenges faced by teenage girls in social media now.

“It’s good for them to have girls-only environment because without the boys, they don’t have to impress and girls can like each other for who they are. Some of the girls are quiet and frightened but then they learn to speak up and try new things that they wouldn’t have tried on their own,” says Rachel Perry, a Girl Guides leader from Derbyshire in England.

Raft-building, kayaking, coding, model- making and robotics are some of the other activities at the camp. The Road Safety Authority is also on site to give girls a virtual driving experience – with a sombre warning that checking a text message can cause a car crash.

“We’ve just learned that our age group [16-24 year olds] is more likely to be in a car crash than anyone else,” says Eilidh Bremmer, from West Lothian in Scotland.

And simply spending most of your time in a relaxed, spacious rural setting for a week without distractions of mobile phones and shopping centres must in itself be a valuable experience.

Hilary Parker, a Girl Guide volunteer from London, says: “There is a resurgence of interest in Girl Guides in the UK at the moment, and overall in the UK, 50 per cent of women have been involved in Girl Guides at some stage of their lives. We’ve had high profile campaigns such as “No More Page 3 [Girls]”, the Free Being Me confidence- building programme and generally encouraging girls to take time for themselves and learn good coping strategies for exams.”

Gill Buckley from Tivoli Girl Guides in Dún Laoghaire says: “There are so many more life and school pressures on girls now; everything is so fast and intense that Guides gives them a non-competitive ways of doing things at their own level.  It’s very inclusive and each girl has to do her personal best.”

Sinead Burke (aka Minnie Melange), blogger, disability advocate and academic, is the Irish Girl Guides Ambassador for 2017. She visits Ignite 2017 on the same day as The Irish Times.

“I was a Girl Guide and it gave me the extraordinary opportunity to develop female friendships and skills of resilience, empathy, creativity and leadership.  It transformed my adolescent years,” she says. Burke says that her role at Ignite is to provoke discussion and create empathy among young women. “Women can be infantilised, belittled and told their opinions don’t matter or are facetious but Girl Guides is a space where all aspects of girls’ personalities can be validated and articulated as worthy and where they have an outlet to flourish, express themselves and be curious.”

Tripti Prassad is a Girl Guide leader from Winnipeg in Canada. She says that she is struck by the energy at this Irish Girl Guides’ camp. “It’s amazing. The Girl Guides in Ireland are very passionate, excited and opinionated. They know what they like and want to do,” says Prassad. Describing herself as a “girlie girl”, she says that doesn’t exclude her from anything on site.  “I drop the make-up because I hate having to wash it off at night time, but I braid my hair every day. It doesn’t matter what kind of a girl you are here, you can still do anything you want.

While the organised activities give a focus to the day, life at camp is as much about the informal chats that happen during mealtimes at the shared sub-camps. Camp leader from the Skylark Girl Guides in Portmarnock, Julia Gamble, says that “well-fed guide are happy guides. Meal times are one of the nicest times. All of our girls brought homemade cakes and we share these out over the week, which is a nice connection with home,” she says, Gamble operates a strict no-mobile-phones policy in her sub-group. “If girls are homesick, there is no point in them calling their mothers at 2am in the morning. We need to know about it and we say to parents that we have our phones with us and it hasn’t brought any problems,” says Gamble.

Without the distraction of mobile phones or television, the teenage girls also learn about organisation as each unit is responsible for buying and cooking food and managing clothes-drying and bedtime routines of their sub-camp. Helping with the wash-up, picking up water and food (there is an onsite supermarket) is also part of campsite life.

Girl guides from Ferbane in Co Offaly and Ardagh, Co Longford, share their sub-camp site. “I like it because there aren’t any boys, and girls are quieter,” says Fay McLoughlin from Ferbane. “It’s like one giant sleepover,” says another girl from Ferbane. And, when you cast your eye over the large campsite, with about 650 tents pitched on the former golf course at Rockwell College, without any cars or campervans, it certainly is one giant sleepover.

So, after meeting the Girl Guides and their leaders at this international gathering, the answer to my opening question – can being a Girl Guide help develop life skills for being a woman in the 21st Century? – would have to be a resounding yes.

I'm up for sex the whole time, but my husband sees it as not putting in any effort
3