Diseases of despair – a striking phrase but what’s behind it?

What’s really driving people to harm their own health? 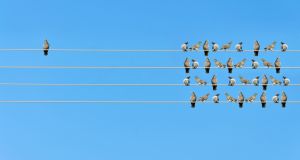 Isolation deserves far more notice in public debate than it gets. This is especially so as some researchers talk of an ‘epidemic of solitude’. Photograph: iStock

‘Death by despair” and “diseases of despair” are phrases I’ve been hearing more often as explanations for certain very negative trends in modern societies.

In particular, the phrase has been used in discussions of the falling life expectancy among certain groups in the United States, particularly middle-aged white people without college degrees.

Deaths by despair involve not only suicide but also long-acting forms of self-harm such as alcoholism and addiction to legal painkillers and illegal drugs.

Much of this, in turn, seems to have been stimulated by unemployment and hopelessness, the latter to a level which I don’t believe we have arrived at in Ireland.

More recently, I heard reference to diseases of despair in a news report on unhealthy behaviours in the UK. The speaker included smoking which was, I think, taking the phrase too far. To be addicted to tobacco is not the same thing as being in despair, and many a person has become addicted to alcohol without being driven to it by despair.

It’s an example of how striking phrases can be useful for a while but begin to outlive their usefulness when over-used.

Nevertheless, the message that there are wider forces involved in ill health than individual behaviours alone is, I think, important. It is, of course, a serious mistake to take individual responsibility out of the picture but it’s also a mistake to ignore the trends that drive individuals in the behaviours they choose.

This was illustrated for me by a report of the recent annual meeting of the American Psychological Association.

The deadly effects of social isolation on health was emphasised starkly by one speaker. Prof Julianne Holt-Lunstad, of Brigham Young University, told the conference that isolation was equal to or greater than obesity and other risk factors as a cause of premature death. She had reviewed research covering more than three million people, mostly in the US but also in Europe, Asia and Australia.

We have all heard that loneliness is bad for people’s health and that social connection is good for us. But this research suggests to me that isolation deserves far more notice in public debate than it gets.

This is especially so as some researchers talk of an “epidemic of solitude”, especially as populations age.

Some of those deaths by despair I referred to earlier are encouraged by that epidemic of solitude. What is important about Holt-Lunstad’s findings is that she pulls the camera back, so to speak, from individual causes such as alcoholism and painkiller addiction and shows us a bigger picture.

The thing about the bigger picture is that it isn’t so easy to dismiss people and it also isn’t so easy to come up with solutions. We can be quick to dismiss someone who blunts their emotional pain with painkillers and alcohol and to suggest that they need to get treatment to sort themselves out.

But causes such as social isolation are harder to dismiss or solve. They involve societal efforts and attitudes, and society is bigger than any one of us.

And it isn’t all about the American Nightmare. In Ireland drug addiction isn’t confined to the people you see on the boardwalk in Dublin or stumbling along certain city streets.

People are harming themselves with heroin and other addictions in rural Ireland too, in sight of those green fields that city dwellers romanticise.

Kick in the teeth

What’s going on here? Is it isolation? Is it the absence of an emotional education so that people don’t know how to handle themselves when life is kicking them in the teeth? Or has it always been there except that alcohol was the available drug?

It’s important to know what wider factor may be at the heart of these diseases of despair, otherwise how can we even begin to talk about it?

Even then, I am not altogether sure we will figure out what to do about it, whatever “it” is, but I know we need to try because despair is too bleak an outcome to contemplate.

Padraig O’Morain is accredited by the Irish Association for Counselling and Psychotherapy. His latest book is Mindfulness for Worriers. His daily mindfulness reminder is free by email. pomorain@yahoo.com @PadraigOMorain

Senator Lynn Ruane: I had a few wild years. Pregnancy calmed me down
8