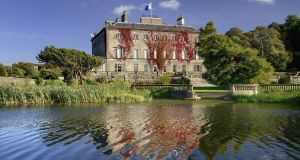 I’m always poised and ready to smile, to stop and chat, on my solitary Sunday walks through the sylvan grounds of Westport House. It is what we lone ramblers do.

Stride along with our thoughts and memories, and then, if we make eye contact, say a chirpy, “good morning”, or a cheery, “great day”, to the passing gaggle of teenagers, the little armies of families, the arm-linked and hand-holding couples carrying takeaway coffees and the immersion of intimacy.

Since the “new normal” has forced the world and its mother out into the fresh oceanic air here in the wild west, the Co Mayo town’s greenways and beaches, byways and boreens are filled with families on tricycles and bicycles, buggies and skateboards.

Isn’t there something about solitary Sundays and how they excavate our existential angst, eviscerate our aloneness much more than any other day of the week?

It is not just me. I’ve asked my home-alone friends and they agree. We agree too that ageism is becoming a pandemic, particularly in the western world, as families splinter in to all sorts of convolutions.

Traditionally, our culture was family-centred on the Sabbath: we went to Mass; attended a Gaelic football or hurling match; visited granny and grandad for the dinner in the middle of the day.

But grannies and grandads no longer fit neatly into that sepia-tinged image of him smoking the pipe on one side of the range and her baking queen cakes in her crossover apron on the other side.

As it happens, I’m watching a hilarious Netflix series, Frankie and Grace. It is about the lives of two septuagenarian women whose husbands have come out as gay lovers after 40 years of marriage. Actors Jane Fonda and Lily Tomlin live together and at this stage in my binge-watch have just established a focus group of friends to test vibrators they have developed to suit the older woman – particularly the inherent disadvantage of arthritic wrists. The entire series is so clever in its observations about older age. It should be compulsory watching for all those fragrant influencers who look as if they have just stepped out of a barrel of Botox.

For some reason this reminds me of the time more than a decade ago when I wandered into my home office and discovered a naked man in the spare bed.

It was a Sunday morning and I was home alone, or so I thought.

“What the f*** are you doing in my house?” I said, laughing, albeit hysterically.

The even funnier thing about it was that I had already walked in to the room half-asleep, still in my polka-dot pink pyjamas, to turn on the computer and hadn’t noticed my visitor.

It wasn’t until I returned from the kitchen with my mug of coffee that I suddenly saw his clothes strewn across the floor and his bare arse winking at me.

“Who the hell are you?” I asked, a little more skittishly.

Turned out I had left the front door unlocked the previous night courtesy of a habit learned during my former life on an offshore island. At least out there across the bay if a naked man turned up in your spare bed you’d not only know him but his seed and breed.

The poor lad was harmless and ran out of the place like a scalded cat. Turned out he was grappling with alcohol issues, had got lost on his way home from the pub and tripped across my most amenable doorway.

So why did this old yarn come to mind? Simply because after months of solitary Sundays, there is a chance if he turned up again, I might ask him to stay for brunch; well, once he had his clothes back on. And afterwards I might offer to bring him on a soothing walk along the frothing river that gushes through the grounds of Westport House.

After all, we older people have lots of stories to tell, lots of experiences to share and we are great at giving advice – sometimes while laughing out loud, especially at ourselves.