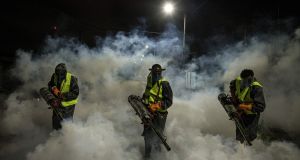 On July 23rd, Uganda’s ministry of health announced the first death from coronavirus in the East African country – a 34-year-old woman, who was initially treated for severe pneumonia, and passed away six days after being admitted to hospital. The same day, the World Health Organisation warned that more than 10,000 healthcare workers across Africa have now been infected by the virus.

The number of confirmed cases on the continent is surging and has topped 800,000 – an eightfold increase since May 22nd – though South Africa accounts for more than half of them. There have also been more than 16,600 deaths.

The initial lack of confirmed transmission across the rest of the continent caused much debate, with some medical workers saying Africa isn’t being given enough credit for how quickly many states reacted and implemented restrictions. Some African countries, which have managed to keep their caseloads low, have a history of dealing with outbreaks, including cholera, Ebola and measles, and are used to contact tracing and social distancing measures.

“It’s good that the Covid infection hasn’t been as bad as the western world,” said Dr Phyllis Kisa, a paediatric surgeon, who works in Mulago national referral hospital, in Uganda’s capital Kampala. “We’ve not really had someone sick the way it has been in Europe, because I don’t think we would have been able to deal with it.”

Kisa said many medical staff are theorising that the strain of the virus in Uganda may be weaker than what has been infecting people in Europe, though there is currently no proof of that.

“We are exposed to a lot of germs here that overtime might give us a cross immunity to something. Also the lifestyle is different,” she said. “If you think about Italy where people smoke, the numbers are quite low here in comparison.”

However, she said they still aren’t prepared for a massive surge. “If we got the worst-case scenario, the need for things like personal protective equipment in hospital, we really don’t have many of these things and health has not really been a big priority,” said Kisa.

Funding has come through from international organisations to support things such as hand-washing facilities, but “the biggest challenge comes if we get the really sick patients and they need intense care. I don’t think we could meet this”, Kisa said, adding that the cost would be too high for many patients, and staff need to be specially trained. Uganda – a country with more than 40 million people – had just 55 ICU beds at the beginning of the crisis.

“What happened is that [restrictions have] not only delayed when it hit many cases but for some countries in there it has flattened the curve, so to speak,” said Kate White, a Covid-19 medical manager for Médecins Sans Frontières.

“However, we see many countries in Africa struggling to be able to test . . . so what you see is if countries don’t have capacity to test, depending where they are in their mode of transmission there will come a moment when it becomes very difficult to control community transmission.”

In a press conference last week, Dr Léonie Claudine Lougue, Burkina Faso’s minister of health, said health workers were fearful at the beginning of the pandemic and needed to be trained “so they could protect themselves”. The west African francophone country recorded its first cases on March 9th, and has since confirmed over 1,000 more. As with many other African countries, the first cases were Europeans, a discovery that led one Senegalese newspaper to accuse Europe of “coronaising the continent”.

Lougue said things have improved recently, with more than 900 people cured and no deaths over the past two months.

At the moment, WHO is organising the transfer of 41 million personal protective equipment items to be shipped from China to 47 African countries. “One of the biggest challenges in protecting health workers has been the global shortage of personal protective equipment,” said Dr Matshidiso Moeti, WHO regional director for Africa, speaking last Thursday.

But Moeti also said healthcare workers need other types of assistance. “Health workers have concerns about taking the virus home, they suffer psychosocial pressures from working around the clock and in some communities, they face stigma and discrimination.”

In Sierra Leone, which survived the deadly West African Ebola outbreak between 2014 and 2016, Dr Alpha T Wurie, the minister of health and population, said his government is finally launching a new national insurance scheme for healthcare workers. Among the 66 coronavirus patients who have died so far are three doctors, he said. The insurance scheme will pay either medical costs, or something to a medical worker’s family if they do pass away.

“My heart goes out to all those who have lost their loved ones during this pandemic,” said Dr Michael Mwachiro, a general surgeon at Tenwek Hospital, in Bomet, western Kenya.

Mwachiro is grateful his country had some extra time to get ready, compared to Europe, the US and China. Kenya now has more than 15,600 confirmed cases and 260 deaths. “I think that we feel better prepared now than at the time the pandemic was starting. We have more information, we have access to a global network of knowledge and we also have had time to study the disease more. At the global level there are promising prospects of getting a vaccine locally soon,” he said.

“I think that there has been a silver lining in this very dark cloud, in that the pandemic has forced us to confront one aspect that had been neglected in many parts, which is access to quality healthcare.”

A reopening of some parts of the economy has led to a new surge in Covid-19 cases, which Mwachiro is concerned about. “In Kenya I think that we have had pragmatic solutions and leadership. However, the system is only as strong as its weakest link and so for us the goal is to ensure that all counties have facilities ready to care for patients.”

36 hours on Northern Ireland’s Causeway Coast: ‘Everyone is having a wild time’
7