Drinking in lockdown: ‘I excused myself saying it was medicinal’

Are you consuming more or less? Readers tell us how their habits have changed 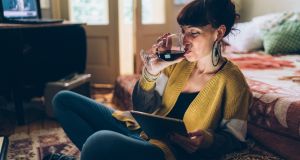 ‘What I really missed was the social aspect of drinking.’ Photograph: iStock

With pubs closed and everyone stuck at home, off-licences are doing a booming trade. The sale of take-home alcohol in recent weeks is almost 40 per cent higher than it was in the same period last year.We asked readers if their drinking habits had changed in lockdown. Here’s what you told us.

Caitriona Scully: ‘I drank every evening in the first week or two’

I had a lot of bottles of Aldi prosecco I’d bought on special saved for a friend’s hen party, which I drank every evening in the first week or two. I then cut that off, realising how damaging it was. I have since taken up learning to make classic cocktails to pair with the new recipes I cook - like margaritas with my enchiladas. I feel like it’s more considered and mindful consumption, instead of lashing through a bottle or two of cheap wine or beer.

Colm Alley: ‘I have not had a drink since January 6th’

I have not had a drink since January 6th on a night out with friends in Portlaoise. I don’t drink very much anyway. An extended dry January pushed into March, so I decided to continue with my journey through the Covid-19 crisis. One interesting thing I am noting is that the longer I stay away from alcohol, the desire to have a drink diminishes further. If this is mid-life crisis, how bad?

Kevin Feeney: ‘I am a little concerned about this new habit’

Since lockdown started, I have seen an increase in the number of evenings I have a drink, and an overall increase in consumption as well. It’s the boredom really. I make sure that I only drink on four nights of the week, consuming more healthily on the other three. I drink plenty of water as well as coffee and red tea. I am a little concerned about this new habit, but have maintained an exercise regime of at least three 5K runs a week as well a walking the dog at least as much on other days. I think when routine turns to normal, I’ll be able to reduce consumption again, as this increase is just within the house at this time.

Jean Watson: ‘I have not had a drink in five weeks’

While I was never a big drinker, I did enjoy a glass of wine of two at the weekend and would open a bottle of wine if I was at home. Seeing as I am isolating on my own, I decided now was a great time to catch up with myself, and enjoy that down time that I have been forced to have. I own my own business so down time is something I am unaccustomed to, but from now on it will be high on the agenda. I have not had a drink in five weeks. I eat three meals a day at more or less the same times, I walk lots and I can now sleep nine hours in a row. I have never felt so well. I hope to continue regime as much as possible when we return to work. I don’t miss the drink, and while I am not saying I will stay off it forever, I think I will be more conscious of what I am drinking in the future.

Orla Purcell: ‘What I really missed was the social aspect of drinking’

Like many of us, I drank a little extra wine to calm my nerves at the start of the restrictions. I excused myself saying it was medicinal! Then, looking at the empty bottles mounting up over the weeks and realising what I really missed was the social aspect of drinking, I stopped completely a few weeks ago. No alcohol for me until the lockdown is lifted, and I can enjoy a drink with friends and loved ones. Result: I’m sleeping better, and I’m less edgy.

Jeremy Dyer: ‘I’ve had none at all during this pandemic’

Drink was a problem for me, and I quit about two months before coronavirus arrived in North America. I’ve had none at all during this pandemic, despite boredom in social isolation, and I intend to remain abstinent. I go on lots of walks in my city, and I notice that when the weather’s good and people are outside in their gardens or washing cars, many of them have a tin of beer or what appears to be a cocktail, even quite early in the day. Those statistics of increased off-license purchases recently seem consistent with what I’ve observed. Lots of buzzed folks out there.

My usual routine wound have been four or five pints of Guinness on a Saturday evening with friends in local pub. On Wednesdays after golf, I’d have one pint of mid-strength Guinness. Once or twice a month I’d have a few pints on a Thursday afternoon. I’d probably have a bottle of wine a week too, and occasionally a glass of Cognac. Since cocooning started I’ve had a bottle of beer with my evening meal. I have had three cans of draught Guinness in the past three weeks, and two or three glasses of wine over the same period. I’m looking forward to pubs opening and normality returning soon - hopefully.

At first I thought I was hungover: A stroke at 28 years old
6

How to make an authentic Indian chicken curry at home
7

The clitoris has 8,000 nerve endings (and nine other things we learned from a new artwork)
10