Wild foods: where to look and how to find them, wherever you live in Ireland 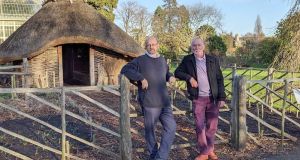 Authors of The Wild Food Plants of Ireland Paul Whelan and Tom Curtis. Their book is best regarded as a type of treasure map, leading readers on a journey of discovery to unearth the nutritious, unusual wild foods that are growing all around us

Ireland lost much of our traditional knowledge of native plants and herbs during the devastation of the Famine and the colonial oppression that preceded it, yet in recent years we seem to be trying to rediscover it; with leading chefs, TV survivalists and outdoor adventure guides all keen to reintroduce us to the hunter-gatherer practices of our Mesolithic forbearers, who first pioneered the practice of rummaging around the undergrowth for tasty roots, aromatic stalks and nutritious leaves.

With every year, more of us are relearning the basics of foraging: how to distinguish delicious field sorrel from lethal Lords and Ladies, or how to scrunch up a nettle and pop it in your mouth without getting stung. Now, a new book, The Wild Food Plants of Ireland, offers a whole new level of immersion in this disappearing wisdom.

Compiled by the botanist and horticulturalist Tom Curtis and lichen-expert Paul Whelan, the book represents a paradigm shift from any previous Irish field guide, and has the potential to change your entire awareness of, and attitude to, the wild weeds and scrubby shrubs you encounter on a daily basis on kerbsides, field margins, rubbish tips, cliff tops, hedgerows and lawns. The aim of the book is to “show chefs, cooks, foodies, foragers, seed savers, farmers, botanists, and the general public the richness of our wild flowering plants which have been and still are used for food”.

Curtis and Whelan’s main focus is on something called crop wild relatives, which are the wild ancestors of the modern vegetables, fruit, crops and herbs that we now depend on. “As well as being potential donors of resistant genes to modern cultivars, they are a reservoir of rich and diverse flavoursome foods,” they write.

By ignoring and gradually eradicating these wild ancestral plants, we risk losing their genetic diversity and their consequent traits of adaptability and vigour. The authors list 162 different ancestors of our modern food crops, giving detailed descriptions of each, alongside a history of their uses and their cultivation, their distribution in Ireland, their culinary uses, their current and potential economic value, and whether they are native or were introduced prior to AD 1500(archaeophytes) or after (neophytes).

Among the nuggets I learned was the fact that wild asparagus (lus súgach) grows on sand dunes from Wicklow to Waterford. It is more prostrate and blueish than its cultivated descendent, though equally delicious; yet as a plant protected under the Wildlife Act (2015) it’s an offence to pick it.

There are many troublesome weeds which would benefit both us and the ecological diversity of the countryside if we ate them, such as couch/scutch grass (broimfhéar) whose roots and rhizomes are “succulent, sweet and nutritious, and taste like liquorice”. Scutch roots were widely used during the first World War for their anti-inflammatory properties and can be ground up to produce a flour for bread-making.

Another invasive ground-covering weed that tastes delicious is ground elder (lus an easpaig). This aggressively creeping scourge of gardens and roadsides, loses its nasty, pungent smell when cooked to leave a delicious spinach-like vegetable that is best eaten between late February and May. Consuming it can help to control a hard-to-eradicate bane of gardeners. The same can be done with its equally invasive botanical cousins, cow parsley and hogweed, whose shoots and stalks are also tasty when eaten young.

But be warned: the hairs on both these plants when mature can induce phytophotodermatitis, which leaves human skin permanently liable to sunburn. Giant hogweed is even more dangerous in this respect, and should be avoided at all costs.

A far safer plant is charlock/prashock (praiseach buí) which you’ll also find on road sides, field margins and waste ground. It was once a pernicious weed, though is somewhat rarer now since the introduction of herbicides. It was a staple food during the hungry months when the old potatoes were finished and the new season crop was not yet ready.

The weed was mixed with oats to form a gruel, which is why the Irish word praiseach still means porridge today. Its connection to food shortage and starvation has tarnished its reputation, but it is nevertheless a delicious and versatile vegetable that can be stir-fried like spinach, boiled like kale, or pureed like nettles to form a soup. Its flowering stems can be steamed like broccoli. You can also sprout the seeds and use them as a superfood garnish, or else mill the dry seeds and use like mustard.

No matter what part of the country you are in, this book will lead you towards a larder of vitamin-rich wild foods growing year-round under your nose. I had never before noticed the vast amounts of wild radishes that grow through winter and summer in fields, gardens, and waste ground along the coast and am now busy fermenting them and making radish sauces.

And while I knew about bilberries (fraochán), which are common on the hills of Ireland on acid soils, I hadn’t noticed their cousins the cranberries (mónóg), which occupy wetter areas of upland bog, or the cowberry (bódhearc) which grow on “cliffs and heaths, especially in the drier parts of the mountains”. All three fruit in late July and August, and I’ve possibly picked them all, thinking they were different forms of fraughans.

Another berry that I’ve seen all my life, but never taken any notice of, is the barberry (barbróg), a deciduous, prickly shrub with finely toothed leaves and clusters of oblong, scarlet berries in autumn. I’ve seen it in hedges and on rocky ground in west Kerry and Clare, but never knew that its berries were tart and refreshing. They are still commonly gathered in “France, India and North America where it is called ‘poor man’s red currant’”. It contains a valuable active ingredient, berberine, which inhibits the growth of bacteria and has been used medicinally in Austria for respiratory infections, colds and flu. Nowadays the shrub is increasingly rare, as it has been the focus of an eradication scheme because it harbours a stage of the life cycle of the black rust fungus of cereals.

Perhaps the most surprising berry of all to discover growing wild in Ireland is the goji (lus an mhangaire), the latest superfood from China that attracts high prices in health food stores. It can be readily found along much of the east coast of Ireland and in a few western spots once you learn to identify its long, thorny branches that arch out in elegant curves from an upright shrub. Its oblong reddish-orange berries appear along the branches from September to November, but unless positioned in a sunny, south-facing site, they often don’t fully ripen.

Goji was introduced to Britain as a hedging plant in the late 1730s, and became naturalised near the coast on seashores, tracks and waste places. Even if the berries aren’t fully ripe, they still contain high amounts of antioxidants, and the leaves can be used as a vegetable in soups and in numerous Chinese meat and rice dishes.

The book is best regarded as a type of treasure map, leading readers on a journey of discovery to unearth the nutritious, unusual wild foods that are growing all around us, but it also serves a more serious mission of educating us on the wild ancestors of the worryingly-few plant varieties used in modern agriculture. Just 30 crops provide 95 per cent of the world’s nutritional needs. If these were to fail, our best hope of avoiding chronic food shortages might be to return to our ancestral food plants, in the hopes that their genetic diversity could offer solutions to whatever pest, disease or climate alteration had wiped out the modern agricultural cultivars.

For food security alone, we owe it to ourselves to became familiar with the scores of edible plants that are growing wild all around us. It allows us partake in the nutritional and culinary bounty freely available in nature, or at least it might prompt us to stop poisoning these vital plants with herbicides and blitzing them with strimmers in our compulsive obsession to control our surroundings.

The Wild Food Plants of Ireland: The complete guide to their recognition, foraging, cooking, history and conservation, by Tom Curtis and Paul Whelan, with foreword by Darina Allen, is published by Orla Kelly Publishing