Protein powders: What are they and do they work?

Reading labels: They claim to help you both bulk up and lose weight. Is that possible? 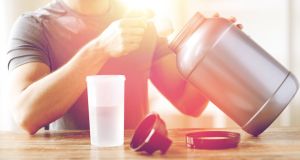 Protein is important for a balanced diet, but the average adult needs just 0.75g of per day for each kilogramme of body weight.

It’s not that long since protein powders were seen as something used only by bodybuilders. Keen to make the most of their muscle-building potential, they downed products with names like Maximuscle and Impact. Given that protein is essential for growth and repair in the body, it seemed to make sense.

Now, however, protein powders are being sold as suitable for everyone with an interest in health, whether they want to bulk up or to lose weight.

How does that work?

A protein shake is seen as helping one to feel more satisfied and thus eat less rubbish.

You can buy them in supermarkets, health food shops and chemists, such as Boots, in a range of flavours from lemon drizzle to chocolate brownie. The number of food and drink products launched in the UK with a high-protein claim rose almost 500 per cent between 2010 and 2015, according to Mintel Global New Products Database. The global sports nutrition market is worth more than $10 billion annually, according to Euromonitor, though it has long since broadened its reach to sell to those those who don’t exercise much as well as athletes. Adding some protein powder to a green smoothie is an Instagram staple.

So what can we learn from the labels on some of the powders on sale here?

Protein powder used to mean whey, which is derived from milk and is essentially what is left over when making cheese. That has since been joined on the shelves by powders made from pea, rice, hemp and soya. Then there are the collagen ones.

Planet Paleo’s Pure Collagen, for example, says on the front of the shiny black tub that it is “gluten free, dairy free and 91 per cent protein”. The paleo diet involves trying to eat like our ancestors did during the hunter-gatherer era, but without all that messy hunting and gathering. Dairy-free does not mean vegan or vegetarian. This product is a form of gelatin taken from “pasture-raised cows”.

Collagen, which is present in the skin, bone, cartilage and blood vessels of the creatures, is processed into a hearty powder. The product is made in the UK, but the label makes no reference as to where the beef might come from. It also describes the product as “primal nutrition evolved”, which is just more meaningless marketing speak.

One Irish company making a range of whey powders is Kinetica, which is owned by the Carbery Group in Cork. Kinetica makes its own proteins in its dairy facility. Hence the Irish flag on the cover. It also has a banner saying “drug tested”, which sounds ominous but means its products are batch-tested within the World Anti-Doping Agency framework. This is because not all products marketed to athletes have been found to be untainted.

The vegetarian powders take a different approach to promoting the idea of quality. Nuzest’s Clean Lean Protein powder in smooth vanilla flavour says it is “clean” because it is “all natural and 100 per cent vegetable”.

The reference to “clean” is an attempt to woo those attracted by the “clean eating” trend, which involves avoiding refined sugar and processed food. This is ironic as the peas in this packet will have been processed, unlike freshly frozen ones. The ingredients are: pea protein isolate, natural vanilla and katemfe fruit extract.

The yellow pea used is easy to grow and is not one of the top allergens, unlike soy or dairy products. It is also easy to digest. The nutrition label shows 0g of sugar, yet it has an odd, sweetish tang. That will be thanks to the katemfe fruit extract and vanilla. It must be an acquired taste.

The biggest surprise with this product is that it has the words “the Alkaline Advantage” with the trademark sign. Our pH balance cannot be changed by what we eat. It may be trying to appeal to those who have read that an alkaline diet is something that can make one healthier, even though this theory has been debunked.

Protein is important for a balanced diet, but the average adult needs just 0.75g of per day for each kilogramme of body weight. So someone who weighs 70kg should have about 52.5g a day. That is best taken in from a variety of foods such as meat, eggs, nuts and pulses so as not to miss out on the vitamins, minerals and fibre too.

These powders have their place, but are an expensive, odd-tasting choice for those who don’t need them.