Pinch of Nom: ‘Fat is a word people use willy-nilly. It makes me angry’ 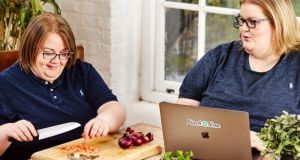 Kay Featherstone and Kate Allinson were at a Spice Girls concert last spring, just two figures in a sea of people. As they gazed around the stadium, Featherstone broke down in tears. Not because of anything the Spice Girls were singing, but because the two chefs were consumed by the thought of their own followers; they have more than 900,000 on Facebook. “When we go to a gig, it’s like: ‘We could fill this space so many times!’ It becomes very, very scary,” Featherstone says.

They got the same feeling at Fleetwood Mac. Featherstone has sweaty palms just thinking about it. She and Allinson, who are business as well as life partners, try to “forget the noughts” and imagine a community of 900, but it’s still a long way from the days when they had their own restaurant with customers who came in every Sunday and even brought the pair presents if they went on a cruise.

'I sometimes worry what people will think of us. Like, why the hell are you pushing a diet book when you’re not a skinny minny?'

No wonder Allinson, 48, and Featherstone, 34, sound bewildered, if not downright terrified. Their success as the chef duo Pinch of Nom has been sudden. Last spring, their first book of simple slimming recipes sold 500,000 copies in just five weeks (and recently passed the 1 million mark). Last month’s follow-up, Everyday Light, sold nearly 130,000 in its first week, knocking David Walliams from the top of the bestseller list.

“It has been a little bit crazy,” Featherstone whispers, as if danger lurks nearby. They have had offers for TV shows – “offers for everything” – but have declined them all because they are “really shy”, says Featherstone, although she is “the gobbier half because Kate doesn’t usually like to talk”. (“That’s fair,” says Allinson, whose T-shirt is emblazoned with the slogan: “Introverts unite – separately in your own homes”.) When I ask if they might choose to meet their followers – I’m thinking of events – they say that they did bump into some once, and you can’t say it won’t happen again. “But it has never been about us,” Featherstone says, and Allinson, a sort of quiet chorus, echoes her words. “It’s never been about us.”

This is something of a mantra for Featherstone and Allinson, and I’m intrigued by their wish to deny they are protagonists in their own enterprise. After all, many of their recipes are autobiographical. “Tin of praters”, a bacon, potato and onion bake, is lifted straight from Featherstone’s childhood, while the entire Pinch of Nom adventure took off when the two went along to their local Slimming World in Wirral four years ago, then began to post their own recipes to a growing Facebook community.

Their personal story is at the heart of their business – but so is their disavowal of it. “We don’t spout about ourselves. We’re not that sort,” Featherstone says. They don’t take selfies; even on their first date, the only picture they took was of a gull. Photographs of them are rare.

‘We don’t do pressure’

Neither of them has ever followed a specific diet; not Atkins, 5:2, keto nor intermittent fasting. In many ways, they are unlikely authors of a diet book. And this, I suspect, is at the heart of the pressure they feel – a double bind in which the story of their efforts to lose weight speaks to their community, but also creates an expectation for a narrative of progress. “I sometimes worry what people will think of us. Like, why the hell are you pushing a diet book when you’re not a skinny minny?” Featherstone says. “Because it’s the accepted norm that people lose weight, [then] they do a book. But we’re still in that process.”

In newspaper articles, Allinson and Featherstone are often described as “two fat chefs”. They laugh uproariously when I point this out. “Do you know we have a little list of the things we have been described as?” Featherstone says. “Fat. Middle-aged. Jolly.” Allinson chuckles.

“We found it really funny,” Featherstone says. Then the tone abruptly shifts.

“Sadly, it is the way that some people talk about people of our size. ‘Fat’ is a word that people will use willy-nilly to describe people of size. And I personally hate it,” Featherstone says. “It makes me angry deep inside …”

'When people are trying to diet, and the rest of the family don’t need to, it can feel as if you’re on your own'

In March, the pair revealed they were aiming to lose 190kg (30 stone) between them. Featherstone had so far lost 44kg and Allinson 31kg. I’m curious as to how they divvied up the target. Featherstone says: “We came up with that between us.” They didn’t figure out how much each wanted to lose? “We’ve never really had a target,” Allinson says. “Because I think that can put a lot of pressure on.”

I’m curious to know if they have lost more weight since the first book, but Featherstone says that the numbers are still what they were.

The body of any diet author will always be taken as a measure of success. Is that on their mind? “It can’t not be,” Featherstone says. “We think about things a lot. It’s why we’re both so anxious all the time … We still struggle. Even now. We kind of fluctuate. We have a steady loss.” And while fluctuation and steadiness may seem at odds with each other, no doubt those who are sharing their weight-loss “journey” will relate to the apparent contradiction.

“We’ve always been really honest and open about it,” Allinson says.

They have had an intense and challenging year, adjusting not just to huge public interest, but also to the loss of Allinson’s mum. Or, as Featherstone puts it: “We’ve had a great year, but we’ve also had a s**t year.” Allinson’s mother died in January, the day after the couple told her they were going to publish a book. When Allinson says this, her eyes are wet and shiny.

“Has anyone got a tissue?” Featherstone interjects. I assume she is asking for Allinson, but she quickly adds: “Because I’m wearing mascara and I know what’s going to happen.” Allinson fishes in her bag and passes her one. They happily rattle off their differences – Allinson is organised, decisive and likes strong tea; Featherstone is disorganised, indecisive, talkative and takes her tea milky. But the two of them seem to understand and meet each other’s needs..

They met nearly 15 years ago, having seen each other’s profiles on Gaydar Girls. “But I didn’t message you for ages,” Featherstone says. When they met, they got in the car and ended up in Rhyl, north Wales.

Within six months, Featherstone had moved into Allinson’s family home in New Brighton, Wallasey, where the pair still live with Allinson’s older sister, Lisa, and her dad (whom the three of them look after), as well as two cats. “I’ve been in the same house for … how long is it? Forty-five years,” Allinson says.

Before this one, she lived in the house over the back, which was her nan’s B&B. I am trying to picture how the house – “just an old Victorian one”, Allinson says – must have felt with five adults in it.

When they met, Allinson ran her own restaurant, Cromwells, in nearby Irby. Featherstone quickly took on front of house. Food was the driver of their relationship, and they went into work even when the restaurant was closed. “I washed the pots. I wanted to learn how this whole thing worked.” In their downtime, they watched, among other things, Two Fat Ladies (they have the DVDs) and ate lots of Chinese takeaways.

While Allinson had been to catering college and had gone on to be the head chef for the Boddingtons chain, Featherstone had left school at 16. She had helped a bit in her parents’ florist shop and did voiceovers at a radio station in Liverpool, but food – and Allinson – provided a place that felt like home.

The restaurant was hard work. Things came to a head when Allinson’s mum, who did the accounts, had a brain haemorrhage. Within a few months, the restaurant closed, as they focused on caring for her. “We grieved for the restaurant,” Featherstone says. “It hit us hard.” Next they worked for a Canadian IT company which, if I’ve understood correctly, speeds up the internet by using datacentres on the edge of the cloud. It sounds an unlikely fit, but both women say they wanted nothing to do with food after the restaurant shut. In between were months where “we didn’t do a whole bunch of much”.

'It’s an ownership thing. I can call myself fat but no one else has that right. It’s not a word I like any more'

Then, in January 2016, Lisa persuaded them to go to Slimming World. They began to create the dishes that went into the first book in the “tiny” family kitchen that, they say, is smaller than the toilet in the offices of their London publisher, where we are meeting.

They photographed their food at the dining-room table. It must have been a squeeze, but Allinson’s mum said: “If you want to do it, do it well.” Allinson’s dad lost a stone unintentionally just by eating their food. Then at Slimming World one week, they heard another person discussing a Pinch of Nom recipe and realised how far they had come. At that point, no one in the group knew who they were.

Now they have a test kitchen, a team of 11 and an army of followers they are scared to think about. Featherstone, Allinson and their family all eat the food they make. “When people are trying to diet, and the rest of the family don’t need to, it can feel as if you’re on your own,” Featherstone says. She knows this from personal experience. At her all-girls’ school, she was “the tall one and the big one” and dieted to fit in, but was bullied. “The experience of being different hardened me,” she says. But I suspect this hardening is a work-in-progress.

I am surprised, when I get home, and reread the articles that describe Allinson and Featherstone as “two fat chefs”, to see that the person who chose those words was none other than Featherstone herself. I email her to ask why, given how the description angers her, and she replies that “it was a way of saying it first … It’s an ownership thing. I can call myself fat but no one else has that right.”

Over the past six months, however, something has shifted; her feelings have evolved. “It’s not a word I like any more.” – Guardian

Pinch of Nom: Everyday Light by Kay Featherstone and Kate Allinson is published by Pan Macmillan