Mister S review: The spark is missing at this fire-cooking spot 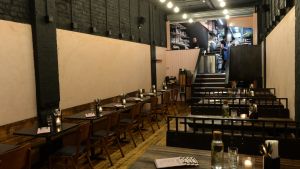 There’s no smoke without flavour right? You arrive in out of crisp winter air into a place that smells like a barbecue convention where they’ve just kicked off the kippering demonstration, and you’re bound to get that smoke hit. Eau de bonfire lacing everything with a gutsy, lung-busting finish.

That’s what we hope for in Mister S on Camden Street in Dublin, where an early evening walk-in sees us sitting at one of the small tables for two in this narrow room decked out with timber benches, bare brick walls and a kitchen on a raised platform at the end. The menu has been written to sell, with what sounds like all the good ideas in one short appealing list.

“Tap?” our server asks for our water choice, not your typical first option in this still or sparkling, margin-hungry city. The water arrives in a cork-stoppered carafe with a sprig of rosemary in it. It’s a nice start to what looks to be shaping up to a really enjoyable feed.

The small plates (and they are small) are on mismatched floral side plates, the look of which scream “granny’s delph cupboard”. There’s a hand-drawn logo on the top of the menu. The reach for authenticity seems a little over engineered.

As is the food. The best small plate is the burnt end Rendang spring roll – two crisply fried scrolls of juicy, nicely spiced and sweetened beef. The mystery about this one is why it has been spring-rolled. The flavours are good enough to let this Indonesian classic stand alone as a meaty opener. Unlike the “smoked chicken romesco”, two flaccid skinned pieces of chicken which taste okay but not smokey in the least, like the only smoking they’ve received was the journey through the kitchen out into the restaurant.

The smoked trout dish is even more mystifyingly smoke-free. Not only is the trout sweet and finished with a tangy cockle and apple dressing, its texture is of lightly poached fish, fluffy and light rather than anything that has spent any significant time bathed in flavour and texture-shifting clouds of grey stuff.

Turns out those small plates will be the highlight of our brief visit. A plate of cod, topped with fingernail-size brown shrimp (the nicest thing on the plate) and a “curry sauce” is pushed around, tasted and then not eaten. The slippery consistency to the fish is off-putting as the food rapidly cools. I take a chunk to taste and manage a small mouthful. The largely-uneaten dish is taken back without anyone enquiring what went wrong.

My marinated pork tomahawk is just that, a long flat plate of sliced meat covered in a sauce that cools to the consistency of pre-set jam. Like the fish, the pork is more appealing when it arrives, not quite piping hot but warm enough. As the meat grows tepid whatever marinading happened doesn’t save it from toughening down to a dismal chew, like gnawing on hipster satchel leather, rather than a luscious meld of meat, marinade and sauce.

Maybe Mister S is having a bad night. Or maybe Dublin is reaching peak concept over execution

Sides are also a masterclass in what sound like good ideas, poorly executed. Thin raw slices of kohlrabi taste salty, as if someone started a ferment but couldn’t wait to actually let it happen. They’re folded into a fussy small bowl and interspersed with “pickled pear” slices that are just brown and sad, neither obviously pickled nor pear-like. There’s a nasty clump of raw curly kale in the bottom which might have taken it all up a notch but just makes it worse as it has been doused in oil. Brown butter and miso roasties are fine for the first few crisp ones on the top of the bowl but have mulched down into salty brown mush on the next layer down.

Dessert doesn’t get to save the day because our time is up. They need the table back. There’s another pair of diners lining up to take our place in this restaurant that could be so much better than it is. Maybe Mister S is having a bad night. Or maybe Dublin is reaching peak concept over execution. Looking, smelling like the real deal isn’t going to convince anyone if the food simply isn’t up to scratch.