Why are Irish supermarkets selling apples from Chile, South Africa and New Zealand?

Irish shops are full of apples from exotic climes, as well as France and some from Ireland. 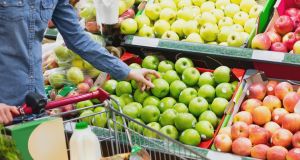 There are 68 varieties of Irish apple and one variety or another of eating apple can grow here between August and March, according Bord Bia. Photograph: iStock

Which is farther away from Ireland: Chile, South Africa or New Zealand? That’s the type of thought I find myself having in the fresh fruit aisle of the supermarkets these days. Apples in particular seem to come from far-flung locations.

At about 18,000km, Auckland is the farthest. Johannesburg is surprisingly far away too, at about 14,000km. With Chile, it depends which part of the country you are comparing it to: north, central or south. It’s about 11,000km to Santiago, which is half way down the country.

In the middle of September, the Irish shops were full of apples from these exotic climes, as well as France and some from Ireland.

The argument goes that in order to have fresh apples all year round, we need to bring them in from far away. This is where Chile is winning as its apples thrive in the colder central and southern regions of the country between January and November. Its exports were up 33 per cent last year. It can supply more than 40 varieties of apples, with Granny Smith and Royal Gala almost year round. Even though it takes about three weeks to ship them here, it still counts as a cheap, reliable source.

It’s pretty chilly here too and Irish cooking apples – Bramleys – are in season all through the year. One variety or another of eating apple can grow here between August and March, according to a guide to seasonal Irish fruit from Bord Bia. We just don’t have the large orchards seen in other countries to provide a consistently supermarket-pretty supply. So the best place to buy local is at farmers’ markets.

The perfection seen in supermarkets is thanks to robots. One packing machine, the SmartPackr2, takes more than 70 photographs of each apple so that the best-looking side can be positioned outwards to impress customers. It has two robotic arms and can handle two apples per second.

The machine also grades by size. So, for example, one packet of Aldi’s Pink Lady Apples from Chile also says that they are 70/75mm. That’s a margin of just 5mm, which would be difficult for a human to detect but easy for a finely-tuned robot.

Packets of Aldi’s Granny Smith from France also have a tiny margin as they are listed as 63-68mm in size, thanks to the robots.

As with many other packets, it also says they are “Class 1”. That might seem like the top standard, but that honour goes to “extra” class, which are the highest ranking under the EU system. Class 1 is next and then Class 2.

The label also says, “I’ll keep fresher for longer if you keep me in my packaging in the fridge.” That advice is given so as to mimic the conditions the fruit experienced while being transported across oceans to get to Ireland.

Companies, such as Maersk, pride themselves on providing “controlled atmosphere” containers with the ideal blend of oxygen and carbon dioxide that help to extend the shelf life of the fruit by slowing down the ripening process. These containers are partly why we can get all kinds of delicate fruit from around the world any time.

There is also a best-before date on each packet. This is set for a couple of weeks after they have been put on the shelf. These apples have already been travelling for some time and have been moved about with the transportation before being put on the shelf. Research has shown that consumers pay particular attention to the best-before date on apples, but there is no need to get hung up on the number. If the apple looks good, smells good and does not have brown spots, it is good to eat.

Apples can naturally keep for months if stored in a cold, dry, dark place soon after they come off the tree. So trust your nose rather than a date generated by a robot.

Another piece of information you might want to cast a critical eye on is the calorie count on the nutrition panel. All of the full-size apples in one brand claimed to have a very precise 71 calories, even though they were all different varieties with different levels of sweetness.

There are 68 varieties of Irish apple, according to Heritage Apples of Ireland by Dr Michael Hennerty, former head of University College Dublin’s horticulture department.

Anyone with a little space should try growing a small tree, if not an orchard. It might set the scene for future windfalls.

Bloom to Zoom: the garden fest is online this weekend with chats and tips
6