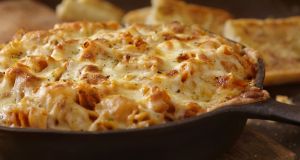 As the autumn starts to make an appearance, treat yourself and lean in to the warm, fuzzy feelings brought about by recreating the comfort food you associate with happy times. Photograph: iStock

When you think of your childhood, are there foods you associate with that time of your life? What’s your earliest food memory? Are there any foods that take on a special meaning, and perhaps even a better taste, when they’re served with a side order of nostalgia?

Take Cidona, for example. This apple-based soft drink has been a part of Irish culture since Bulmers started producing it in 1955. For many, Cidona evokes the same emotional response as the magic of Italia ’90, or crisp sandwiches eaten in the rain. As an adult, taking a sip of cold Cidona in the peak of an Irish summer can bring back a flood of memories.

Why does taste have this power to flood us with memories? Speaking to Huffington Post, psychologist and neuroscientist Hadley Bergstrom explains that “taste memories tend to be the strongest associative memories that you can make” and that this is partially because of a survival mechanism called conditioned taste aversion.

Put simply, conditioned taste aversion is what happens when you develop a strong avoidance to an ingredient or dish because of a negative experience such as being made ill. “With conditioned taste aversion, the effect of the sickness is so profound that even though you get sick hours after you’ve eaten the food, you’ll still make these extremely strong memories about what food you ate and where you ate the food,” says Bergstrom.

The power behind these protective negative associations can also be directed towards positive associations. There are many theories around comfort foods and why we crave them, and it’s often the context as well as the food itself that makes these food experiences so significant.

“Comfort food seems to be something people associate very significantly with close relationships,” says Jordan Troisi, assistant professor of psychology at The University of The South, in a piece for Time Magazine called The Science of Why You Crave Comfort Food. “This probably comes about by individuals coming to associate a particular food item with members of their family, social gatherings, and people taking care of them, which is why we see a lot of comfort foods [that are] traditional meals or things had at a party.”

So, arguably nostalgia does make food taste better. As the autumn starts to make an appearance, treat yourself and lean in to the warm, fuzzy feelings brought about by recreating the comfort food you associate with happy times.