Behind the scenes at Krispy Kreme Dublin, the firm’s most profitable shop worldwide

I count five layers of sugary decoration. There are 300 to 400 calories in a decorated shell 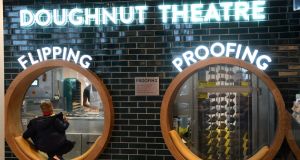 The only Krispy Kreme doughnut shop in Ireland opened just over a year ago, on September 26th, 2018. Lore has it that 300 people queued before the doors opened. The company needed security to manage the queues of cars at the 24-hour drive-through. Residents complained about the racket from beeping cars in the middle of the night, and the media (The Irish Times included) reported on the madness.

This week Krispy Kreme reported that its Dublin doughnut shop had 600,000 customers and sold about 6.6 million doughnuts in its first year, which averages 18,132 buns per day, indicating some calming down after the initial flurry. It still seems a massive number to make and sell daily in one shop.

So it’s off to Blanchardstown to try to solve the Krispy Kreme conundrum: why would the Irish shop of an international doughnut chain be its most successful?

Manager Des Naidoo has worked with Krispy Kreme for 10 years, mainly in south-west London, and moved here to set up the Irish shop. Things have quietened and demand levelled off since the madness of those first few weeks, but footfall is about 8,000 a week, he says. They’ve been “blown away by the interest from the Irish consumer”, he says.

Production manager Tim Carley takes one of the hot Original Glazed buns off the line for me – it’s seductively melt-in-the-mouth. Naidoo calls it “an oh-my-god-moment of melt-in-the-mouth fluffy goodness”.

The shop is now open from 7am to midnight, and they’ve carefully restarted the 24-hour drive-through, which ceased after the complaints last year. The 200-300 middle-of-the-night customers have dwindled to maybe 10.

In the morning, office workers and some teachers drop by on the way to work for dozen-boxes to treat colleagues. The 16- 24 year-olds are their strongest customer base, often midweek after school. What’s the attraction? “The cool factor. It’s an unusual shop, a nice place to hang out, with music,” on their “bleacher” seating, reckons Naidoo.

He brings me on a tour backstage but doesn’t want a camera behind the counter. I assume this is for hygiene reasons, but am told it’s because they don’t want their equipment photographed.

A number of things are closely guarded in Krispy Kreme. First there’s the dough mix, a cream-coloured floury mixture which comes into Ireland readymade in large bags. None of the staff even know what’s in the secret mix, which hasn’t changed in years they say.

Neil Skittlethorpe, who also moved here from Krispy Kreme UK before the opening, is mixing it with water and yeast in a large machine. Aside from flour, what does he reckon is in it? “Sugar,” he volunteers. It’s a sweet dough. There’s also dried egg.

The Krispy Kreme website doesn’t list ingredients in full, though it does carry some product information and an elaborate table of nutrition and allergens. Krispy Kreme uses palm oil, but says it is “fully Supply Chain Certified sustainable”.

It’s Monday afternoon when I visit, and quiet in the shop. Friday into Saturday is the busiest time, says Naidoo. All the same, they make and sell about 10,000 doughnuts on a Monday, rising to 17,000 or 20,000 daily on their busiest days. “Original Glazed” – or “OGs” – make up about a third of those.

They make and decorate doughnuts at intervals throughout the day, and production is very flexible to adapt to fluctuating demand. They sell them all in the single store (delivery services account for very few).

For all the doughnuts they make a day in the Blanchardstown shop, the space seems compact. It’s a smooth, streamlined, pristine set-up. After the dough is mixed by the machine Skittlethorpe is scooping it into a stainless steel vat, maybe 20cm x 50cm. Amazingly, this will make about 40 dozen doughnuts.

Dean Murphy is putting the dough into an extruding machine (this is unique and top secret too, I’m told) which deposits it in small uniform discs about 4cm wide, onto revolving trays, which double as weighing scales. These are “shells’ rather than rings. The trays swirl around in dry heat in a glass-fronted proving machine for about 40 minutes, adding humidity. The buns swell and then exit into a long vat of 183-degree oil, where they swim along for a few minutes before the machine flips them to cook the other side. The OGs are coated by a spray of icing; others travel on, cooling as they mooch around the corner.

Ricardo picks them up one by one and impales them on a tube coming out of a large tub of apple fill. Splodge!, and on to the next one. Other varieties – they have 16, some changing all the time – need to cool more before decorating.

Decorating and finishing is by hand and labour-intensive. In the back room two finishers are decorating. One dips shells into brown Biscoff icing, adding crumbled Biscoff and white chocolate shards, for one of their most popular buns (Nutella and Kit Kat are other faves).

The other is trialling a “limited-edition” birthday bun for this weekend. This yellow and pink concoction is quite something: A ring doughnut is dipped into a container of pink candyfloss-flavoured icing, topped with yellow buttercream, drizzled with vanilla-flavoured frosting and finished with sprinkles and stars.

Those colours are probably more attractive for children than adults. I count five layers of sugary decoration including the basic OG glaze.

This is not healthy food; nobody is pretending they are low-calorie. “It’s an indulgent treat, not an everyday thing,” Naidoo stresses a few times, and is resistant when I ask about return visitors. The average Krispy Kreme customer visits about five times a year, he insists.

The most popular purchase is the dozen-box, and the top seller in Blanchardstown is the OG, at more than 2.3 million in 12 months (which Krispy Kreme equates to a line of OGs stretching from Dublin to Dundalk and back).

So head office is still pleased? “They are amazed with the continued interest from Dublin,” says Naidoo. “To say they’re happy is an understatement.”

So what makes Krispy Kreme so popular in Ireland? Is in not just another over-iced baked doughnut: calorific, sweet and ridiculously decorated?

No one really answers why they took off here. Possible factors include curiosity, fear of missing out, the exclusivity of a single store, and great marketing. Krispy Kreme also seemed to hit some sort of consumer zeitgeist. But does that explain it?

There is another possible explanation: price. While a chain such as Offbeat sells a dozen decorated buns for €24 or glazed for €18, Krispy Kreme’s equivalent are €17 and €13. If you buy both together it’s €25 – a considerable cut on the opposition. Sometimes things are simpler than they seem.