Muddlers Club, Belfast: One of the best city restaurants in Ireland

Review: The menu may have few words, but the food screams quality on a plate 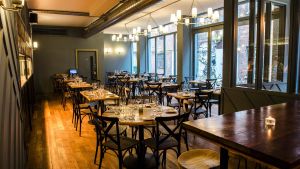 There’s a sharp-pointed star with a serpent eating its tail spray-painted on a wall, tattoo style, down an alleyway in Belfast. I don’t know if it’s the original artwork of the Muddlers Club, the secret society after which the chef Gareth McCaughey has named his restaurant.

But the restaurant sitting opposite this dark mark isn’t what I expected. It’s larger, bright and airy with wooden tables and a visible busy kitchen. It’s a look straight out of the industrial-chic bistro school of restaurant design. I don’t know why I thought it would be murkier; maybe because all the website shots feature night views, all eyes in pyramids and skulls artwork, the dial on the mood board set to skulduggerous.

We’re here for lunch in daylight, albeit the kind of grey half-light of a soft Belfast day. Any impression that we’re in bistroland, that cheerful but unambitious place, disappears very quickly when the food starts arriving.

It’s gone with the first snack (as the artist formerly known as the amuse bouche is now known). It’s some whipped chicken-liver pâté on brioche. So far so soft and fluffy. Except here it’s brioche turned to Melba, a crisp, thin version of this enriched French loaf with a perfect squiggle of aerated pâté topped with drizzles of cherry jam and shards of walnut. Wolfed in two gorgeous mouthfuls.

The menu is a terse list of bare bones words, not all of which make a thought bubble with “yum” appear over your head. What could be a real gulf in translation from page to plate turns into a joyful leap skilfully executed. So “seatrout, caesar, broccoli” is a small piece of fish tasting so deliciously of river and sea arranged on the elements of a Caesar salad in sauces and swirls. There’s broccoli made meatier and more savoury by being smoked, celeriac ribbons that are pickled and a green sauce that compresses all the flavour of a Caesar into one mellow silky flow, with an anchovy cream for the tang.

There’s a plum, white chocolate and coconut ice-cream dessert which brings everything to a lovely end

I have the crab bisque, sweet threads of the freshest crabmeat with nutty split peas, on the cusp of being mushy peas but never reaching that unpleasant mealy stage. There’s a disc of house pasta and a Parmesan cream to bring the sea and land together with a creamy finish.

As the plates get bigger the description becomes positively verbose (we go from three to four words). There are juicy rounds of lamb with samphire and aubergine as per its description. What it doesn’t mention are the splashes of vegetable colour, a sunny yellow carrot, charred baby leek, purple carrot with a orange innard like it can’t decide whether it’s a beet or a carrot. There’s a half a tiny white turnip so perfect it could have come straight out of Mr McGregor’s garden and a half an artichoke heart, pickled and soft. They’re all placed on the round white plate like artist’s brushes resting in splodges of paint.

The art here is in the tastes not the picture. No squeezy bottles have been deployed here, just spoons and care.

My courgette plate has the last of this year’s courgette flowers. They’re still attached to their offspring, the courgettes that swell out of their base like a balloon animal blown by the bellows of the pollinated flower. The collapsed yellow flowers are filled with nutty cubes of butter-fried courgette. There are strips of pickled and rounds of yellow courgette. There are crisp radish slices, dabs of lovage paste greener than a southern post box, and pillowy, buttery gnocchi with herbs sliced through them so there is green in every element.

Dotted through this lovely riff on the everyday courgette is the softest ricotta, which is more curd than cheese, like it was moments from being milk and only on its way to becoming a cheese.

There’s a plum, white chocolate and coconut ice-cream dessert which brings everything to a lovely end, along with a banana and dulce de leche.

Besides the 200-year-old secret society, there are layers of more recent Belfast history in the Muddlers Club. McCaughey came from Stephen Toman’s Michelin-starred kitchen at Ox to open his own place here. A line is being traced from Alain Passard’s Parisian restaurant Arpège through Ox to a back alley in Belfast where the Muddlers Club is hiding in plain sight.

No secrets. Just one of the city’s best restaurants.

Lunch for two with two desserts and two coffees came to €74.20