What’s really in your bag of frozen peas? 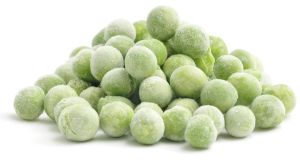 The processing means they are ready to cook so there is little to no waste. Photograph: iStock

Considering that they are inexpensive, convenient and healthy, frozen vegetables don’t get a lot of attention from food writers. They are, however, ideal for those times when time and money is tight.

Regardless of whether you are a mother on a schedule or a student on a budget, they can help to lift the quality of your meals. I’m not talking about the expensive little trays of petit pois with a knob of butter and a flick of mint to be found in the chilled aisle. I’m talking about the vast array of bags of vegetables in the freezer.

These often don’t have a list of ingredients because there is nothing inside except the vegetable itself. Take Lidl’s Deluxe petit pois. “Petit pois” simply means “little peas”, as these were picked before they reached maturity. The packet says that they were grown in “the lush fields” of Great Britain and are “frozen at peak of freshness”.

But what does that mean?

It goes on to explain they were “picked and frozen within 2½ hours”. That’s quick. It means they were harvested, washed to remove pesticides, soil and any micro-organisms. Then the ugly ones were knocked out. Finally, they were blanched in boiling water for a few minutes to kill lingering enzymes that could affect the colour, flavour or texture. Blanching can help to stop the loss of vitamins too, but it doesn’t cook the vegetables. They were then cooled with water and frozen quickly.

American inventor Clarence Birdseye, who started the company that became Birds Eye in the 1920s, is credited with introducing flash-freezing of seafood and then vegetables. He was in turn inspired by the Inuit he saw freezing fish during a trip to the Arctic. It is now a speedy, highly automated process.

Irish brand Green Isle notes on its packet of petit pois that the “goodness is locked in”, thanks to the quick processing. What it really means is that the process of degradation is halted, temporarily. (That’s not so catchy, though.) The shelf life of fresh peas is usually no more than a few days before the nutrients start to break down. The longer they sit on the shelves, the less they have to offer. Once the frozen ones are defrosted, the process starts up again.

Green Isle’s packaging also says, “Ireland’s favourite frozen veg”. The website explains that it is “the number one brand in frozen vegetables”, which is not the same thing as being the favourite. When it comes to peas, who could really tell the difference? It is heartening, though, that Green Isle was not involved in any way in the recall of frozen vegetables last year due to listeria.

The Lidl packet also notes that 80g counts as “one of your five a day”, referring to the Department of Health’s advice to eat five servings of fruit and vegetables a day. That’s just about half a cup, so it’s an easy way to get more greens into your diet. It’s worth looking at the nutrition information, too. There you will see that 100g of the little peas has 9.2g of carbohydrate, 5.6g of fibre and 6.7g of protein.

The Birds Eye petit pois have a similar profile, but the packet also says they are a “source of vitamin C and a rich source of protein, which makes them great for your immune system and for your muscles”. What’s true of one brand of peas is true of all the others as nothing has been added to any of them.

Finding the time and energy to buy, prepare and cook a full meal every day can be difficult. The processing means they are ready to cook so there is little to no waste. These vegetables are cheap, too, with a 1kg bag of frozen British peas from the Tesco brand costing just 64c. The long use-by date also means these can be kept on hand ready to go. Bags in the freezer section of shops now have use-by date of 2021, though they would probably be fine to use even after that.

Fresh, local, seasonal vegetables are always best, especially those that don’t involve single-use plastic. But having a bag of frozen peas, spinach or broccoli in the freezer to add to a curry or some good pasta sauce could just make the difference between simply staving off hunger and having a healthy meal with a good mix of carbohydrates, protein and fibre.

Mental health: How to mind yourself during the shut-down
9