Where can you get the best breakfast in Ireland?

Awards recognise the people providing the best start to the day, with two castles on the Wild Atlantic Way taking the top prizes 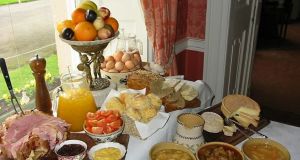 The champions of breakfast across Ireland have just been announced with two castles on the Wild Atlantic Way taking gold in the top tier categories, at an event celebrating the Cinderella of the culinary scene.

Ashford Castle in Cong, Co Mayo, was deemed to offer the best start to the day in the five-star category at the Georgina Campbell Irish Breakfast Awards 2018, in association with Fáilte Ireland, while Gregan’s Castle Hotel in Ballyvaughan, Co Clare won the gong in the four-star category.

The Irish Breakfast Awards were presented in each of the Fáilte Ireland accommodation categories with other categories including best brunch and best breakfast foods - covering meats, dairy, cereals, preserves and bread.

“It’s shaping up to be a great year for Irish hospitality and with accommodation bookings well up everywhere and eating out for breakfast and brunch now hugely popular,” Campbell said. “The quality of the Irish breakfast is playing a new part in showcasing the stellar standards of our food and hospitality industries.”

Campbell said the awards were shining a spotlight on a meal “that can only be described as the Cinderella of the Irish culinary scene” and pointed out that main aim of the awards was to link the best Irish food producers with those who prepare and serve food to the public.

“Whether it’s a nine-course Tasting Menu in a top restaurant or a homely breakfast in a B&B, quality ingredients are the foundation of any good meal,” she said. “These awards recognise the quality Irish breakfast foods that can lift this simple meal into an expression of the local land- and sea-scape and we want to see more of them on Irish breakfast menus.

“How often have you had a wonderful dinner in a hotel, only to be disappointed by breakfast? Our winners can inspire others to up their game and ultimately, we hope, lead to everyone being able to enjoy an authentic breakfast experience that reflects the locality,” she said.

The Greenhills Hotel Conference & Leisure Centre in Limerick won the top prize in the three-star hotel category, while the best breakfast to be found in an Irish country house was awarded to Longueville House in Mallow. The best guesthouse breakfast was in Hanora’s Cottage Country Guesthouse & Restaurant in Ballymacarbry, Co Waterford, while the winner in the B&B category was the Archways B&B, Rosslare, Co Wexford.

The best brunch in Ireland was found in the Firehouse Bakery & Café, Delgany, Co Wicklow. The best breakfast meats were found in Mayo in Kelly’s of Newport artisan butchers, while the Foods of Athenry won the prize for best cereals.

“While there is plenty of work to be done over the coming three years to ensure a consistently high standard of breakfast across the board in Ireland, this survey indicates an infectious enthusiasm for engagement which will no doubt inspire others to up their game - and perhaps be among the award winners next year” Campbell said.

“They say breakfast is the most important meal of the day and it’s certainly becoming a very important part of the visitor experience,” said the director of commercial development at Fáilte Ireland Paul Keeley.

“Quality experiences are now a major contributor to increasing holiday satisfaction, creating positive memories and driving positive word of mouth. Amongst those deciding on a holiday location, the expectation of good food is nearly as important as hospitality,” he said.

At the breakfast event (held at lunchtime) in the Intercontinental Hotel in Dublin, the results of the first annual Irish Breakfast Surveys conducted among accommodation providers to establish quality baselines and practices with which to measure improvements were also announced.

It found that a significant proportion of breakfast menus reflect where they are based, with 62 per cent of restaurants having at least three options and around half of those having at least five options that tell their local food story.

Sample menu descriptions provided include a lot of producer name-checking and descriptions such as ‘free range’, ‘organic’, ‘local’, ‘homegrown’ and ‘homemade.’

The selection process involves anonymous year-round assessment visits with the resulting reports fed through to the website, Ireland-guide.com.