Peak doughnut: When will the craving end? 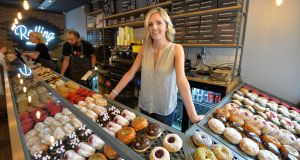 Pity the poor cupcake. It only seems like yesterday when it was an A-lister and getting invites to the best parties. But it hardly gets taken anywhere now. There are no queues outside cupcake shops, and people no longer bring cupcakes to work to lift colleagues’ spirits .

Doughnuts are to blame. They are everywhere. They are even on Ireland’s favourite fake news site. “Fresh reports coming into Waterford Whispers News detailing the news of yet another f**king donut shop opening up in the centre of Dublin City,” ran one story earlier this month.

“Not content with having just 4,978 donut shops, a pair of entrepreneurial business people have decided that yet another shop in which you can buy overpriced donuts and rubbish coffee is just what Dublin is crying out for.”

While the WWN folk are, perhaps, being a bit harsh about the quality of the coffee – and maybe even the prices – they are on the money when it comes to the proliferation of the doughnut shop, although their estimate of 4.978 is a bit wide of the mark.

Close to 20 dedicated doughnut shops have opened in Dublin alone in the last year or so, with others popping up across the State. Portland and Instagram are mostly to blame.

The Hipster capital of the US is where the trend for the tarted-up doughnut first emerged five or six years ago, and Instagram the platform that made Homer Simpson’s favourite treats cool.

Years ago, when sales of doughnuts were confined to supermarkets, old-school bakeries and the occasional festival van, they were considered by most people to be ugly lumps of greasy dough which were bad for the heart and worse for the waistline.

They were tasty for sure, but they sure weren’t pretty. Then everything changed. Doughnuts turned their backs on their humble roots and started dressing all fancy.

Instagram fell in love with them, and there are now in excess of 10 million separate photographs of the sugary treat on the social media platform. Imagine that – 10 million pictures of doughnuts. Tis far from Instagram the doughnut was reared.

Tis far from Portland too. When the Dutch first introduced the doughnut to New Amsterdam as it was known, they were called olykoeks (or oily cakes). Had they stayed oily cakes they most likely would never have taken off.

In the mid-19th century a New England ship captain’s mammy called Elizabeth Gregory deep-fried dough using nutmeg and cinnamon. She added nuts to the centre of the dough in case it wouldn’t cook all the way through. And so the doughnut was christened.

When your coworkers are saints and take a 5am flight back from Portland to bring these fresh beauties from @bluestardonuts. Happy Valentine's right?

we had to. donuts are our favorite! in fact, we often meet at Rocking Frog Cafe to chat about your events because we can't get enough of theirs!! 🍩🍩🍩 where should we try next?! #portlanddonuts 📷: @jengardnerphotography

Her son Hanson took credit for the hole. In an interview with the Boston Post at the turn of the last century, he said “the first doughnut hole ever seen by mortal eyes” was created with the top of a round tin pepper box. Why is still a matter of conjecture.

The first doughnut machine was invented in New York City in 1920 by a Russian chap called Adolph Levitt, and it started to take off. It got another boost in the 1930s when a Frenchman called Joe LeBeau fell on hard times in Kentucky and sold his secret recipe and his brand name, Krispy Kreme, to an opportunistic shop owner called Ishmael Armstrong. By the 1950s Krispy Kremes were all over the US, and were fighting with Dunkin Donuts for dominance.

Both names are still synonymous with doughnuts in the US, but neither has made a mark in Ireland, leaving the playing field free for local players – local players who are falling over themselves to respond to demand today.

The Rolling Donut has opened two shops in Dublin in little more than a year, and a third is on the way. But the Rolling Donut is no johnny come lately, and is probably the longest standing dedicated doughnut seller in the State.

When its founding father, Michael Quinlan, stared selling doughnuts from a clapped out old van at the Dandelion Market in 1978, he could scarcely have imagined that one day his as yet unborn daughter Lisa would open shops across Dublin carrying the name he conceived.

Doughnuts were a part-time gig for Quinlan at the start, but as the late 1970s became the late 1980s, and with jobs in Ireland hard to find, he secured a tiny kiosk on O’Connell Street and started selling doughnuts full time. Back then the Rolling Donut had three varieties – sugar, cinnamon and chocolate. It is a whole different world now, though.

“It does seem as if doughnuts have suddenly taken off in the last year or so, but I have been following the trend internationally for years, and it was always my ambition to expand the business,” says Lisa Quinlan.

It was a bit awkward when Aungier Danger set up, to be honest, but it gave me a bit more determination to expand what my family started”

She refers to Aungier Danger, Offbeat doughnuts “and a few others” who are competing for the same market, and expresses confidence “the best will survive and hopefully that will be us and maybe one or two others”.

She is certainly determined to succeed. That determination is fuelled not only by her family’s long doughnut history but because Aungier Danger, one of her main rivals, is run out of premises she used to operate a restaurant from by a man who used to be her boyfriend.

“It was a bit awkward when Aungier Danger set up, to be honest, but it gave me a bit more determination and drive to expand what my family started. It gave fuel to my fire, if you like.”

To say Quinlan was reared on doughnuts is scarcely an exaggeration. Her mother died when she was just 11 years old, so she and her sister Aimee were raised by their father – “Big Mick” she calls him.

“We went everywhere with him selling doughnuts. My dad is my best friend and my mentor. I think he is so proud and so happy with what’s happening now.”

And what is happening now is that the business is “absolutely flying”.

“Social media has been unbelievably important, and it has seen people from the United States and the United Kingdom coming in just because they have seen our doughnuts posted on Instagram or Facebook or Twitter. We also have some really good locations – on Bachelor’s Quay and South King Street. They are places I have had my eye on since I was 12 years old.”

It is all about balance, and the calorie content of a doughnut isn’t that high”

The Rolling Donut’s expansion is barely a year old, the same age as Offbeat Donuts. “We had our first birthday last month,” spokeswoman Jessica Pritzel says from an office above its largest outlet on Dublin’s George’s Quay.

It has three outlets already, with more set to open in the weeks ahead. She is cagey about exact locations, but if you wanted to bet a doughnut on the Dundrum Town Centre and Camden Street we reckon you’d be safe enough.

When asked to explain the sudden popularity of doughnuts, she suggests that the doughnut has become “more of an experience, a magical experience and a moment in a person’s day when they can take a break from work and take the day back for themselves”.

It might be a moment in time, but could it lead to a lifetime of waist expansion?

She has a quick response to obvious health questions. “Ah no, it is all about balance, and the calorie content of a doughnut isn’t that high, maybe between 200 and 300 calories.”

She pauses. “Well, some might be a little higher. But remember, for many people it is a weekly treat.”