The high-end Dublin grocery store is now selling crickets, mealworms and grasshoppers but as yet no customers have bitten

Conor Pope samples the crickets, mealworms and grasshoppers now on sale at the Fallon & Byrne food hall in Dublin. 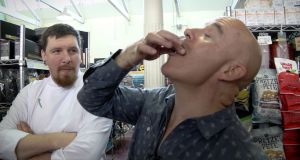 The grasshoppers, with their clearly visible but mercifully dead eyes and still wings, are the most terrifying of the insects which have just gone on sale in a Dublin food shop.

The crickets are not for the faint-hearted either mind you and the mealworms are just about okay as long as you don’t dwell too much on what you are chewing while you are chewing it.

At almost €11 for a small box, the edible bugs which appeared in high-end food retailer Fallon & Byrne earlier this week have not exactly been flying off the shelves.

But the buzz is growing and the novelty of the range, if nothing else, is sure to appeal to some people.
Particularly if those people have more money than sense.

Most of us associate the eating of insects with the ritualised humiliation of jungle-based celebrities you’d struggle to recognise if you bumped into them in Aldi and it was I’m a Celebrity Get Me Out of Here which lead to the birth of Jimini’s - the brand behind the bugs du jour.

The company was launched in 2012 by French entrepreneurs, Bastien and Clément who were inspired by the programme and quite fancied tasting insects themselves but reckoned they’d be better off adding a bit of flavouring.

It is said that every day is a school day so you might be happy to learn that aside from ‘disgusting’ the word most commonly used when talking about the eating of bugs is entomophagy.

By some - slighly unhinged - accounts, the insect trend is set to take the food world by storm - taking over from blue algae lattes and paleo-nonsense in the minds of the Hipster elite.

There are even some people who suggest that insects are going to be a mass produced food of the future and a more sustainable way of getting more nutrients into our diet.

Advocates point to the fact that there twice as much iron in crickets as in spinach and they have almost three times the protein as a chicken although we still can’t imagine ordering a Cricket Snackbox in Supermacs anytime soon.

We were unwilling to dine alone, so assembled a tasting team made up of shop staff (we were assured that none of our guinea pigs had been primed by store executives to say how lovely the new product line was) as well as one passing shopper from the Basque Country to taste the smoked onion BBQ flavoured crickets, the garlic & herb mealworms and the Greek spice grasshoppers, all of which cost €10.95.

Everyone was a little antsy as the taste test loomed.

First up were the meal worms. they were no more than a centimetre in length and thinner than a piece of twine. Light and airy, they exploded like little puffs of garlicky goodness when introduced to the mouth.

The crickets were a little more chewy although, thankfully what ever guts they once had had disappeared in the deep frying process. In terms of flavour and texture they were a bit like a Monster Munch, albeit a very, very expensive Monster Munch.

And then there was the grasshopper.

Its dead eyes looked mournfully at us as we brought it towards our mouth, as if it were judging us from the great jungle in the sky. The crunch of its wings as we bit into it was - we’re not going to lie here - gross. And it took far, far too long to chew the beastie, which was the size of a good-sized blue bottle.

But sight and texture aside, it actually tasted fine and - as with the rest - was more a vehicle for the spices (which were, in this instance, Greek) than anything else.
The bugs will probably sell - and if you fancy bringing a good conversation starter to a dinner party you could probably do worse - but there is no escaping the fact that, for delicate western sensibilities at least, the whole notion of eating insects is vile and the squeamish will always baulk at the notion.

Even if eating a deep fried bug is a lot less disgusting, when you think about it, than chowing down a prawn or a lobster.