Organic food: is it really worth the extra expense?

If we can’t taste the difference, and health benefits are unclear, why spend so much on it? 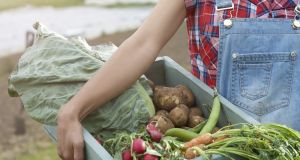 One Californian study found that children born to mothers with traces of organophosphate metabolites – a key element of many pesticides – during pregnancy had more ‘adverse mental development at two years of age, attention problems at three-and-a-half and five years, and poorer intellectual development at seven years’. Photograph: Getty Images

It is hard not to be well disposed to organic food and those who grow it. Small-time growers competing with huge multi-nationals who are free to use chemicals to produce food mountains on an industrial scale really do deserve recognition for their endlessly Quixotic struggles.

And - by any measure - organic food is more environmentally friendly than the alternatives. Growing fruit and vegetables and rearing livestock and producing milk without dumping rivers of toxic pesticides into the ground or lakes of antibiotics into animals has to be better for the world in which we live.

Only a fool would argue otherwise.

But while, on many levels, organic is demonstrably better, on others it is demonstrably worse – most notably on our wallets. Were someone living in Ireland to switch to an entirely organic shopping basket, they could quite easily add some €2,000 onto to their annual grocery spend and they might be left with nothing to show for it.

According to a study that appeared in a recent addition of the journal Food Quality and Preference, people can’t really tell the difference between organic and regular food in blind taste tests although when told a product is organic they suddenly start rating it higher.

This chimes perfectly with this writer’s own experience when comparing organic products with those produced using other methods and – with virtually no exceptions over more than a decade – we have never been unable to discern any taste differences between the foods produced conventionally and organically.

Bottom lines and taste tests and booming sales aside, what impact does organic food have on our health?

A somewhat dispiriting answer is perhaps none at all and it may be true that the impact organic food has on a person’s physical well being is dramatically overstated in some quarters – there are question marks as to whether eating organically makes much difference to our health at all.

One of the most exhaustive European studies examining the health benefits of organic food was carried out almost seven years ago at the London School of Hygiene and Tropical Medicine, acting at the behest of the British government’s Food Standards Agency.

It found that consumers were paying higher prices for organic food partly because they believed it had health benefits. But after carrying out a review of more than 160 scientific papers which had been published over 50 years, researchers found no significant difference when it came to consumer health.

“A small number of differences in nutrient content were found to exist between organically and conventionally produced foodstuffs, but these are unlikely to be of any public health relevance,” the report said. “Our review indicates that there is currently no evidence to support the selection of organically over conventionally produced foods on the basis of nutritional superiority.”

The report did not, as you might expect, go unchallenged with organic advocates pointing out that it did not take into account the health effects of pesticides and other contaminants found in some foods.

And it is the absence of pesticides which draws most consumers towards organic food.

The impact of pesticides were not excluded from a much more recent report – in fact they were at its core. A review of existing scientific evidence commissioned by the European Parliament and published earlier this year highlighted the dangers of pesticides.

MEPs wanted a simple question answered: Is organic food healthier than conventionally grown crops? Once again experts looked at existing research and told MEPS of one alarming Californian study which found that children born to mothers with traces of organophosphate metabolites – a key element of many pesticides – during pregnancy had more “adverse mental development at two years of age, attention problems at three-and-a-half and five years, and poorer intellectual development at seven years”.

Experts also raised concerns about pesticide regulation and stressed that while “a comprehensive risk assessment before market release” has to be carried out on all pesticides, “important gaps remain” and they said that because organic food has very low pesticide levels “potential risks to human health are largely avoided”.

“There are indications that organic crops have a lower cadmium content than conventional crops due to differences in fertiliser use and soil organic matter, an issue that is highly relevant to human health,”. Professor Ewa Rembialkowska, of Warsaw University said. “Organic milk has a higher content of beneficial omega-3 fatty acids compared to conventional milk, although we cannot currently derive any specific health benefit from this.”

Those last 10 words may well be the most telling in the entire report.