Review: A restaurant with notions as big as the bills

The room is glamorous, the plates look great, the service attentive – so why does it feel wrong? 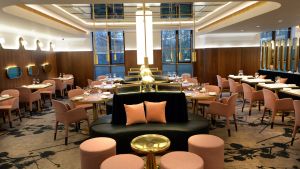 There’s a touch of Miss Piggy about the hype around Glovers Alley. “Wear socks sweetie,” she advised audiences recently, “because I’m gonna knock ‘em off”. Dublin’s new restaurant seems just as joyously uncoupled from its own modesty.

“Here’s something you don’t see every day. Or any day, in fact,” Glovers Alley website promises with the kind of swagger that makes the pig look bashful. But I’m always up for a dazzling. So is my friend. “I will frock up for the occasion,” she texts. We can’t get an evening table. So lunch it is.

Glovers Alley is in the Fitzwilliam Hotel in That Room where Kevin Thornton blazed his way to two Michelin stars, before finishing sadly with none. Since then, a barrel of money has been poured into That Room carving it up into three alleys with banquette seating in darkest kelly green and sugar pink upholstered chairs and cushions. Curved bronze framed mirrors on the partitions and ceiling give it all the glimmer of a very posh powder room.

There is a lot of ridged glass, the kind Philip Marlowe had in his office door to silhouette callers. These ridged glass panels are at eye level on the windows. So all you see of Stephen’s Green are treetops. They could be treetops anywhere.

We are seated in what we quickly dub Ladies Who Lunch Alley, down the middle of the room. Behind us, with their backs to the wall, is Movers and Shakers Alley. That’s entirely male. “I thought I was going to have to pay,” jokes one member of the party before “the man who’s paying” arrives.

White-knuckle moments are understandable at these prices. One of the cheapest options is to not turn up. That will cost you €50 each charged on the credit card used to secure an online booking. The tasting menu (for lunch) will set you back €195 each, with wines. Glovers Alley is harpooning for Monsieur Guilbaud’s whales, rather than trawling smaller fry. We’re going to see what the €45 three-course deal gets us.

Snacks first: a warm Parmesan gougére, with an oozing cheesy middle, then a dot of whipped up foie gras between two savoury tuiles and finally a slightly oily mushroom beignet under a damp toupé of grated truffle, which doesn’t taste of very much at all.

The starters look beautiful, but like a slow car crash, all eyes – well mine and one of the wait staff – light on the single hair on my plate. It’s nowhere near the food and a napkin swipe would have despatched it perfectly. But the world clicks into rewind and the two starters are disappeared off the table as swiftly as a screen swipe. “Leave the hair, change the food,” I should have called after them, Groucho Marx style.

When they return there’s nothing wrong with my celeriac with Belper Knolle, a very special Swiss cheese, shaved like slivers of truffle or silver birch bark. These melt nicely on the tongue. But eating Swiss cheese in a place where we have world-class cheesemakers feels puzzling. There’s a ribbon of deliciously pickled celeriac and a wedge of less delicious roasted celeriac, which hasn’t lost its bitter edge.

Anne’s beetroot (with yet more foie gras), is the best dish of the lunch; lovely pieces of beet turned to chewy sweets with fresh leaves, the flavours excellently judged. This is a kitchen that can do great things with vegetables, with a menu that is strikingly meat and fish heavy.

Next up, guinea fowl is served in four chunks around half a small Roscoff onion. The meat has that softness that comes with a sous vide simmer. The skin is flaccid and topped with diced green olives that bring a salty bitterness to the dish for no discernible reason. Across the table, a small hake fillet is oddly tasteless and rubbery, wrapped in a far tastier hispi cabbage leaf. The charred flower sprouts and silky baby leeks on the plate are the best bit of the dish.

Sadly my socks remain fully on. I want Glovers Alley to be great. Dublin’s high-end dining scene needs new blood and ambition and Michelin-starred chef Andy McFadden has brought a lot of talent together. The room is glamorous. The plates look great. The service is so attentive it feels vaguely stalker-ish.

But it all feels like it’s vibrating with stress rather than focusing on the food, creating the kinds of flavours that make you forget the room and close your eyes to better commune with what’s going on in your mouth. If Glovers Alley was a person I’d send it on a yoga retreat or at least to a dark room to calm the heck down for a few hours.

The anonymous treetops say it all. Glovers Alley is missing a sense of place. You could be anywhere on Planet Money eating fine-dining tropes from the Michelin playbook. True tastes of here and now would be properly worth bragging about. Let’s wait in hope for that to happen.

Lunch for two with sparkling and still water came to €96.