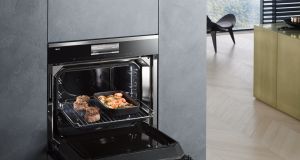 The Miele Dialog oven is programmed to understand the energy inside the food and it then “measures and controls and regulates the cooking process”, depending on what it is it is cooking, to deliver perfect food all the time.

I refuse to clap for a cooker. As the hundreds of people flown in from all over the world to this swanky art gallery in Berlin applaud a procession of fancy dishes cooked by Miele’s new Dialog oven using a combination of artificial intelligence, electromagnetic waves and wizardry, I fold my arms and look bored.

Truth be told, I am not bored. I am very impressed by this cooker’s tricks and instantly convinced that – one day – the technology on display will be in every home in Ireland and will radically change how and what we cook.

But I am still not going to applaud a machine. I will have to when the robots rise up and wrest control of our world from human hands but we’re not there. Yet.

Surrounded by happy clappers, I try my best to understand what the Dialog is doing. I have seen it use its skills to cook a fillet of salmon to perfection despite the fact the fish was encased in a block of ice when it went into the oven.

Now that may not sound remarkable but it might when I say the Dialog was able to heat and cook the fish without melting the ice.

It was also able to cook a beef fillet to medium rare while at the same time crisping up the Parma ham in which the fillet was encased and cooking the vegetables sitting in the same tray just as they are supposed to be cooked.

It is no bother to this oven to cook four or five things in four or five different ways at the same time because – as the man from Miele says – the company is using an “application of technology in the field of cooking that is absolutely revolutionary and allows for completely new cooking experience”.

Normally when I hear such phrases, I roll my eyes to the heavens and dismiss it as PR guff, but not today because the proof of the pudding is always in the eating and I am eating the pudding.

Dr Markus Miele, the chief executive of the company which bears his family name, tells the crowd of food writers, chefs and me that his new cooker can do all the things it does because it has a conversation with your food when the two first meet.

He explains the oven is not called Dialog because it talks to you but because it talks to your food. And how does it do that? It is programmed to understand the energy inside the food and it then “measures and controls and regulates the cooking process”, depending on what it is it is cooking, to deliver perfect food all the time.

It is a big step along the road of making cooking high-end food effortless for even the most skill-challenged chef among us. No wonder the professional cook at my table is looking worried.

It turns slow-roast pork into fast-roast pork while still delivering the same taste and texture and delivers a shoulder of lamb that is falling off the bone in about a third of the time it takes your suddenly slow cooker .

As dry ice swirls around the gallery and disco lights flicker, Dr Miele describes his new oven as a “game-changer” and hails it as the biggest innovation in the history of cooking since we discovered fire.

“A hammer is a good tool if you have a nail but sometimes you need to tighten a screw as well,” he says. “For the past 1.5 million years we have poked food with a hammer. Now you have not just a hammer but a whole toolbox.”

And how does the Miele tool box work?

It sounds simple written down – the Dialog has antennae which emits electromagnetic waves at specific frequencies and calculates in real time how much energy has already been sent out and how much of that energy has been absorbed by whatever it is cooking and then it adjusts itself accordingly.

While that sounds simple written down, the technology behind it is incredibly impressive and it has taken years to perfect, which is why the good doctor is so excited by it all. He and his company appear to have won a race that many of the leading appliance makers in the world have been taking part in for years.

The cooker does sound a bit like a regular microwave oven, which is why the Miele people do a side-by-side comparison between the new and the old.

We are shown two frozen cakes, one of which was defrosted in a microwave and the other in a Dialog. Surprise, surprise, the microwave delivers a soupy mess of creamy goodness while the cake that comes out of the Dialog is a perfectly formed slice of creamy goodness.

The smart oven can be controlled through an app on your smart phone and can be pre-programmed with certain dishes. It will also remember how to cook certain things. And it will be able to communicate directly with your phone and work out how best to cook certain recipes. All it won’t do is unshackle itself from your kitchen wall and do your shopping.

The drones will take care of that though.

The Dialog is only tentatively taking its first steps into our world and will not be available in Germany until next year, after which it will be rolled our across Europe.

The bad news is that should you choose to be an early adapter, you’ll not have much change out of eight grand but as with all such things, the price will fall and fall as the technology becomes more commonplace and before you know it we’ll all be cooking like Gordon Ramsay, without the swearing.

The even worse news is that if you do get such a device you’ll not be able to boast about it at dinner parties because to do so would be to reveal it is your cooker and not you who deserves all the credit for the wonders you dish up. And who, in their right mind, is going to do that!

Other ways the kitchens of the near future will change

An app for that: in the kitchen of tomorrow we will control all our devices from our phones and the internet of things will ensure our kitchen is constantly connected and all the devices will talk to each other and to the outside world to make sure we have everything we need.

Screen time: our fridges will have screens which itemise the contents within and carry details of the nutritional info we need. The screens will alert us when certain things are approaching their use-by dates. Work tops will have screens embedded in them to help us follow recipes without running the risk of dropping our phones in the soup.

Lighting up/living in: the way your kitchen is illuminated and designed will be transformed. Miele has discussed the concept of the “invisible kitchen” – a room with built-units which are accessible when in use and then made to virtually disappear when you are done with them. Lighting is also being re-shaped to allow for brighter, more targeted lighting when it is needed and more subtle tones when the cooking is done.

Weigh to go: how would you like your weighing scales – or your body analyser as we will call it – to measure your weight, body fat and BMI and pass the info on to your fridge so it can decide how many calories you should consume today. The decision will be based not only on what you have in the fridge but on how active you have been. On good days, this will be great. On Christmas Day, it will be a nightmare.

This is focaccia, but not just any focaccia
Real news has value SUBSCRIBE