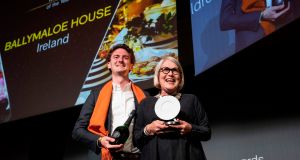 JR Ryall and Darina Allen of Ballymaloe House restaurant, which won the Trolley of the Year award at the World Restaurant Awards in Paris. Photograph: Thomas Samson / AFP

Echoing last year’s Michelin awards, last night’s Irish wins at the inaugural World Restaurant Awards in Paris were all about Cork, with east Cork’s Ballymaloe House and Dennis Cotter of Café Paradiso in Cork city winning two of the categories.

The World Restaurant Awards 2019 winners represent 10 countries across four continents, with the geographical range of the awards setting an inclusive tone in their first year.

The awards were given out in 18 categories, with 12 ‘Big Plates’ awarded with a view to recognising excellence and integrity, while also trying to better promote gender balance and the diversity of restaurant culture and community. The six more lighthearted tongue in cheek ‘Small Plates’ awards (including Tattoo-free Chef “For toque stars whose bodies aren’t canvases”, and Trolley of the Year “For those that believe table-side service should always be in fashion”) made a point of acknowledging the pivotal role of social media, while also championing culinary tradition.

The World Restaurant Awards categories, some of which seemed odd when announced last year, made a lot more sense on the night, especially when you heard the stories behind some of the winners, such as South Africa’s Wolfgat in Paternoster, a 130-year-old oceanside cottage with a menu specialising in local seafood and plants foraged from the Western Cape and a democratic kitchen structure, which won two awards, Big Plates for ‘Off-Map Destination’ and overall ‘Restaurant of the Year’.

Café Paradiso, one of Ireland’s best-known vegetarian restaurants, won the Big Plate ‘Collaboration of the Year’ award for its chef-farmer collaboration with Gort na Nain vegetable farm, a partnership with remarkable longevity, spanning two decades. Denis Cotter accepted the simple white plate trophy with words familiar to any Irish sporting fan (“Tá an-áthas orm an pláta seo a glacadh...”) and also said when accepting the award that “This is an extraordinary honour for something that we have been working on for 20 years.”

Denis and Ultan trying to hide their excitement on arriving @worldrestawards in Paris pic.twitter.com/r1YDYbYuw1

Ballymaloe House won the first ever Small Plate ‘Trolley of the Year’ award for its famous dessert trolley, and pastry chef and Ballymaloe House’s custodian of the dessert trolley for the last 10 years, JR Ryall, flew back from an extended trip to Mexico for a couple of days to accept the award.

He was joined on stage by Darina Allen and they dedicated the award to the memory of Myrtle Allen who was also recognised later in proceedings alongside Anthony Bourdain, Pulitzer-prize winning writer Jonathan Gold and France’s seminal chef Paul Bocuse and others that have been lost by the food world recently.

The original wooden cart at Ballymaloe House was made in the early 1960s by carpenter Danny Power to Myrtle Allen’s specifications - a top shelf with a ledge and another underneath for plates and serving utensils.That sense of carrying on a history and tradition and the theatre of tableside service is part of the reason Ballymaloe House won the award.

Reacting to the win, Ryall told The Irish Times, “I feel more proud than ever to be from Cork. I have always felt at home in Ballymaloe and over the 15 years I’ve been there I have always been confident in the simple food we serve.”

Asked what he would say to the next custodian of the famous Ballymaloe House trolley, he said: “Enjoy using the exceptional produce we have at our fingertips in east Cork. Taste everything as you prepare it. Have confidence in serving it.” He also made a point of inviting everyone in the hundreds-strong audience to visit Cork from the stage.

On a beautiful spring evening in Paris in the impressive Palais Brongniart, the former stock exchange was filled with many of the food world’s old guard along with the new wave of contemporary chefs and culinary influencers. Some of the most influential chefs in the world like Helene Darroze, Ana Ros, Clare Smyth, Alain Ducasse and Alain Passard were there. The awards ceremony itself was mercifully short – something that one or two events in Ireland could consider. It was also distinctly light-hearted, hosted by the French TV star, familiar to Ireland from the 1990s TV show Eurotrash, Antoine de Caunes.

The co-creator and creative director of these new World Restaurant Awards is Joe Warwick, also the man originally behind the World’s 50 Best, the awards that, aside from Michelin, had dominated the international restaurant world since their inception in 2005 and until recently.

The World’s 50 Best has been heavily criticised in recent years though for a lack of transparency and gender balance in its judging and essentially being a boys’ club. This year, it has made some significant changes to its judging – for the first time, the judges are a 50/50 male/female split – and it has also removed the ability of previous winners to be named number one in the world again. However, it retains the Best Female Chef award, seen by many as a patronising and unnecessary division.

The World Restaurant Awards are the first international restaurant awards to implement a gender-balanced judging panel and inspection teams, and winners were decided by a 100-strong judging panel made up of restaurant journalists, influencers and culinary professionals from 37 different countries.