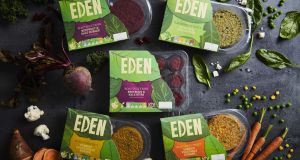 Veganuary might be over, but veganism as a lifestyle choice and a diet isn’t going anywhere. Emirates airlines noted a 40 per cent increase in requests for vegan meals last month, serving more than 20,000 of them on its flights from Dublin.

Hospitality outlets are responding to demand by offering vegan choices on menus, such as Holly White’s collaboration at the Merrion Hotel. Last week, Wagamama launched its vegan menu, with four starters and seven main courses, and there is now a complete vegan dinner menu on offer at 10 Fleet Street restaurant at The Morgan Hotel in Dublin 2.

Supermarkets are responding to an upsurge in interest too, increasing their vegan-friendly product ranges. New to chilled-food cabinets are the Eden brand of sustainably sourced burgers and bites. Eden is owned by sausage and pudding manufacturers Loughnane’s of Galway, and the vegan products are made in Birr, Co Offaly.

The burgers come in four varieties – beetroot and kale (also available in bite-sized portions), garden vegetable, curried cauliflower and spinach and feta. They are steamed rather than fried in the production process, and can be finished at home by grilling or baking. They cost €3 for a pack of two and are on sale at Tesco, Dunnes, SuperValu, as well as independent outlets.

Adam and Janya Lyons met in Sydney, when they were both living there, and it was “love at first green curry and blood noodle soup”, Adam says. Janya is originally from Bangkok, where her family has been in the food business for generations.

They decided in 2001 to come to Ireland “and cook Thai food, our way”. Together they opened Kin Khao Thai restaurant in Athlone, and earlier this year they added a second outlet, in Maynooth, Co Kildare.

Both restaurants have the same name, but Adam says the menu in Maynooth features more dishes from the northeasterly region of Isan. “It is the poorest province in Thailand, yet it is the most exciting in what it offers in the flavours and dishes found there. It’s what Anthony Bourdain and Andy Ricker have been proselytising about for years,” he says.

Head chef in Maynooth is Tatawat Rattanachareon, known as Chef Tong, who previously worked at Kiin Kiin, a Thai restaurant in Copenhagen with a Michelin star, where he was sous chef.

“In Maynooth, we are doing a lot of cooking over coals, and what a difference it makes,” Adam says. His role in the business is in administration – “and getting in the way on the floor” – while Janya looks after the kitchen, and menu ideas.

Kin Khao Thai is at 15 Greenfield Centre, Straffan Road, Maynooth, and is open for dinner from 5pm every day except Tuesday and for lunch Friday to Sunday.

Japanese afternoon tea, at least as interpreted by the gin company Beefeater and served at its Table 24 installation at House, in Dublin 2, isn’t a traditional scones and cake affair. Instead you’ll begin with a palate cleansing sencha tea, then go on to miso soup, sushi rolls, and a selection of teriyaki chicken and gyoza, followed by chocolate and fruit desserts. There’s gin and tonic, too, of course included in the €65 per person fee. Bookings, for up to eight people (with no minimum booking), can be made by telephoning 01-9059090.

Chef Tom Kerridge is an engaging personality on TV, and his 76kg (12-stone) weight loss over four years helped make his diet books bestsellers, with Tom Kerridge’s Dopamine Diet and Lose Weight for Good selling more than a million copies combined. He is back again with another healthy eating book, Tom Kerridge’s Fresh Start (Bloomsbury, £26), in which he helps readers to cook from scratch and avoid convenience food and takeaways. Eat better, feel better is the message, with 100 new recipes to support the good intentions.