What is really in jelly beans?

Read the label: They’re short and sweet but a jelly bean has a long list of ingredients 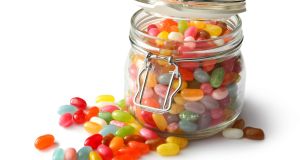 Jumping jelly beans - so many ingredients

Jelly beans sound like something from a magical fairy story in which a clever child outwits a wealthy ogre. In Jack and the Beanstalk, the young lad eventually wins out. I’m not so sure that’s the case with modern jelly beans.

Despite their myriad colours and vivid packaging, I imagined one bean would be much like the other. Wrong. Obviously they all have a lot of sugar, at about 60-70 per cent. Naturally, they have flavourings. But some packets also come with a warning that they “may have an adverse effect on activity and attention in children”.

The expensive Bean Boozled Jelly Beans Candy, made by US brand Jelly Belly, have those exact words. To be fair, the front of the packet has none of the usual marketing speak, it says: “Caution. Contains weird and wild flavours”. Some of those include buttered popcorn, which apparently was America’s favourite last year, as well as rotten egg and stinky socks. Ugh. It’s not the flavours you need to watch out for, however, it’s the ingredients.

These are all made from coal tar or petroleum and have been associated with hyperactivity in children, according to Safefood, an Irish organisation that promotes nutrition awareness. These colours are not banned, but the European Food Safety Authority has recommended a safe level of consumption and warning signs on packaging. There are lots of lovely ingredients too, such as pear juice concentrate, lime juice, chocolate and coconut, but it’s hard to look past the warning.

A packet of jelly beans from the Co Westmeath-based Athlone Sweets has a similar warning. It says “E102, E104, E122 and E110 may have an adverse effect on activity and attention in children”. So that’s three yellow dyes and one red, E122.

It also warns that the jelly beans were packed in a factory where nuts and sesame seeds are handled. So these are not for handing around blithely given that genuine allergies can cause serious problems. That’s hardly what you want to read on the back of packaging.

Other brands do better on flavours. The Jelly Bean Factory, which is based in Dublin, highlights on the front of its products that it uses “100 per cent natural flavours”, which sounds lovely. It uses colours that come from fruits and vegetables and include anthocyanins, which can come from plums or apples; vegetable carbon, which is black; lutein and carotenes, which are orange and chlorophyll, which is green.

Those are not all the colours used, however, as the Jelly Bean Factory also uses titanium dioxide to achieve a bright white and copper complexes of chlorophyllins as a green. Titanium dioxide is somewhat controversial as the International Agency for Research on Cancer has deemed it “possibly carcinogenic” to humans. The European Food Safety Authority decided last year, however, not to re-evaluate its position on it as a food additive. So it is up to the consumer to decide. Copper complexes of chlorophyllins may sound scary but seem to have no known side effects.

What gives jelly beans their shine are the glazing agents. Athlone Sweets, the Jelly Bean Factory and many other manufacturers use shellac, carnauba wax and beeswax. Shellac is made using the excretions of an insect commonly found in India and Thailand. It is collected from the trees and made into a kind of resin. Don’t let that put you off as it is clear, tasteless and odourless. Carnauba wax is from the leaves of a palm tree. Beeswax is exactly what it sounds like.

One brand that uses no artificial colours is Haribo, which explains why the jelly beans come in a simpler range of colours. They are also suitable for vegetarians as they have no gelatine.

Jelly beans seem so innocent as sweets, but it is really important to read the label. You never know what you might find there.

Returning from Australia, I barely recognise my hometown
10

Life is busy. This can be difficult for a new vegetarian such as me
Real news has value SUBSCRIBE