What is really in ready-made curry sauce?

Branded ‘sauces’ offer convenience, but are often loaded with sugar and poor value for money 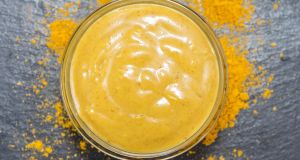 It was the billboard that did it. Beside a supermarket in leafy Dublin 6 there stood an advertisement for what appeared to be a satanic cult. Monks in hooded blood-red robes surrounded a mysterious leader. Had the world gone mad? How could these sinister figures be so blatant?

Things aren’t always what they seem, however. It was just a teaser sign for curry sauce made by McDonnells, an Irish food company in Co Meath. But what is this curry sauce of which it is so proud?

For starters, the name is confusing. What McDonnells and other manufacturers call curry sauce is really a “curry sauce powder mix”. As the picture on the front of the packet shows, it’s meant to be used to make the type of sauce that goes on curry chips or acts as a base for chicken curry.

A basic homemade curry sauce has onion, garlic, ginger and spices. It is cooked in oil or clarified butter and can be thickened with flour. It’s a simple process that requires knowing which spices you like from a long list of possibilities. The powder in the tub from McDonnells delivers convenience, though it is expensive given how much of it is flour and sugar.

So what can we tell from the label?

There is a good mix of spices, which adds plenty of flavour, but there is also a lot of sugar and maltodextrin, another form of sugar.

McDonnells adds flavourings, which we know are from plant sources as the product has a vegetarian symbol. Celery is mentioned as it is one of the common allergens, but the others could be almost anything. It also includes flavour enhancers in the form of monosodium glutamate and sodium5’ – ribonucleotides. These are often used together in processed foods such as soup or stock as they work well in combination to boost the appealing taste that the Japanese call umami, which means a yummy savoury taste rather than sweet, sour, bitter or salty. The packet says the recipe was developed in Drogheda in the 1980s and that seems about right.

Lidl’s Kania brand curry sauce comes in a red cylinder that looks very similar to McDonnells. It boasts that it has “no artificial preservatives or colours”, but don’t be fooled into thinking that means it is particularly healthy. Sugar, which is not an artificial nutrient, is the first item on the list of ingredients, which means there is more sugar than anything else in this mix. That was shocking. It also has glucose, which is sugar. Rice flour and modified potato starch are used instead of wheat, hence it is gluten free, proving once again that gluten free isn’t necessarily better.

Lidl’s sauce lists its flavour enhancers as monosodium glutamate, disodium inosinate, and disodium guanylate, which have a similar effect to those in the McDonnells sauce.

The sauce is 17 per cent curry powder (coriander, cumin, turmeric, paprika, cassia, garlic, onion, mustard seed, ginger, cloves, fenugreek, cardamom, chilli, black pepper), which is high. Then it also has flavourings, stabilisers xanthan gum and guar gum, and acidity regulators. So there is a good mix of spices, but a lot of sugar, additives and processing aids.

It is produced in Ireland, which means there is a factory somewhere on the island putting all the ingredients into a cardboard tube stamped with the Lidl brand.

Aldi’s Harvest Kitchen sauce also comes in a red tub, and is vegetarian, free of gluten, and produced in Ireland. It has a remarkably similar list of ingredients, with sugar getting first place and dried glucose syrup, which is also sugar, listed lower down. In place of the flavour enhancers, it has yeast extract.

Tesco is so happy its product has no monosodium glutamate it has put the message “no MSG” on the front of the packet. The European Food Safety Authority established a safe intake level for glutamates used as food additives in 2017 after re-evaluating their safety, but some people still believe MSG gives them headaches.

These mixes are expensive for what they are, which is mostly flour or sugar, spices and lots of additives. Get some curry powder and a few onions and you can conjure up your own additive-free savoury sorcery.

It should be a lot cheaper too.

Hanging up my fork: My final three meals as Irish Times restaurant critic
6