Jess Murphy: Growing up I loved watching Keith Floyd's indulgent cooking. He would have liked this show-stopper 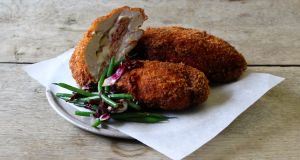 I had three favourite TV shows as a kid. First, there was The Love Boat. I had a crush on Isaac and loved his ability to solve everyone’s problems over a fruity cocktail in the sun. Next was The A-Team. I always fancied myself to be a bit like John “Hannibal” Smith (“I love it when a plan comes together”).

Last but not least was anything featuring the wonderfully entertaining Keith Floyd. He was your go-to guy for cooking and travel.

No one made food programmes like he did. Much like in Ireland at the time, we had only two TV channels in New Zealand, imaginatively named Channel 1 and Channel 2.

I acted as the family remote control, as if they hadn’t been invented yet, and for us VHS was nothing more than a pipe dream.

Floyd was the first guy to introduce us to Basque cuisine, the Mediterranean, proper French cooking such as bouillabaisse and, of course, wine. He hated the word “jus”, and rightly so, I like to pronounce it “gravy”. He was a fan of indulgent show-stoppers. And so am I.

One of the great show-stoppers I like to make at home is chicken cordon bleu. You have to do this with proper pasture-reared chicken and thick-cut ham. Not forgetting a generous amount of Coolea cheese made on the mountain farm by the Willems family in west Cork since 1979.

Just the words “cordon bleu” conjure up a certain  attitude. When we make this dish, the wine decanter gets dusted off, candles are lit and glasses polished. We chill Highbank Drivers Cider and the Spanx go on. It’s pretty much a Galway version of Come Dine with Me, and it rocks.

You need to go to a deli for this ham: no sweaty packets are allowed. If you don’t have access to Coolea cheese, any good sharp mature Cheddar will dig you out of the hole.

Method
Slice your chicken breasts in half lengthways but not all the way through – like opening a page of a book, leaving a little hinge.

Put the breasts in between two sheets of parchment and give them a good whack with a rolling pin or heavy saucepan to flatten them out.

Place a slice of ham and 75g of cheese in the middle of each and fold over. Press down firmly and and rest in the fridge for an hour.

While the chicken is resting, get your crumbing station together. Flour and seasoning goes in one bowl, eggs beaten with milk in another, and then the bread crumbs in the third. Take your chicken out of the fridge and dip in the flour, making sure you have even coverage. Then coat in the egg mix and lastly the bread crumbs making sure you are leaving no gaps.

Heat the oil in a wide frying pan and shallow fry the breaded chicken until golden brown on both sides. Pop it in a pre-warmed oven for 10 mins at 180 degrees to make sure they are cooked through and the cheese is melty in the middle.

Endive comes from the bitter end of the salad vegetable spectrum, but you can sweeten it up with some fruit and this dressing.

Method
Put your cider vinegar, condensed milk and mustard powder in a jam jar with a tight fitting lid and shake to the high heavens. Don’t worry if it looks split in the jar, it will be fine when poured over the salad.

Cut the grapes in half, thinly slice the apple and fennel, we use a mandolin grater (mind your fingers), and then chop the endive or separate into leaves if you want it to look pretty. If you are a fan of the wedge salad, you can cut it into quarters.

Put all the elements on a serving plate and drizzle the dressing from the jar on top.

Yes, it’s good for you. Yes, it has loads of health-giving benefits. But seriously – blah blah blah – broccoli can be so boring. Not if you do it this way and put a bit of zing in it. You will definitely be wondering why you didn’t like broccoli before.

Method
First steam the broccoli to your liking – ideally until there is still a bite.

Then in a big smoking-hot frying pan, throw in the drained broccoli with the Korean pepper flakes, sesame oil and lemon juice.

Plate it up on a large serving dish and sprinkle with the hazelnuts and nori flakes.

Some get up early to go to the gym, others because they slept in a doorway
2

TikTok boom: The app exploding in popularity among Irish teenagers
4