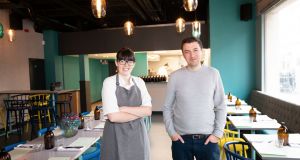 A former Spar shop on Pearse Street in Dublin 2 opens today (Tuesday) as Gertrude, a 65-seater cafe restaurant with a global influenced all-day menu firmly pitched at the affordable end of the market, and a strong social space ethos.

It ithe fifth – and the biggest – coffee, food and now wine offering from Colin Harmon, joining the two branches of 3fe on Grand Canal Street and Mespil Road, Five Points in Harolds Cross and Daniel on Clanbrassil Street.

“I spend a lot of time travelling, and a lot of cities you go to there is an evolution of cafes that have become social spaces and are now running into the evenings, with really good food and really good wine,” Harmon says.

He envisages the space being as accessible as possible and appealing to a clientele drawn primarily from the tech companies located nearby, including Twitter, Facebook and Google.

“We want people to be able to drift in ... somewhere you don’t feel like you’re going out, but the quality of food is really good. Come for coffee and a croissant in the morning, and a glass of wine and a steak at night.”

The name was chosen with a specific intention. “We wanted a strong woman’s name and Gertrude literally means ‘strength’, so it was quite easy after that,” Harmon says.

Initially, Gertrude will open 8am-4pm weekdays, Saturdays 11am-10pm and Sundays 11am-6pm. “The goal here, eventually, is to open from 7.30am to 11.30pm every day of the week,” Harmon says. “You could come in and have a three course meal, but we also want to be the kind of place where you can come in and have a starter and a glass of wine and leave.”

Holly Dalton, formerly head chef at the nearby 3fe on Grand Canal Street, leads the kitche team, with Barry McBride (formerly of My Boy Blue in Dingle and Plan B Killarney) her number two.

Industrial chic might best describe the ground floor of the building, where a coffee bar greets diners at the entrance and seating is a mix of high tables and stools and conventional restaurant tables. The open kitchen will eventually have dining stools at its counter.

Dalton, who started in kitchens when she was 15 and previously worked under Graham Neville at Restaurant FortyOne, is looking forward to working in an open kitchen. “You’re always asking waiters , are they liking it, or gimme some feedback – but with this, you’ll see people eating and be able to tell by their faces.”

The 1,500sq ft ground floor space is mirrored at basement level, not yet in use but giving the new enterprise plenty of room to expand. “We’ve got a 15-year lease here, so we’ve got time to grow into it,” says Harmon.

The menu offers three snacks, 12 main dishes, three sides and the same number of desserts. Morning diners will gravitate towards the fried breakfast with bacon and sausages from Whole Hoggs (€10), the soft scrambled eggs with crab (€12), or the buttermilk chicken pancake stack (€12).

The next few plates have an Asian slant. For the Tonkatsu sandwich (€10) a pork cutlet is marinaded for 24 hours, crumbed and fried, and served on sliced pan, made by nearby Bread Nation, who will also supply the pastries. Slow cooked duck is stuffed into steamed buns (€12).

More substantial plates include scampi fries (€18), spatchcock chicken to share (€35) and featherblade from Higgins Butchers with sage and mustardmash and silverskin onions (€20). Standout snacks and sides include Cooleeney croquettes with beetroot ketchup; bacon and cabbage dumplings (€6), and lemon pepper slaw (€4.50).

Dalton is making all of the sauces she will be using, including her versions of Kewpie mayonnaise (made with rice vinegar instead of white wine vinegar), tonkatsu sauce, green chilli relish, and good old brown sauce for the “Dirty Gertie” fried breakfast.

If you can’t make up your mind, a chef’s selection of four dishes: a snack, a main plate a side and a dessert, will be available for €36.

Considering the brevity of the menu, Gertrude has a weighty wine offering, pulled together by Peter Conway, formerly of Green Man Wines in Terenure and featuring 40 wines, sherries, vermouth and port.

“We present it in terms of gradient, so it starts with it starts with light whites and at the bottom are the heaviest reds,” Harmon says. There are plenty of natural and low intervention wines. The entry level glass of white is a Spanish verdejo for €7, with an additional euro spend on a tempranillo for those who prefer red.

“The coffee community in Dublin is getting really into wine and I’ve seen this in Australia and in London as well,” Harmon says, explaining the emphasis on the grape, and the absence, for the moment at least, of a beer offering. “We will have beer in time, but we want to start slowly and add things as we go.”