The Warrenmount Canteen: A school canteen with a real difference

Review: The Fumbally has made good food in cafes the norm. Now it wants to emulate that in schools 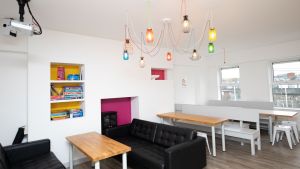 These are not my old school corridors but there’s a remnant of the thrill of being on school premises after dark as we walk up the stairs for dinner. It’s a throwback to school show nights when you could ramble through hushed corridors and classrooms, a giddy rush and a shifting of roles. Emptied of noise and people they were a glimpse of a future, when places steeped in the exquisite torture of being a teenager would fade to a set of quiet empty rooms.

It’s not the Breakfast Club but the lunchroom that we’re here to experience. Presentation Secondary School Warrenmount is an inner city girls’ secondary school in Dublin 8 where a local social enterprise is trying to do something radical with school dinners. The Warrenmount canteen is a long bright room with the feel and look of a canteen in a tech start-up. Next door there’s a beautiful teaching kitchen. There isn’t a sign of the grimy formica tables or the smell of Cup-a-Soup that I remember from my school lunchrooms.

Aisling Rogerson and Luca D’Alfonso of the nearby Fumbally Cafe took on this school canteen in September. It’s been their biggest food challenge yet. Warrenmount Canteen chefs Laura Caulwell and Harry Colley cook everything from scratch here every day. Like parents to dozens of picky eaters, they’re deploying every trick in their arsenal.

They’ve put on a “healthy” spice bag recently, roasting the chips in the oven and sprinkling over a spice mix without the nasties, all served in takeaway bags to recreate the chipper feel. They cooked off all the pumpkins from Halloween, put the puree in the freezer and are using it to create a sauce that looks convincingly orange enough to have come out of an Uncle Ben’s jar. They’ve smiled, joked, cajoled, got to know the girl who likes her lunch served with every element separate on the plate, nothing touching. Every day they get small wins in their mission to serve a good hot meal to their customers in the school canteen.

Caulwell left the Fumbally to be head chef at Storyboard in Islandbridge. Her food was so good it got my highest ever review score for a cafe. Along with classmate Cuan Greene, now a staff member in the kitchen of Restaurant Noma, Colley set up the Dublin Pop Up supper club, hosted With Relish, a food podcast with fellow Fumbally chef Aoife Allen and has been part of the Fumbally family for much of his cooking career.

Tonight it’s a long table dinner to showcase a project that’s going to grow outside the walls of the convent in the coming weeks. In an effort to keep the show on the road they will offer Warrenmount Canteen food to local businesses who can pre-order quantities of soups, soda bread, salads and hotpots and pick them up at the gate. Enough orders could maybe fund a delivery bike.

Tonight’s menu is a mix of middle eastern and Mexican starters, roasted chunks of crown prince squash with a putty thick labneh and dusting of subtle warm spices the colour of dry dust over the whole plate. The creamy tang of the thickened yoghurt, sweetness of the squash and the spice to wrap it all up in warmth makes for a perfect plate. There are corn tortillas with a fiery slick of tomatillo salsa, juicy wodges of sweet pork belly and shards of pickled red onion. They are the best tortillas I’ve had outside Mexico.

We do the mains canteen style, lining up with trays. The talk in the queue is of old-school desserts, queen of puddings, and bread and butter pudding with swollen raisins if you were lucky. At the hatch we get portions of two types of curry, one chicken one butternut squash, both delicious with a topping of shredded cabbage speckled with onion seeds.

Dessert is a bowl of apple crumble with custard, the stewed apple a cerise pink. Everyone at our end of the table has saved a space for it and bowls are almost licked clean. We’re gone by 9.30pm out into the neighbourhood heartened and hopeful at what we’ve seen, heard and eaten. The Fumbally has made good food in cafes the norm across Dublin. Now they want to make good food in schools the norm. If they can make it work here it’s a model that could be rolled out anywhere.

Fundraising dinner for two with wine and beer was €100