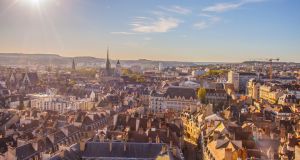 The last time I set foot in Burgundy-Franche-Comté my mother had just passed away.

I boarded a flight from Dublin to Paris, where I would connect by train on to Dijon and then to Beaune as my base, just the day after her funeral, when she had been laid to rest in Co Meath.

It was a red-eye flight from Dublin and making sure I was on it was a challenge in itself.

Hauling myself out of bed, the anxiety was pounding my heart out of my chest, with a natural inclination to avoid the effort needed to make a continental flight and train connection, allied with the carousing and social activity that often accompanies such travel.

But I did manage to get out of bed and onto the flight that day, and found myself sitting, teary-eyed and bleary-eyed, on a flight to a destination I had seen just once previously – with my mother, in fact, as a child.

I returned . . . to rekindle the memories that had been stoked in me during that week in 2014, and also to further examine a region that I adored last time

A trip that in my mind’s eye evoked memories of rolling hills dotted with vineyards and punctuated by fairytale-like castles and vistas.

That second trip back reinforced those memories, as I discovered as a grieving adult the beauty of those sights that my mother and father had shown me.

In fact, the trip was a revelation to me as I came to the realisation that this area, with its five renowned wine regions, was something quite special.

As was my base town, Beaune, with its cobbled, medieval streets, and atmosphere of high culture given its prestige in the wine industry.

However, this is a vast region of 2.8 million inhabitants, which stretches across north-eastern France, with Burgundy encompassing its western and central edge, and Franche-Comté making up the smaller body of the eastern segment of the region.

That eastern block is more off-the-beaten-track, with far fewer visitors, which makes it more appealing.

This year, four years later, I returned in a pilgrimage of sorts, to rekindle the memories that had been stoked in me during that week in 2014, and also to further examine a region that I adored last time.

This time my entry point was a town I had passed through last time around, on my way to Beaune – Dijon. Located almost slap bang in the centre of the region, 40 minutes’ drive north of Beaune, and above the main wine areas, most people tend to pass through this spot.

And they’re missing out. It doesn’t quite have the splendour of Beaune, but it does have plenty of charm of its own.

The town centre is compact and can be discovered quite easily in an afternoon on foot, where the highlight is the Palais des Ducs, most of which was built in the 17th and 18th centuries in a classical style, when the palace was a royal residence.

The Tour Philippe Le Bon (or Philip the Good Tower) can be seen by guided tour and gives stunning views out across the city, where one can observe the medieval centre melding into the more modern new-town fringes.

The other big draw in town is food, as so much of the region is. Dijon alone has 530 restaurants, making it a foodie haven. Restaurant l’Essentiel is run by chef Richard Bernigaud, who serves dishes such as crab with heirloom tomatoes and ricotta; followed by sirloin of beef, with beetroots in a local pinot noir reduction. Cheese in the various departments and towns of France is a singular experience and l’Essential has a daily changing cheese board.

Less than an hour’s drive south-east brings you into Franche-Comté, and Dole, arguably the nicest town in the area, with its magnificent Baroque collegiate church. Dole sits on the Doubs River, upon which one can take a ride on imported Venetian river taxis, which offer guided tours explaining the history of the town via its riverside architecture.

Again, dining options in the town are superb, with Grain de Sel one of the best eateries in the area, not just the town. On our visit, we dined on foie gras with Szechuan pepper, strawberry gel, and polenta dust; cod with cèpes (French porcinis) and butterbeans; followed by an apple-jelly pie, with Japanese lemon.

This was accompanied by local wine, which is markedly different to Burgundy. In Franche-Comté, it’s Jura wine that dominates, with red grapes of Trousseau (red fruits and wood) and Poulsard (full-bodied and fruity), and white grapes of Savignin (a mineral-strong flavour).

An hour’s drive from Dole lies Ray-sur-Saône, which is home to a totally out-of-the-way château, dating back to 1720, which is open and free to the public since 2015.

It’s in superb condition, with exhibits pertaining to life in the 16th century. It’s also surrounded by gardens that border the Saône River. A recently opened bike path, l’Echappée Bleue, now runs along the river from the northern starting point of Luxembourg down to Lyon, a route that passes right through Burgundy-Franche-Comté. I rented bikes from Ray-sur-Saône as far as Savoyeux (a 12km section of the route).

It’s only a short drive from there to Epenoux, located on the outskirts of Vesoul, the capital of the Haute-Saône département, and where one finds one of the highlights of the region: Château d’Epenoux.

Run by an Italian-speaking Swiss man, it’s the height of luxury. Dating from the 18th century, with traditional elements of the interior maintained, alongside some more modern creature comforts.

A swimming pool and outdoor gym are located on the grounds, which cater for those wanting an active holiday, or a way to work off all that Burgundian over-indulgence. Dining options are located 5km away in Vesoul, and a new restaurant is due to open in a building adjacent to the château in December.

A stint travelling north-east brings you to Fougerolles, home to 10,000 cherry trees, and quite appropriately, the opportunity to try the town’s unique version of kirsch at the Paul Devoille Distillery, established in 1859.

Set on more farmland, with a few goats nearby observing proceedings, the distillery offers guided tours of the production element including the ageing of the kirsch in glass bottles cradled in wicker baskets, before unleashing guests on the wide variety of kirsch and kirsch-related products available in the store, which includes liqueurs, creams, vodka, cherries, brandies, fruit brandies and even some rather pungent French whiskey.

The tasting will put you in a relaxed frame of mind to canter on towards Luxeuil-les-Bains, just 15 minutes’ drive up the road – once someone else is driving – a town famed for its thermal baths.

The structure of the baths is protected, with an exterior dating to the 18th century and an interior built in 1939. A range of treatments are offered, as well as the option to merely lounge in the mineral-rich waters, or unwind in their below-ground hamman or mineral-water jacuzzi. The town is also home to the now-derelict ruins of a monastery established by the Irish monk St Columbanus, with a part-restoration and museum to be open to the public by 2020.

An early start on the final day of my journey allowed me to reach Faucogney-et-la-Mer for early Sunday morning, a time when rural French towns resemble ghost towns.

Faucogny-et-la-Mer was the starting point for another cycling excursion, taking in part of the Plateau des Mille Étangs (Plateau of a Thousand Ponds), which was created 12,000 years ago, a result of glaciers of the Vosges retreating and leaving behind scrapes and scratches in the earth’s surface that have filled to create a water- and fish-rich landscape.

The local tourist office rents electric bikes, which make you feel like Lance Armstrong as you scale the Tour de France-worthy climbs around Faucogny-et-la-Mer to the 6th century l’Église St Martin (St Martin’s Church), built on a second-century pagan worship site and maintained as a church today.

The last supper - or lunch in this case, before an evening flight back home from Basel Airport - across the border in Switzerland - is Auberge des Mille Étangs. And the best is saved for last, in this case, in what is a spectacularly good restaurant, with accommodation available on an adjacent farm.

I had time to stop for food, but this beautiful lakeside setting certainly merits more time, spent hiking or fishing. We lunched on a five-course menu of local Morteau sausage and Macvin, a fortified white wine liqueur.

This area has something special that elevates it as a destination, the food alone ensures that, and each return visit allows one to delve further and further into one of the world’s great gastronomic regions.

Mind that cat – and its impact on wildlife
9